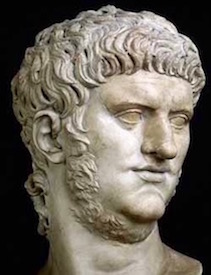 When Claudius died, Nero (left) became emperor on October 13, 54 AD when he was just 17 years old. The most vile of the Roman emperors, Nero committed every cide (“kill”) you can name: matricide, homicide and finally suicide in 66. He sexually corrupted little boys and murdered his mother, his wives, his lovers and other men so he could molest their wives. He was a fornicator, a homosexual, a cross-dresser and a pederast. The Roman historian Tacitus (c.56-117AD) who lived during Nero’s reign says: “Nero polluted himself by every lawful or lawless indulgence (and did not) omit a single abomination which could heighten his depravity.” Annals 14

His dying words, Qualis artifex pereo (“What a great artist dies in me”), illustrate how deluded this malevolent man was. Theatric and effete, he loved to dress up and recite poetry as he played the lyre. From his youth, Nero had fancied himself a great singer. As emperor, he constantly gave concerts in public places to captured audiences:

“While he was singing, no one was allowed to leave the theater even for the most urgent reasons. And so it is said that some women gave birth to children there, while many who were worn out with listening and applauding, secretly leaped from the wall, since the gates at the entrance were barred, or (they) feigned death and were carried out as if for burial.” Suetonius, Lives of the Caesars: Nero

Pertinent to the Quo Vadis story, Nero as Emperor had every thing, but he hated Rome and thought it looked like a pigsty. He envisioned Rome as Nero’s Golden City if he could only get rid of squalid, crooked, cramped Rome. He wanted a Rome of shining buildings, straight thoroughfares and clean streets. In 64 he instructed his lackeys to burn Rome to the ground so he could start over.

The fire started on July 19th in the wooden shops inhabited by cooks, astrologers and prostitutes in the southeast angle of the Circus Maximus. Tacitus, who was a young boy when Rome burned, gives an account:

“…the conflagration both broke out and instantly became so fierce and so rapid from the wind that it seized in its grasp the entire length of the circus….The blaze in its fury ran first through the level portions of the city, then rising to the hills, while it again devastated every place below them.

“…it outstripped all preventive measure; so rapid was the mischief and so completely at its mercy the city, with those narrow winding passages and irregular streets which characterized old Rome. Added to this were the wailings of terror-stricken women, the feebleness of age, the helpless inexperience of childhood, the crowds who sought to save themselves or others, dragging out the infirm or waiting for them, and by their hurry in the one case, by their delay in the other, aggravating the confusion…they found that, even places which they had imagined to be remote, were involved in the same calamity. 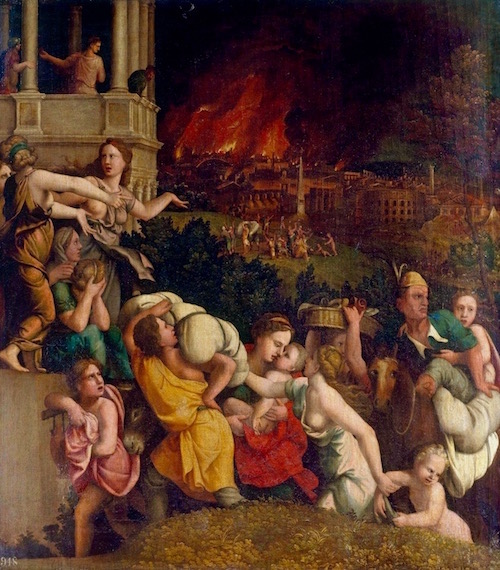 “…And no one dared to stop the mischief because of incessant menaces from a number of persons who forbade the extinguishing of the flames…others openly hurled brands and kept shouting that there was one who gave them authority….a rumor had gone forth everywhere that at the very time when the city was in flames, the emperor appeared on a private stage and sang of the destruction of Troy, comparing present misfortunes with the calamities of antiquity. 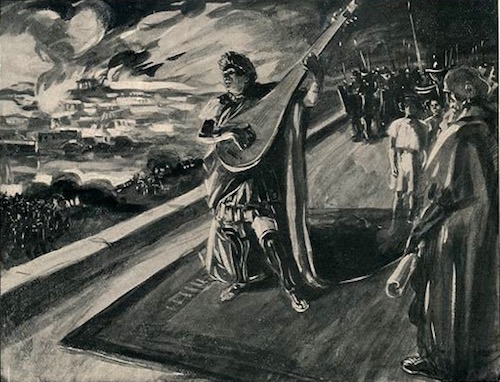 “At last, after five days, an end was put to the conflagration at the foot of the Esquiline hill, by the destruction of all buildings on a vast space, so that the violence of the fire was met by clear ground and an open sky. But before people had laid aside their fears, the flames returned, with no less fury this second time….the temples of the gods and the porticoes which were devoted to enjoyment fell in a yet more widespread ruin. 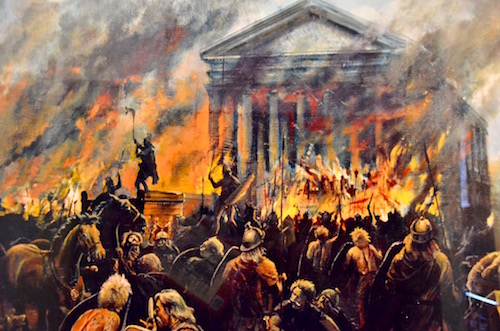 “And to this conflagration there attached the greater infamy because it broke out on the Aemilian property of Tigellinus (a co-conspirator with Nero in the burning of Rome), and it seemed that Nero was aiming at the glory of founding a new city and calling it by his name.” Annals 14. 38-40

“…while the whole people was in this state of excitement and many driven mad by the calamity were leaping into the blaze, Nero mounted upon the roof of the palace where almost the whole conflagration was commanded by a sweeping glance. (He) put on the professional harpist’s garb and sang ‘The Taking Of Troy’…although to common minds it seemed to be ‘The Taking Of Rome.’” Roman History 62.16-18

In the aftermath of the Great Fire, the Roman people suspected arson and they suspected their insane ruler Nero. The palace servants spread the word that “the emperor had fiddled while Rome burned.”

The people, already willing to believe that he had started the fire, became riotous. They chanted, “Nero Incendiarius, Nero Incendiaries” (“Nero the Arsonist”).

In order to stave off a public lynching, Nero immediately accused a new sect called “Christians” for burning the city. He rounded up Christians, wrapped them in pitch, dipped them in tar and burned them as torches for his dinner parties.

He sewed them in animal skins and threw them to the dogs at the circus near Vatican Hill. His cruelty was so extreme that the people began to have sympathy for the Christians.