The Forty Martyrs Of Sebaste—March, 320 AD

The Forty Martyrs of Sebaste (in modern-day Turkey) were soldiers in the Roman 12th Legion called “Fulminata,” “The Lightning or Thundering Legion.” Some believe the Legion was given that name by Marcus Aurelius after he experienced “the miraculous rain” event in c. 169. According to St. Basil’s Homily on The Forty Martyrs delivered   50 years after their martyrdom:

“These holy martyrs suffered at Sebaste, in the Lesser Armenia, under the Emperor Licinius in 320. They were of different countries, but enrolled in the same troop….were of the Thundering Legion, so famous under Marcus Aurelius for the miraculous rain and victory obtained by their prayers….on orders of the emperor Licinius for all to sacrifice (to the emperor), these forty went bold up to (their commander Lysias) and said they were Christians and that no torments should make them ever abandon their holy religion….The governor, finding them all resolute, caused them to be torn with whips and their sides to be rent with iron hooks….the governor, highly offended at their courage and that liberty of speech with which they accosted him, devised an extraordinary kind of death, which, being slow and severe, he hoped would shake their constancy. The cold in Armenia is very sharp, especially in March and toward the end of winter….there was also at that time a severe frost. Under the wall of the town stood a pond that was frozen so hard that it would bear walking upon with safety. The judge ordered the saints to be exposed quite naked on the ice; and in order to tempt them the more 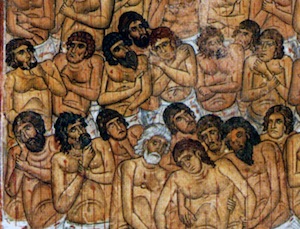 powerfully to renounce their faith, a warm bath was prepared at a small distance from the frozen pond for any of this company to go to who were disposed to purchase their temporal ease and safety on that condition. The martyrs, on hearing their sentence, ran joyfully to the place and without waiting to be stripped, undressed themselves, encouraging one another in the same manner as is usual among soldiers in military expeditions attended with hardships and dangers, saying that one bad night would purchase them a happy eternity….The guards in the meantime ceased not to persuade them to sacrifice….of the whole of the number only one had the misfortune to be overcome….A sentinel was warming himself near the bath….While he was attending, he had a vision of blessed spirits descending from heaven on the martyrs….The guard, being struck with the celestial vision and the apostate’s desertion, was converted….threw off his clothes and placed himself in his stead amongst the thirty-nine martyrs. In the morning the judge ordered both those that were dead with the cold, and those that were still alive, to be laid on carriages and cast into a fire….Their bodies were burned and their ashes thrown into the river; but the Christians secretly carried off or purchased part of them with money.”

The deaths of The Forty Martyrs have attracted veneration and artistic representation from the time of their martyrdoms until the present day. These very     young men, only one was   married, and their icy deaths was the last famous mass martyrdom of Christians. Forty naked, pale, shivering, stoic young men crowded together are painted on a wooden icon from the 4th century in the Musee des Beaux Arts in Paris. The small exquisite painting is signed by an unknown painter named Nikitarea. In the Forum in Rome is a small building called the Oratory of the Forty Martyrs. Dating from the 600’s, its walls are frescoed with the slim bodies of the young men whose arms are raised in praise. The years when martyred heroes adorned the underground walls of the catacombs in Rome subsided in the late 300’s, but in Syracuse, Sicily under the 4th century Church of St. John are hollowed out and hallowed catacombs where the Forty Martyrs grace the walls with their naked faith. The Forty Martyrs, like the martyrs on the walls of the catacombs in Rome and the sculptures and paintings of martyrs for the last 2,000 years, represent all Christian martyrs, past and present, whose willing martyrdoms and faithful renderings unto God the things that are God’s inspire the creative spirit.—Sandra Sweeny Silver