Matthew begins his Gospel: “A record of the origin of Jesus Christ, the son of David” (Matthew 1:1)… “Then the multitudes who went before and those who followed (Jesus) cried out, saying: ‘Hosanna to the Son of David!’” (Matthew 21:9 – on what we call Palm Sunday) 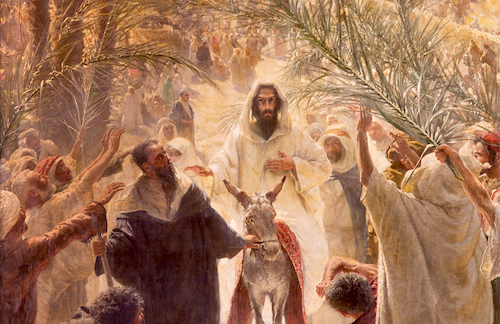 In Luke 1:32, the angel Gabriel in announcing to Mary her pregnancy said of her Son: “He will be great and will be called the Son of the Most High. The Lord God will give him the throne of his father David…”

King David (reigned c.1010-970 BC) was the most famous king in all of Israel’s history. In addition to the David and Goliath story and the David and Bathsheba story, David, as a musician and lyricist, is most known for his Psalms, a collection of sacred hymns and songs David composed. The Book of Psalms in the Old Testament is the most popular book in the Bible, even though it is the longest book in the bible.

Psalm 23 begins: “The Lord is my shepherd I shall not want….Yea, though I walk through the valley of the shadow death, I shall fear no evil for Thou art with me….” Many Christians and non-Christians know or recognize this famous Psalm written by a man who as a boy was a Shepherd.

But the Psalm preceding it, Psalm 22, is the subject of this article and most clearly illustrates Jesus as “the son of David.” David was the youngest son of a man called Jesse. In one of Isaiah’s predictions of the coming Messiah (700’s BC), he mentions David’s father Jesse: “And in that day there shall be a root of Jesse, which shall stand for an ensign of the people; to it shall the Gentiles seek: and his rest shall be glorious.” Isaiah 11:12

As a teenager David became a musician to King Saul and gradually rose from his lowly shepherd’s job to become King of all Israel. Both David and Jesus were shepherds. Jesus said of Himself: “I am the good shepherd. The good shepherd lays down his life for the sheep.” (John 10:11)  And keeps watch over his sheep by night. 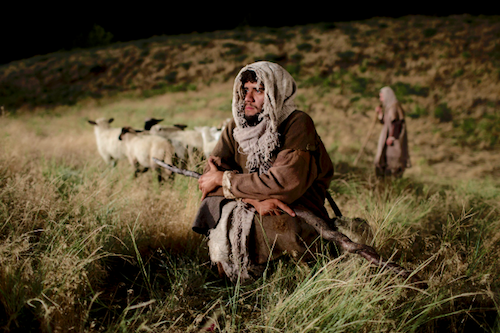 Many times in the New Testament Jesus is called “the son of David.” But to this writer Jesus acutely feels his kinship with David starting with David’s Psalm 22:1: “My God, my God, why have you forsaken me?”

On the Cross Jesus cried out: “And about the ninth hour (3 in the afternoon), Jesus cried out with a loud voice, ‘Eli, Eli, lama sabachthani?’ that is, ‘My God, my God, why hast thou forsaken me?’” Mark 15:34

Some believe Jesus cried those words of being forsaken by God on the Cross because at that time Father God laid the sins of mankind on Him and God cannot look on sin and thus Jesus was separated from His Father at that time. If that is so, then when Jesus said, “I and the Father are one” in John 10:30, that is not true and all “theology” about Jesus is jeopardized.

Those who heard Him cry those words and were Bible literate like most Jews at that time knew exactly what He was saying and knew King David had said it.

David’s Psalm 22 personifies a man who was existentially experiencing what Jesus was feeling and experiencing on the Cross. So much of that Psalm prognosticates Jesus on the Cross. And ALL the words of that Psalm must have been an encouragement to Jesus as He hung on the Cross. Perhaps He mimicked those very words as a hint, as a remez in Hebrew, to those priests and the few who believed in Him who were there with Him at the foot of the Cross—was a remez/a hint to them and to us to read the entire Psalm 22 and know how Jesus was thinking in His mind as He suffered.

Jesus certainly heard all the mocking and the words hurled at Him. (From Psalm 22:7, 8 written c.1,000 years before Jesus’ crucifixion.) 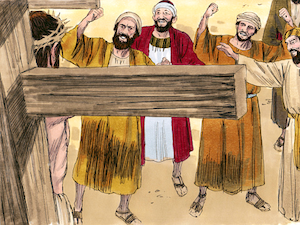 “All who see me mock me;
they hurl insults, shaking their heads.
‘He trusts in the Lord,’ they say,
‘let the Lord rescue him.
Let him deliver him,
since he delights in him.’”

The Apostle Mathew (died c. 74 AD) who was, perhaps, far away watching and maybe hearing Jesus on the Cross recounts: 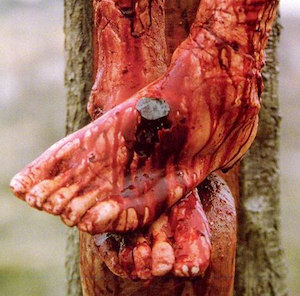 “Those who passed by hurled insults at him, shaking their heads and saying, ‘You who are going to destroy the temple and build it in three days, save yourself! Come down from the cross, if you are the Son of God!’ In the same way the chief priests, the teachers of the law and the elders mocked him. ‘He saved others,’ they said, ‘but he can’t save himself! He’s the king of Israel! Let him come down now from the cross, and we will believe in him. He trusts in God. Let God rescue him now if he wants him, for he said, ‘I am the Son of God.’” Matthew 27:39—43

Jesus knew those words David had written of Him in Psalm 22 and for comfort and strength he HELD ON TO DAVID’S WORDS IN PSALM 22 the 6 hours (9 AM—3PM). He was nailed to a Cross and suffered the results of a crucifixion:

“I am poured out like water, and all my bones are out of joint. My heart has turned to wax; it has melted away within me. My strength is dried up like a potsherd, and my tongue sticks to the roof of my mouth; you lay me in the dust of death. Dogs have surrounded me; a band of evil men has encircled me, they have pierced my hands and my feet. I can count all my bones; people stare and gloat over me. They divide my garments among them and cast lots for my clothing. But you, O LORD, be not far off; O my Strength, come quickly to help me.” Psalm 22:14-19

Our word “excruciating” comes from the word “crucifixion” demonstrating a slow and extremely painful death. In this Psalm David prognosticates a form of execution (crucifixion) in Verse 16, which was not known to David because Crucifixion as a means of public execution was not “invented” until c. 400 BC—c. 600 years AFTER David was born.

When Psalm 22:15 says, “…my tongue sticks to the roof of my mouth,” it means “I am dying of thirst.” The Apostle John who was the ONLY one of his Apostles who followed Jesus to the Cross says in his Gospel of John:

“Later, knowing that all was now completed, and so that the Scripture would be fulfilled, Jesus said, ‘I am thirsty.’ A jar of wine vinegar was there, so they soaked a sponge in it, put the sponge on a stalk of the hyssop plant, and lifted it to Jesus’ lips.” (John 19:28, 29)

John was obviously aware of Jesus’ forefather David’s Psalm 22 and of another Psalm of David: “They put gall in my food and gave me vinegar for my thirst.” (Psalm 69:21)

And the soldiers who crucified Jesus did “cast lots for His clothing”: “When they had crucified him, they divided up his clothes by casting lots.” Matthew 27:35

The end of Psalm 22 ends in PRAISE and in FUTURE HOPE. When Jesus was dying, perhaps the verses at the end of David’s prophetic Psalm were running through His mind. His Father had NEVER abandoned Him (“he has not hidden his face from him but has listened to his cry for help”).

In His last gasps of human life, Jesus, this son of the Psalmist David, KNEW the future:

“Posterity will serve him; future generations will be told about the Lord” and KNEW the everlasting results of His death upon the Cross. And it was all worth it:

“I will declare your name to my brothers; in the congregation I will praise you. You who fear the LORD, praise him! All you descendants of Jacob, honor him! Revere him, all you descendants of Israel! For he has not despised or disdained the suffering of the afflicted one; he has not hidden his face from him but has listened to his cry for help.

From you comes the theme of my praise in the great assembly; before those who fear you will I fulfill my vows. The poor will eat and be satisfied; they who seek the LORD will praise him–may your hearts live forever!

Posterity will serve him; future generations will be told about the Lord. They will proclaim his righteousness to a people yet unborn— for he has done it.” Psalm 22:22-31

“After this, Jesus, knowing that all things were now accomplished, that the Scripture might be fulfilled, said, ‘I thirst!’ Now a vessel full of sour wine was sitting there; and they filled a sponge with sour wine, put it on hyssop, and put it to His mouth. So when Jesus had received the sour wine, He said, ‘It is finished!’ And bowing His head, He gave up His spirit.” John 19:28-30

And “the afflicted, pierced one” did “fulfill His vows” in His triumphant cry right before He died: “IT IS FINISHED!” (“He has done it.” Psalm 22:31)

In Greek the above phrase is Tetelesta meaning “to bring to an end, to accomplish, to complete.”

“Charles Haddon Spurgeon was an English Particular Baptist preacher. Spurgeon remains highly influential among Christians of various denominations, among whom he is known as the “Prince of Preachers.”

Spurgeon on Psalm 22: “This is beyond all others THE PSALM OF THE CROSS….Before us we have a description both of the darkness and of the glory of the cross, the sufferings of Christ and the glory   which shall follow. Oh for grace to draw near and see this great sight! We should read reverently, putting off our shoes from off our feet, as Moses did at the burning bush, for if there be holy ground anywhere in Scripture it is in this psalm.”—Article by Sandra Sweeny Silver