The first twins in the Bible were Jacob and his fraternal twin Esau. They were born around the late 1990’s BC to Abraham’s son Isaac and his 2nd cousin Rebekah. Before the twins were born, “the babies struggled together within” Rebekah’s womb. (Genesis 25:21-34) When they were born, Esau came out first and Jacob came out grasping Esau’s heel. “Jacob” means “the supplanter,” and Jacob did over the years take away Esau’s primogenitor rights as the first born.

It did not help the brothers’ innate hostility to each other that their mother Rebekah preferred Jacob and Esau was the favorite son of Isaac. Esau, who fathered the Arabs, and Jacob, who fathered the Jews, were always “struggling” together as they are 4,000 years later in our day.

In Greek mythology the twins Castor and Pollux were so inseparable that when mortal Castor was killed, Pollux asked his father Zeus to let Castor share his own immortality. Zeus granted his son that wish and they were both changed into the constellation in the night sky known as Gemini, Latin for “twins.” The immortal king of the gods, Zeus had disguised himself as a swan and raped their mother Leda. Apparently at the same time Leda had sex with Tyndareus, the mortal king of Sparta. The boys, one immortal (Pollux) and the other mortal (Castor), emerged from one egg, so they were identical twins. We are talking “myth,” meaning “anything delivered by word of mouth” here, readers.

In the United States 2% of births were twins from 1915 to 1981. Beginning in 1995 the percentage of twin birth rates began to increase until in 2010 the birth rates of twins had jumped to 3.3%, over a million more sets of twins born yearly than in the years 1915-1981. The cause—the growing use of reproductive technology. The highest birth rate of twins in the world, unassisted by reproductive technology, is in the central African county of Benin where twins are 27.9 twins out of every 1,000 births. The lowest birth rate of twins in the world is in south and southwest Asia and Latin America where there are 6-9 sets of twins for every 1,000 births.

The complete skeleton of a Neolithic woman was found in 1997 near Irkutsk in Siberia. Upon examination it was found she was in her mid-twenties and had died during childbirth. A set of twins were found in her pelvic region. One of the babies had tried to present feet first and the other child was head first. As a result, all three had died. It is probable that whomever tried to deliver the breech birth did not know she had twins.

In August of 79 AD Mt Vesuvius erupted and buried in ash the ancient cities of Pompeii and Heculaneum. 50 skeletons were found in an underground cellar in Pompeii where they had obviously taken refuge. The bones of twins were found huddled together.

Twins were the first rulers of Sparta (c. 900-192 BC), a city-state in ancient Greece. For generations the Spartans carried on the tradition of twins as rulers. It was mythologized that the first and ensuing twin rulers all were descended from celestial twins. The most famous twins in the ancient world were Romulus, the eponymous founder of Rome, and his twin Remus. They were abandoned by their mother who placed them in a rush basket and left them afloat on the river. When the water receded, a she-wolf found them and suckled them with her teats until a shepherd discovered them and he and his wife raised them as their own sons.

As the twins grew to adulthood, they were obstreperous. They ended up founding Rome with a rag-tag group of guys. Romulus killed his twin Remus. The ancient Romans were proud their founder was suckled by a she-wolf and felt the animal part of him, his daring, fearlessness and fiery temper, was why Romans eventually conquered the whole known world.

In John 11:16 in the New Testament one of the twelve Apostles is called Thomas in English. In Hebrew his name is “Tauma” meaning “twin.” When the New Testament was written in Koine Greek, the Hebrew “Tauma,” meaning “twin” was translated into Greek as “Didumos” that means in Greek “twin.” It would be strange to name a child “Tauma” if he was not a twin. 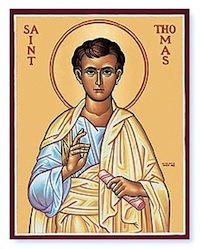 For thousands of years scholars have been baffled by the question: who was Thomas’ twin? There have been many theories: Thomas’ twin was his Oneness with God; Thomas’ complete name was Judas and Judas (not the Judas who betrayed Christ) was his twin’s name; Thomas was Jesus’ twin brother, an absurd assertion leading to absurd theological conundrums. The long and the short of it is: we have no idea who was Thomas’ twin.

In Romans 16:12 Paul in this letter greets “Tryphena and Tryphosa, those women who work hard in the Lord.” Most have assumed these two women were twins who were in Rome and were working “hard in the Lord,” were strong women involved in evangelism and in service to the nascent church in Rome. That is all we know of those two twins.

There is a curious entanglement of triplets in the womb from a copy of Muscio’s (c. 500 AD) Gynaecia, in the Bibliotheque Royale de Belgique from the 800‘s AD. The triplets appear to be about 12-14 years old and the womb itself appears to have horns.—Sandra Sweeny Silver