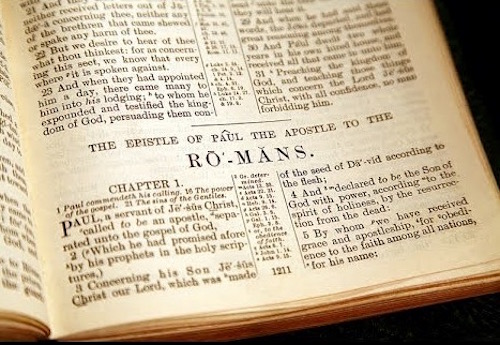 The Book of Romans in the New Testament was written by the Apostle Paul to Christian Jews and Gentiles in Rome c. 57 AD.

Romans 15:15:23-28: “But now that there is no more place for me to work in these regions (around Corinth), and since I have been longing for many years to visit you,  I plan to do so when I go to Spain. I hope to see you while passing through and to have you assist me on my journey there, after I have enjoyed your company for a while…. So after I have completed this task and have made sure that they have received this contribution, I will go to Spain (Spanian in the Greek) and visit you (in Rome) on the way.” 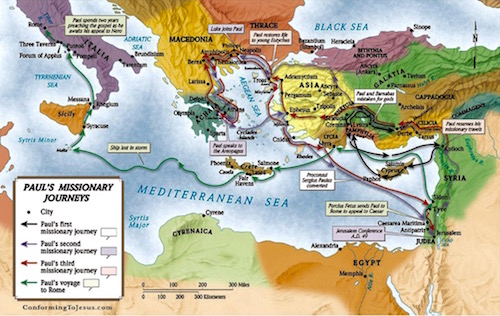 As can been seen from this map, Paul had evangelized his entire Middle Eastern neighborhood and had even entered Europe through Greece. Paul says in Romans 15:23, 24: “But now that there is no more place for me to work in these regions….I plan to…go (as far as one could go West) to Spain.”

In his ministry Paul covered by land and sea about c. 10,000 miles and had spread the Good News of Jesus’ Resurrection across the Middle East.

Paul makes clear in the opening passage of this article that he had not been to Rome previously and, thus, was not the founder or one of the founders of the Church in Rome. That Roman Christian “church” was formed at Pentecost, 40 days after the Resurrection: 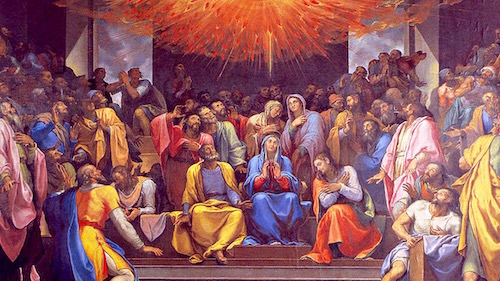 “Now there were staying in Jerusalem (for Pentecost) God-fearing Jews from every nation under heaven.  When they heard this sound, a crowd came together in bewilderment, because each one heard their own language being spoken.  Utterly amazed, they asked: ‘Aren’t all these who are speaking Galileans?  Then how is it that each of us hears them in our native language?  Parthians, Medes and Elamites; residents of Mesopotamia, Judea and Cappadocia, Pontus and Asia,  Phrygia and Pamphylia, Egypt and the parts of Libya near Cyrene; visitors from Rome (both Jews and converts to Judaism); Cretans and Arabs—we hear them declaring the wonders of God in our own tongues!’  Amazed and perplexed, they asked one another, ‘What does this mean?’…. Those who accepted (Peter’s) message were baptized, and about three thousand were added to their number that day.” Acts 2:5-12, 41

Including the Jews and Gentile converts to Judaism from Rome, so many small Christian congregations were formed, as one can see from the different countries gathered to celebrate Pentecost.

Paul writes to the Roman Christians he will be “passing through” Rome on his way to Spain. However, Paul is arrested when he goes to Jerusalem and spends about    two years (c. 57-59) in a Roman prison in Caesarea Maritima before he is shipped off to Rome for trial before a Roman court (Acts 25). So Paul’s “best-laid plans” to go through Rome of his own volition and then on to Spain were interrupted by God.

And Paul’s Biblical journeys after his release from prison and his martyrdom are not recorded after Luke, the author of the Book of Acts, leaves him in Rome in his “own rented house for two whole years.”

“For two whole years ( c. 60-62) Paul stayed (in Rome) in his own rented house and welcomed all who came to see him. He proclaimed the kingdom of God and taught about the Lord Jesus Christ—with all boldness and without hindrance!” Acts 28:30,31

There is no incontrovertible evidence that after Paul spent his two years in his rented house in Rome that he then left for Spain. Some argue that because Paul “intended” to go to Spain that he actually did go to Spain because God had put that intent into him. This is a shaky argument. Just because Paul or anyone intends to go someplace does not mean that it is God-inspired. Paul “intended” to go several places, but God said “NO:” 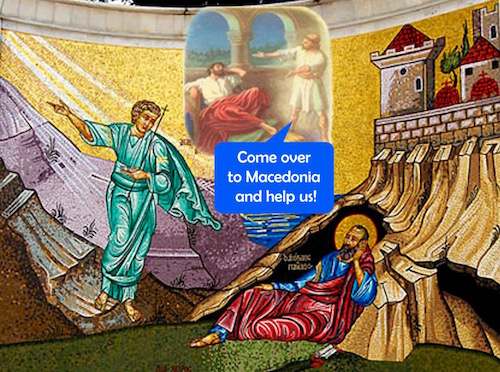 “Paul and his companions traveled throughout the region of Phrygia and Galatia, having been kept by the Holy Spirit from preaching the word in the province of Asia.  When they came to the border of Mysia, they tried to enter Bithynia, but the Spirit of Jesus would not allow them to.  So they passed by Mysia and went down to Troas.” (Acts 16:6-8) And, of course, it was at Troas that God told Paul through a vision where HE really wanted Paul to go—Europe. (Acts 16:9-12)

We have no Biblical evidence that Paul left Rome after his first imprisonment and went West to Spain, but we do have a few ancient texts that either imply or assert Paul did go to Spain. One of the earliest references is by Clement of Rome, a co-worker with Paul, who is mentioned in Philippians 4:3: “Yes, and I ask you, my true companion, help these women since they have contended at my side in the cause of the gospel, along with Clement and the rest of my co-workers, whose names are in the book of life.” Apparently Clement, Paul’s co-laborer, became the Bishop of Rome (88-99) and is one of the earliest Apostolic Church Fathers (men who had personally known one of the Twelve Apostles or Paul) whose writings survive.

“Because of jealousy and strife, Paul, by his example, pointed out the way to the prize for patient endurance. After he had been seven times in chains, had been driven into exile, had been stoned and had preached in the East and in the West, he won the genuine glory for his faith, having taught righteousness to the whole world and having reached the farthest limits of the West. (‘to terma tes duseos’) Finally, when he had given his testimony before the rulers, he thus departed from the world and went to the holy place, having become an outstanding example of patient endurance.” 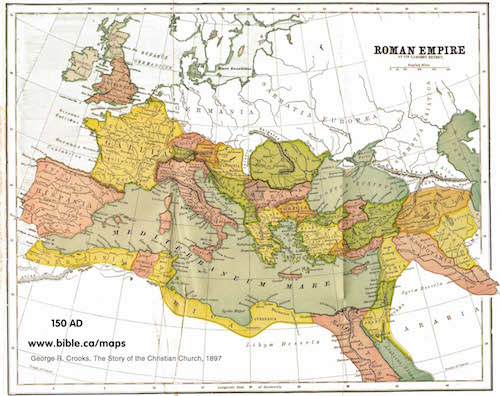 The “farthest limits of the West” at that time would have been Spain (Latin Hispania) on the Atlantic Ocean.

Less than one hundred years after Clement the Muratorian Canon/ Fragment (c. 170 AD), a listing of those writings which were part of the New Testament Canon at that time in Christian history, mentions as fact that Paul did go to Spain:

“Moreover, the acts of all the apostles were written in one book (Acts). For ‘most excellent Theophilus’ Luke compiled the individual events that took place in his presence—as he plainly shows by omitting the martyrdom of Peter as well as the departure of Paul from the city (of Rome) when he journeyed to Spain.” The Muratorian Canon 34-39

Cyril of Jerusalem (c. 315-386), an Early Church theologian in Jerusalem, passes on the belief that Paul went to Spain: “…(Paul), who from Jerusalem, and even unto Illyricum, fully preached the Gospel, and instructed even imperial Rome, and carried the earnestness of his preaching as far as Spain, undergoing conflicts innumerable, and performing signs and wonders.” Catecheses, Lecture 17.26

Chrysostom, (347-407), Archbishop of Constantinople, apparently one of the most talented preachers in all of Christian history records: “For after he (Paul) had been in Rome, he returned to Spain, but whether he came thence again into these parts, we know not.” Second Timothy, Homily 10

We know the Archbishop in English as Chrysostom, but that is an epithet coming from the Greek Χρυσόστομος Chrysostomos, meaning “golden-mouthed” which attested to his brilliant preaching skills.

Many other ancient Christian writers asserted Paul went to Spain. Jerome ( 342-460), the ascetic-in-his-golden-years scholar who translated the 39 books of the Old Testament and the 4 Gospels in the New Testament from Hebrew and Greek into Latin and is credited as the author of the Roman Catholic Vulgate Bible, stated: “St. Paul having been in Spain, went from one ocean to another.” Amos, cap.5

Whether Paul fulfilled his dream of evangelizing the East AND the West as far as Spain is tradition with positive evidence from the quotes of many authors through the centuries. This writer says, yes, Paul did go to Spain for several years after his first Roman imprisonment in c. 60-62.

By the time Paul returned to Rome from this missionary journey, Nero had burned Rome to the ground in July of 64. The outcry among Romans was so great, Nero deflected the blame to Christians and started the Imperial Persecution of Christians.

As prominent men in the nascent Church in Rome, Paul, as well as Peter, were caught up in the maelstrom that surrounded the fiery chaos and Peter was crucified upside down as he had requested and Paul was beheaded, the quick death accorded Roman citizens like Paul.

Paul, a soldier in His Lord’s army, wrote in c. 61 to the new believers in the church he had founded in Ephesus: “Take…the sword of the Spirit, which is the word of God.” (Ephesians 6:17) So armed, Paul continued his missionary journeys and spread the Gospel—probably even as far as Spain.—Sandra Sweeny Silver 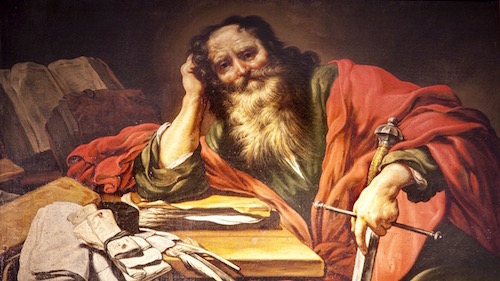