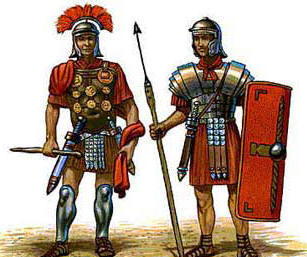 The Roman soldier was not only expected to be an excellent fighter but he was required to be a competent builder, engineer and worker.

Fighting in the Roman army was competitive and done for the sake of virtus. Virtus, from which we get our word “virtue,” was manly courage and excellence. Disciplina, the handmaiden of virtus, meant self-control, determination and an orderly way of doing things. The Roman soldier strove to be confident, manly, courageous and resourceful in battle. But they were expected, also, to build roads and bridges, to clear forests and to build walls.

The soldiers were required to cut off the heads of important enemy fighters when killed. The severed heads of enemies encouraged the soldiers to work harder to build the roads they needed to further penetrate enemy territory. And to conquer, win the war.

Roman soldiers competed with each other for the honors and recognition conferred for virtus and disciplina. During the Battle for Jerusalem in 70 AD, the Roman General Titus, frustrated by the time it was taking to conquer Jerusalem, decided the Romans had to build a wall around the whole city of Jerusalem:

“Titus determined that they must build a wall round about the whole city….(and) if any should think such a work to be too great…he ought to consider that it is not fit for Romans to undertake any small work.” Josephus, Wars 5.12.1 In only three days the Roman army built a five-mile wall around Jerusalem. Josephus says: “…it is incredible that what would naturally have required some months was done in so short an interval.” Ibid. 5.12.2

The wall was built in such a short time because each section of the wall was assigned to a specific Legion and each Legion competed with the other Legions for the awards of disciplina. Each Legion was divided into ten Cohorts. Each Legion assigned a portion of the wall to each of its ten Cohorts. Not only were the Legions competing against each other for pay and for glory, but the individual Cohorts within a Legion competed with each other. So all Cohorts in each Legion and all the Legions in the army were competing against each other for the money, the rewards and, most importantly, for the approval of their superiors and of their General, their supreme commander.

A Roman historian who would write about Rome’s military has a treasure-trove of ancient information about Roman military life artistically embedded in the bas reliefs of the 2nd century Trajan’s Column (Trajan was Emperor from 98-117 AD). The 115 foot high Column still survives and stands in Trajan’s Forum in Rome.

The Column, depicting scenes from Trajan’s Dacian wars (101-102 and 105-106), has 155 separate scenes on it. Notice the intimate details of the soldier’s lives depicted on just this small portion of Trajan’s Column. 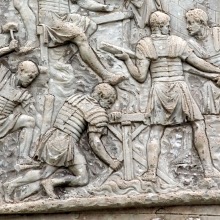 Roman soldiers did every thing that had to be done to wage a successful war. During the Trajan’s Dacian Wars a bridge had to be built over the Danube River in order to be able to reach Dacian territory (today a large part of eastern Europe). Soldiers were expected to be workers, implement construction designs and do every thing. Here they are (left) in c. 101 constructing a bridge to span the Danube River.

And here (below) is the Danube river god, Danuvius, watching the soldiers march over the bridge they built.

Trajans’ Greek architect Apollodorus designed the 2,724 foot bridge and Roman soldiers built it in 105 AD. It was a segmental arch bridge that helped win the war over the Dacians. For more than 1,000 years it was the largest arch bridge ever built.

Below is a relief of the bridge on Trajan’s Column showing the unusually flat segmental arches on high-rising concrete piers. Emperor Trajan is in the foreground with his soldier-construction workers. 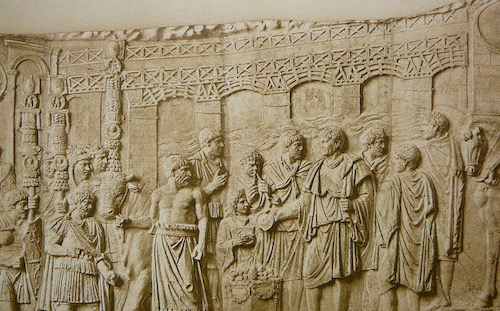 When the army was in a country for a long time, the soldiers had to build their own fort (below). 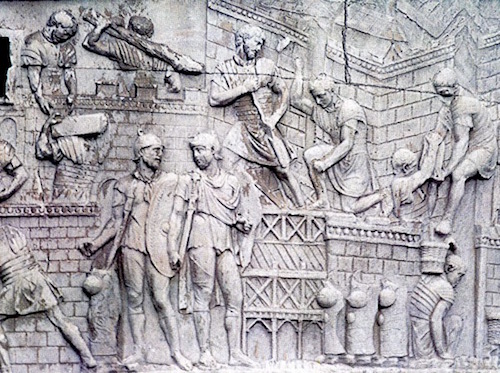 Clearing forests, fjording rivers and streams, building bridges, roads, walls, forts—the amazing Roman soldiers did it all. Plus they fought and won the battles that made them masters of 70 million of the people in the ancient world.

The Roman Empire at its height extended 2.2 million miles. Roman soldiers had to walk those miles and fight those wars to make Rome one of the biggest empires in the history of the world.—Article by Sandra Sweeny Silver