He immediately started to build himself a “home” and grounds. He confiscated large tracts of aristocrat’s land and built over the ruins of a large part of Rome’s ashes.

The Romans were not only superb in conquering but were astonishing builders/engineers/architects of roads and buildings. Nero’s home, the Domus Aureus (Golden House) had 140 rooms each with a different theme and each room was 36 feet high. Nero had the countryside right in his own complex. The Romans loved rus in urbe, the “countryside in the city.” His property contained an artificial lake, vineyards, groves of trees and pasture land with flocks of animals lazily feeding.

Suetonius (69—126) gives a description of Nero’s Golden House and grounds which covered land equivalent to about 300 football fields:

“Its size (c. 300 acres) and splendor will be sufficiently indicated by the following details. Its vestibule was large enough to contain a colossal statue of the emperor 120’ high….(the house) was so extensive that it had a triple colonnade a mile long. There was a pond, too, like a sea, surrounded with buildings to represent cities, besides tracts of countryside, varied by tilled fields, vineyards, pastures and woods, with a great number of wild and domestic animals.

In the rest of the house all parts were overlaid with gold and adorned with gems and mother-of-pearl. There were dining rooms with fretted ceilings of ivory whose panels could turn and shower down flowers and were fitted with pipes for sprinkling the guests with perfumes. The main banquet hall was circular and constantly revolved day and night like the heavens. He had baths supplied with seawater and sulphur water. When the edifice was finished in this style and he dedicated it, he deigned to say nothing more in the way of approval than that he was at last beginning to be housed like a human being.” Suetonius, Lives Of The Caesars: Nero

The 120’ nude, bronze over-laid with gold and silver statue of Nero graced the vestibule of his Golden House. It was so huge the people called it the Colossus meaning “gigantic.” That nickname gradually became the site-name of Emperor Vespasian’s Amphitheater, the Colosseum in the 70’s AD. Future Emperors preserved some of Nero’s Golden House, but in the 500’s Rome was overtaken by invaders who gradually covered the area with other buildings and dirt and it became entombed. In the late 1400’s a young boy fell into a hole in the hill and Nero’s palace was then discovered and admired for its paintings. Raphael, Ghirlandaio and other painters went to Rome and studied the astonishing art in those “caves.” Their paintings were influenced by the artists who had adorned Nero’s “humble home” over a millennium ago. 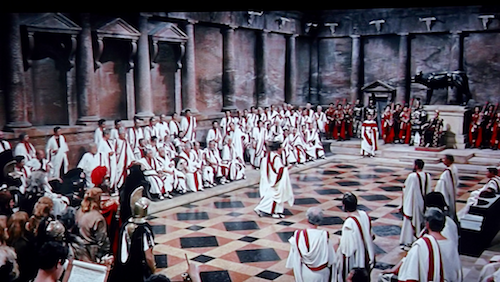 When Nero found out he would be:

“…stripped, fastened by the neck in a fork and then beaten to death with rods, in mortal terror Nero seized two daggers which he had brought with him, and then, after trying the point of each, put them up again, pleading that the fatal hour had not yet come. Now he would beg Sporus to begin to lament and wail, and now entreat someone to help him take his life by setting him the example; anon he reproached himself for his cowardice in such words as these: ‘To live is a scandal and a shame — this does not become Nero, does not become him — one should be resolute at such times — come, rouse thyself!’ And now the horsemen were at hand who had orders to take him off alive. When he heard them, he quavered: ‘Hark, now strikes on my ear the trampling of swift-footed coursers!’ and drove a dagger into his throat, aided by Epaphroditus, his private secretary. He was all but dead when a centurion rushed in, and as he placed a cloak to the wound, pretending that he had come to aid him, Nero merely gasped: ‘Too late!’ and ‘This is fidelity!’ With these words he was gone, with eyes so set and staring from their sockets that all who saw him shuddered with horror.” Suetonius, Lives: Life of Nero 49—Article by Sandra Sweeny Silver

Jeremiah 22:13
“Woe to him who builds his house without righteousness And his upper rooms without justice.”

James 5:5
“You have lived luxuriously on the earth and led a life of wanton pleasure; you have fattened your hearts in a day of slaughter.”

Proverbs 15:6
“Great wealth is in the house of the righteous.”