“All that glitters is not gold.” But the glint of that earth-enclosed metal has sent man-kind on wild goose chases —forever. Sometimes people did find gold. When the Spanish entered South America in the 1500’s, the Inca Indians told them of a mystical Muisca tribal chief who covered himself with gold dust on his raft  and then went into  the water as an initiation rite. He became El Rey Dorado, “the Golden King.” As the golden legend continued, GOLD went from a man to a city and then to an empire in South America that was filled with gold. So that search for El Dorado, for gold, began.

It might not be an entire city/country made of gold, but the intricate “Muisca Raft” (pictured below)) supposedly tells the story of a chieftain covering himself in gold dust and diving into Lake Guatavita, Colombia. Notice the huge disparate timelines  for this intricate golden piece—600-1600 AD. 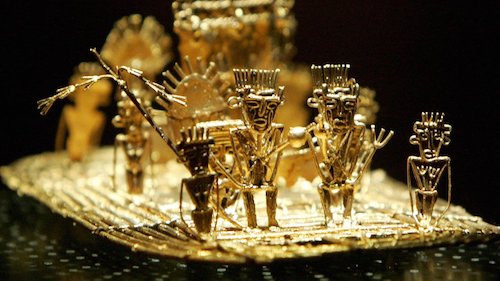 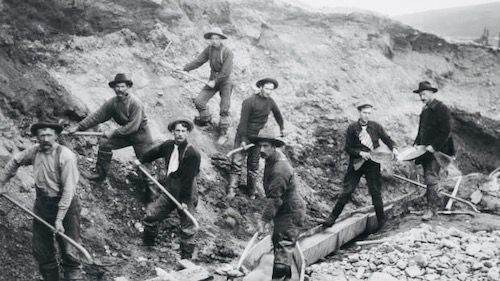 There is from the very ancient BC world a legendary place called Ophir where gold was  found by the Phoenicians who dominated the world of trade in the 900’s BC and before that. By the way, the Phoenician alphabet is the origin of the Greek alphabet and thus of our alphabet—our abc’s. That’s how powerful and universal Phoenician trading contracts were thousands of years ago. The word “alphabet” comes from the beginning of the Greek alphabet—“Alpha, Beta.”

At that time the “Phoenician” king was King Hiram  (Reign: 980–947 BC) who ruled Sidon in Lebanon and had made an alliance with King David who ruled the Jews. When King David died, his son Solomon continued the alliance.

Why not?  “Also, the (Phoenicians) ships of Hiram, which brought gold from Ophir, brought great quantities of almug wood and precious stones from Ophir” (1 Kings 10:11).

He also had a lot of ships at Ezion-Geber, a town in Edom near Eloth on the Red Sea. King Hiram let some of his experienced sailors go to the country of Ophir with Solomon’s own sailors, and they brought back about sixteen tons of gold for Solomon.” I Kings 9:25-28

Central Banks added nearly 32 tons of Gold to Reserves in April of 2020—the same amount Solomon added to his coffers thousands of years ago. 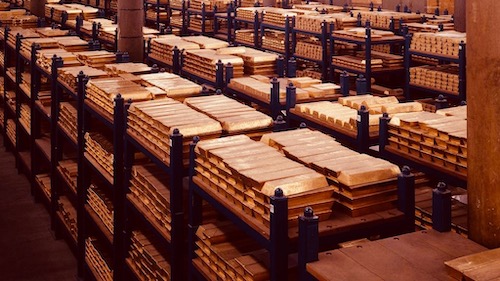 In I Kings 10:22 it seems that Solomon’s and Hiram’s sailors made many trips to Ophir as well as to other places:

“For the king (Solomon) had merchant ships at sea with the fleet of Hiram. Once every three years the merchant ships came bringing gold, silver, ivory, apes, and monkeys.” 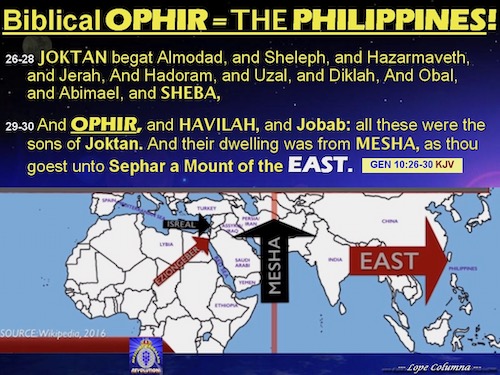 But it is interesting that in the first book of the Bible in Genesis when it is discussing the original Garden of Eden where the FALL happened it says:

“A river watering the garden flowed from Eden; from there it was separated into four headwaters. The name of the first is the Pishon; it winds through the entire land of Havilah, where there is gold. The gold of that land is good; aromatic resin and onyx are also there.” Genesis 2:10-12

“David Rohl identified Pishon with the Uizhun (River), placing Havilah to the northeast of Mesopotamia. The Uizhun is known locally as the Golden River. Rising near the stratovolcano Sahand, it meanders between ancient gold mines and lodes of lapis lazuli before feeding the Caspian Sea. Such natural resources correspond to the ones associated with the land of Havilah in Genesis. If land of Cush is today Kuzestan, then Pishon is the name of the Persian Gulf. Havila is Arabia and Gihon is the Red Sea and Indian Ocean.”— Wikipedia

Perhaps we should be searching for Havilah instead of Ophir?