An English  translation from the ancient Greek Papyrus Oxyrhynchus 3035: “From the governor to the village rulers and officers of peace of the village of Mermerthon. At once send up Horus a Christian, or you yourselves come up. During the third year of Valaerian and Gallienus the August 7 Phamenoth.”

In the Gregorian Calendar the date issued from the ruling council in Oxyrhynchus to the police in a small village as a warrant for the arrest of “Horus  a Christian” is February 28, 256 AD.

One wonders if Horus denied his faith and sacrificed to the Emperor (then Emperor Valerian—253-260). Some did sacrifice to the Emperor to avoid a horrible death. They were called “LAPSII,” those who had not persevered in their faith in Christ.

Octavian Augustus, who was Caesar when Jesus was born and came of age (Luke 2:1), ruled from 27 BC to 14 AD and was declared “divine.” All the successive Emperors either declared themselves divine or were called by the Senate and people “Divine.” 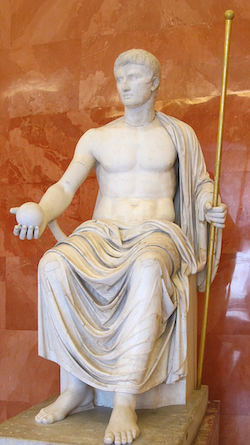 To the left is a statue of Emperor Caesar Augustus as Jove, the king of the gods, holding scepter and orb—First half of 1st century AD.

For the next three hundred years temples were built and sacrifices were made to the Emperors. Julius Caesar had allowed a statue of himself to be made with the inscription “Deo Invicto” on it. “The unconquered god” became the description of the Emperors of Rome. The many gods and goddesses of the Roman pantheon now had a flesh and blood brother whom the people could see, hear and worship. A human as god/king was the inevitable consequence of the pagan view of the world, but it was one that would have dire consequences for the early Christians.

There was a public choice for Christians after c.64 BC in Nero’s time: A Christian could publicly worship the Emperor of Rome as god OR the Christian who worshipped the True God could refuse to do that and  be tortured and killed in many diabolic ways.

Tens and thousands of Christians gave their lives for Christ rather than worship the Roman Emperor and were martyred for Him.

Persecution under Maximinus the Thracian (235-238)

Many Christians over the centuries cracked under the pressures of torture or fear of torture and death.

These people performed the sacrifice to the Emperor or gods and were let go. After a particular persecution was over, most of them wanted to be back in fellowship with the Christian body. This produced a dilemma in the Early Church: should we allow them back after they had denied Christ and sacrificed to the Emperor and to pagan gods or should we exclude them permanently from the Church? 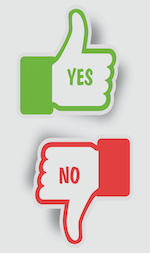 Those who avoided martyrdom and other forms of torture by publicly renouncing their faith in Christ were called lapsi meaning “to fall away.” They had lapsed from the faith. The believers broke into two camps. There were those who believed that once you publicly renounced faith in Christ and performed the sacrifice, you were a lapsi and you had removed yourself permanently from Christian fellowship. The other faction believed that because Jesus had forgiven Peter and forgives all repentant sinners, the lapsi should be readmitted to the Church after a period of penance.

Because there had been repeated persecutions over the centuries, this issue was hotly debated at the end of every persecution. One side argued that if a particular lapsi had watched her mother, father, husband and sister die, she who had “chickened out” was a traditor, a “traitor” and should definitely not be allowed back into the Church. The other side argued that her spirit was willing, but her flesh was weak just like Jesus had said in Matthew 26:41. Jesus would forgive her just like He forgave Peter who had publicly denied Him three times on the night before His death.

One can imagine the heat this problem generated. So many had family and friends tortured and killed. Most had chosen to die rather than to betray their Lord. Just because the persecution was over for a while, why should these lapsi be admitted back into the Church? What kind of faith did they have that could so easily be broken? Could we ever trust them under torture not to betray us to the authorities?

The other side conceded the questions but pleaded for forgiveness. Jesus had forgiven Peter who betrayed Him just several hours after that Apostle had declared to Jesus, “Even if all fall away (lapsi), I will not…. Even if I have to die with you, I will never disown you!” (Mark 14:29, 31)  Jesus not only forgave Peter, but later commissioned him to do great things. Jesus died to forgive sinners. That was the reason He came to earth. Who are we, they argued, to deny the repentance of the lapsi if our Lord would not? The problem of the lapsi had been argued for a long time. The two sides became so contentious in the early 4th century they caused public rioting in Rome. The leaders of the two factions were sent into exile by Emperor Maxentius (306-312).

Clearly those who faltered in their faith and courage at such crucial times were not only dispiriting to other Christians but also caused concern among the clergy for the salvation of those who had “fallen away,” who had lapsed from the faith. None of the Christians who knew Christ died on the Cross, died for them, for sinners could imagine how a Christian could deny Him.

The early churches eventually came down on the side of the forgivers. The church in Rome wrote to the church in Carthage that if the lapsi were left to their own resources, their fall would be irreparable and they would be lost. The bishop encouraged them to extend their hands to the fallen that they may rise again. Dionysius, a contemporary of Origen, argued that before their martyrdom by Decius in 249-251, even some martyrs had accepted lapsi back into their fellowship. Who were they after the persecution was over to “grieve mercy and overturn order?” The chalice of mercy was ever full during the centuries of Christian persecution.

The hard-liners had made some good points philosophically and practically, but the wise men of the Early Church followed the Gospel of Forgiveness and Jesus’ injunction in Matthew 18:21,22: “Then Peter came to Jesus and asked, ‘Lord, how many times shall I forgive my brother when he sins against me? Up to seven times?’ Jesus answered, ‘I tell you, not seven times, but seventy times seven.’” It is interesting to note in this passage that Peter the three-time Denier of Christ was the one who asked the question about forgiveness that Jesus answered with the doctrine of Infinite Forgiveness.—Sandra Sweeny Silver