“And the Lydians themselves say that the games which are now in use among them and among the Greeks were also their invention…there came to be a grievous dearth over the whole of Lydia (in modern Turkey); and the Lydians for a time continued to endure it, but afterwards, as it did not cease, they sought for remedies….and then were discovered, they say, the ways of playing with the dice and the knucklebones and the ball and all the other games excepting draughts. These games they invented as a resource against the famine and this they used to do: on one of the days they would play games all the time in order that they might not feel the want of food, and on the next day they ceased from their games and had food…this went on for eighteen years.” Herodotus, Histories 1:94 (425 BC)

According to the Father of History Herodotus, the Lydians claimed to have invented dice games, but that is not true. We have found dice in Egypt going way back to c. 3000 BC, almost 2,000 years before the Iron Age Lydians. 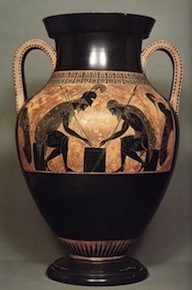 It will never be known who first carved from bone or wood the first die or dice (plural) and proceeded to engage his friends in craps, from the French word “crapaud” meaning “toad” after  the way of playing the game crouched and poised on the floor or sidewalk like toads. There is an exquisite c. 540 BC terra cotta vase from the Vatican Museum showing Ajax and Achilles, heroes of the Trojan War (c. 1200 BC), in full armor playing dice on a game board. 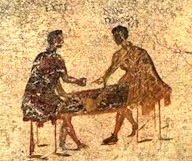 The ancient Romans had two games played with dice: Tali and Tesserae. Tali used four dice and the best score was when each die showed a different number. Tesserae was played with three dice and the best score was three sixes. Bad scores were called “dogs” and the high scores were called “Venus” after their goddess of love. They threw from a cup called a fritillium and usually played on a board made of wood, bronze or marble. The wealthy had marble boards encrusted with jewels and had their names incised into the back of the boards.

Dice, of course, led to gambling. The ruin of so many Romans through gambling losses caused the authorities to enact numerous laws (e.g. Lex Titia) forbidding the game of dice. But the laws were ignored and “shooting craps” continues to be one of the  most popular games 2,000 years later.—Sandra Sweeny Silver