It is likely, but can’t be proved textually, that Romans and others in the Western World were aware of the existence of the Chinese for many centuries, if not thousands of years before China first appears in ancient texts. There have always been traders and nomads who found new tribes, new mini-empires and told about them, but their discoveries were never written down. One of the first mentions of China comes from the Greek historian Strabo (c. 64 BC) quoting a Greek historian from his past, Apollodorus of Athens: “Apollodorus says that Bactria (in northern Afghanistan) is the ornament of Ariana (Afghanistan) as a whole; and, more than that, the Bactrians extended their empire even as far as the Seres (China).” Geographica 11.11.1 That small tease from c. 220 BC is the first known mention of contact with the “Seres” (Greek meaning “the people of the land of silk”) in Western history.

The Greco-Roman world called China “Seres,” from the Chinese word “si” meaning “silk.” The Chinese had been known for their wondrous silk cloth through centuries of trading on the Silk Road. [CLICK HERE to read article about The Silk Road.]

During the time of Augustus, the first Caesar (reigned 27 BC to 14 AD), the Roman historian Florus described the many envoys from around the world who flocked to Rome to render homage to Augustus: “Even the rest of the nations of the world which were not subject to the imperial sway were sensible of its grandeur and looked with reverence to the Roman people, the great conqueror of nations. Thus even Scythians and Sarmatians sent envoys to seek the friendship of Rome. Nay, the Seres came likewise, and the Indians who dwelt beneath the vertical sun, bringing presents of precious stones and pearls and elephants, but thinking all of less moment than the vastness of the journey which they had undertaken, and which they said had occupied four years. In truth it needed but to look at their complexion to see that they were people of another world than ours.” Epitome of Histories of Titus Livy

This c. 20 AD Roman map called Orbis Terrarum (left) was familiar enough with China to  place it on a map showing Roma and Italia at the bottom of the world and on the other side of the world, on top, is Seres, China. Interestingly, this map depicts a round world, not a flat one. Ptolemy’s 150 AD map (below) correctly positions “Serica” in the extreme east next to an ocean. Ptolemy did a pretty good job of pinpointing his knowledge of the then-known world. 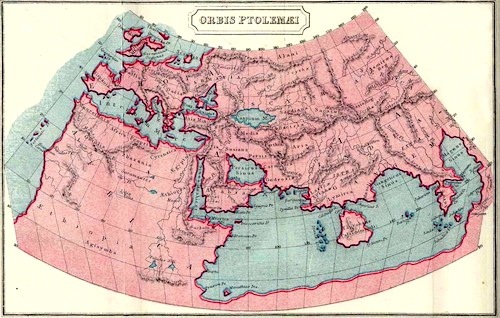 The modern map below, drawn and designated after 2,000 years of historical perspective, shows the map of the Eastern Hemisphere in 100 AD. 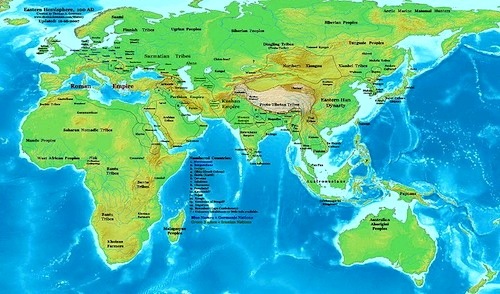 Pliny the Elder (23-79 AD), always the precise naturalist, in Natural History, 6. 24 describes what he has learned about the Seres: “It is not, however, before we have traversed very nearly one half of the coast that looks towards the north-east, that we find it occupied by inhabitants. The first people that are known of here are the Seres (Chinese) so famous for the wool that is found in their forests (silk from the silk worm) and the nation of the Attacori (in northern India)…. in the interior, the Casiri, a people of India…who feed on human flesh.” Pliny describes, inaccurately, how the famous “Seres wool” was made:” “The Seres are famous for the woolen substance obtained from their forests; after a soaking in water they comb off the white down of the leaves… So manifold is the labour employed, and so distant is the region of the globe drawn upon, to enable the Roman maiden to flaunt transparent clothing in public.”

The only thing Pliny got right was the “soaking in water” part. For over 1,000 years Chinese hid from the world “the secret of silk.” By the first century AD, silk was the cloth of choice for Roman upper class women. Pliny remarked on the “transparent clothing” worn by “Roman maidens” as does Seneca the Younger: “I can see clothes of silk, if materials that do not hide the body, nor even one’s decency, can be called clothes…Wretched flocks of maids labor so that the adulteress may be visible through her thin dress, so that her husband has no more acquaintance than any outsider or foreigner with his wife’s body.” Declamations Volume 1  [CLICK HERE to see article about the first time Romans saw silk: The Banners of Carrhae.]

What did the ancient Chinese know about the Romans and the Western Hemisphere? From earliest times they called the West “Da Qin” (the “Great Qin,” pronounced “Chin” after its greatest ruler Qin, who reined 221-210 BC.) We call China “China” after Qin.  Qin is the emperor    who created the famous Terra Cotta Army discovered by farmers in the Lintong District of China in 1974 (below). The meaning of “Da Quin” was not Rome but was later pinpointed as Syria. Why? Syria and especially Antioch was the cradle of Christian evangelism and many of the early believers like the Apostle Thomas. Doubting Thomas went all the way to India and was killed while preaching the Gospel. The early believers travelled the known and unknown world to spread the word of Jesus of Nazareth’s resurrection.

There are indications very early missionaries went to China. That is not a subject of this article, but it is an explanation of why the AD word for the West, Da Qin, was associated with Syria rather than with Rome.

The Sihai Huayi Zongtu in the Harvard Library (below) is the map of the world used by the Chinese all the way into the 1500’s AD. Da Qin, the West, is on the left side of the world on one sea and China on the right side on another sea.

The Romans knew a little textually about the Chinese, but, textually, what did the Chinese know about the West in the early centuries AD? A Chinese chronicler by the name of Fan Ye compiled in 445 AD the official history of the Han dynasty (206 BC to 220 AD) founded by Liu Bang. He goes into great lengths describing Da Qin’s (the Roman’s) kingdom. The following is from Fan Ye’s Hou Han Shu (Book of Later Han) chronicle—Section 11: The Kingdom of Da Qin:

“The Kingdom of Da Qin has more than four hundred walled towns. There are several tens of smaller dependent kingdoms. The walls of the towns are made of stone. They have established postal relays at intervals, which are all plastered and whitewashed. There are pines and cypresses, as well as trees and plants of all kinds. The common people are farmers. They cultivate many grain crops and silkworm-mulberry trees. They shave their heads, and their clothes are embroidered. They have screened coaches (for the women) and small white-roofed one-horse carts. When carriages come and go, drums are beaten and flags and standards are raised. The seat of government (Rome) is more than a hundred li (c. 26 miles) around. In this city are five palaces each ten li (c. 2.6 miles) from the other. Moreover, in the rooms of the palace the pillars and the tableware are really made of crystal. The king goes each day to one of the palaces to deal with business. After five days, he has visited all of them….

bright moon pearls, fighting cocks, rhinoceroses, coral, yellow amber, opaque glass, whitish chalcedony, red cinnabar, green gemstones, drawn gold-threaded and multi-colored embroideries, woven gold-threaded net, delicate polychrome silks painted with gold, and asbestos cloth. They also have a fine cloth which some people say is made from the down of ‘water sheep,’ but which is made, in fact, from the cocoons of wild silkworms. (As the West was befuddled by silk. The East was befuddled by linen/wool! The tribes of northern Europe “invented” wool and linen made from flax has been discovered in Europe dating  back to 9,000 BC). The Da Qin blend all sorts of fragrances, and by boiling the juice, make storax (a fragrant balsam used in making perfume). They have all the precious and rare things that come from the various foreign kingdoms. 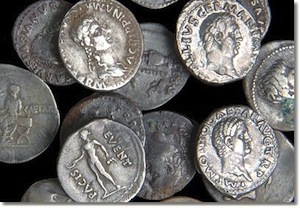 They make gold and silver coins. Ten silver coins are worth one gold coin. They trade with Anxi (Parthia) and Tianzhu (Northwestern India) by sea. The profit margin is ten to one….

In the ninth yanxi year (166 CE), during the reign of Emperor Huan (132-168 AD), the king of Da Qin (the Roman Emperor) Andun (Marcus Aurelius Antoninus—reigned 161-180), sent envoys from beyond the frontiers through Rinan (a Commandery on the central Vietnamese coast), to offer elephant tusks, rhinoceros horn, and turtle shell. This was the very first time there was communication (between the two countries)….The population there is dense. Each ten li (2.6 miles) there is a postal stage, and each thirty li (7.7 miles) a postal station. Finally, there is no trouble with bandits, but there are many ferocious tigers and lions on the road that obstruct and kill travelers. If the caravans don’t have more than a hundred men carrying arms, they will be devoured….

Also, it is said that there is a raised bridge, several hundred li long (c. 1,364 feet), which crosses over to Haibei (‘North of the Sea’). They (the vassal   kingdoms of Da Qin) produce curious gems and so many other peculiar and bizarre things that I will not record what is reported.”

So the East was half-right and half-wrong about the West of its time as was the West confused about the East. In the 21st century, 2,000 years after the West and the East began a tentative relationship, Xi Jinping (General Secretary of the Communist Party of China) wrote an open letter to the press: