Hegesippus, (c. 110 AD—180 AD), a 2nd-century Christian chronicler of early church history, mentions the two grandsons of Jude, a half-brother of Jesus, who lived in Rome during the reign of Emperor Domitian (81—96). The names of the two grandsons of Jude were supposedly Zoker and James, according to notes in the the Bodleian Library, one of the oldest libraries in Europe. (University of Oxford. Oxford, UK)

Regrettably, none of Hegesippus’ works survive. But the Bishop of Caesarea Eusebius (263—339) in gathering information for his indispensable Church History had access to Hegesippus and other early Christian writers who have been lost. He copies from Hegesippus’ manuscripts this story of Jude’s grandsons, the grand-nephews of Jesus:

“But when this same Domitian had commanded that the descendants of David should be slain, an ancient tradition says that some of the heretics brought accusation against the descendants of Jude, said to have been a brother of the Saviour according to the flesh, on the ground that they were of the lineage of David and were related to Christ Himself.

Hegesipus relates these facts in the following words:

‘Of the family of the Lord there were still living (in 81 to 96) the grandchildren of Jude, who is said to have been the Lord’s brother according to the flesh. Information was given that they belonged to the family of David, and they were brought to the Emperor Domitian by the Evocatus (an equestrian soldier). For Domitian feared the coming of Christ as Herod also had feared it.

And he asked them if they were descendants of David, and they confessed that they were. Then he asked them how much property they had, or how much money they owned. And both of them answered that they had only nine thousand denarii half of which belonged to each of them; and this property did not consist of silver, but of a piece of land which contained only thirty-nine plethora, and from which they raised their taxes and supported themselves by their own labor.

Then they showed their hands, exhibiting the hardness of their bodies and the callousness produced upon their hands by continuous toil as evidence of their own labor. 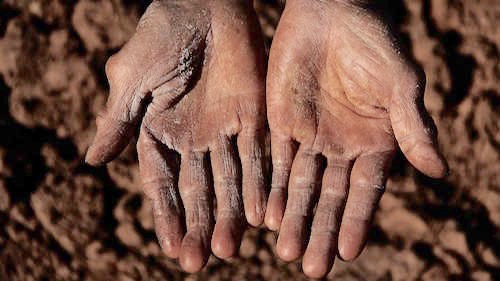 And when they were asked concerning Christ and his kingdom, of what sort it was and where and when it was to appear, they answered that it was not a temporal nor an earthly kingdom, but a heavenly and angelic one, which would appear at the end of the world, when he should come in glory to judge the quick and the dead, and to give unto every one according to his works. Upon hearing this, Domitian did not pass judgment against them but despising them as of no account, he let them go, and by a decree put a stop to the persecution of the Church.

But when they were released they ruled the churches because they were witnesses (for Jesus) and were also relatives of the Lord. And peace being established, they lived until the time of Trajan (from 98 to 117 AD). “These things are related by Hegesippus” in Eusebius, Church History, Book III, ch. 19–20

“For Domitian feared the coming of Christ as Herod also had feared it.…And when they (Jude’s grandsons) were asked concerning Christ and his kingdom, of what sort it was and where and when it was to appear, they answered that it was not a temporal nor an earthly kingdom, but a heavenly and angelic one, which would appear at the end of the world, when he should come in glory to judge the quick and the dead, and to give unto every one according to his works. Upon hearing this, Domitian did not pass judgment against them but despising them as of no account, he let them go, and by a decree put a stop to the persecution of the Church.” Eusebius Church History 3.19,20

Notice that the Emperor Domitian “feared the coming of (the King) Christ” as Herod had “feared” the coming of the Jewish Messiah/King. It is interesting to observe the outcome in history of Domitian’s meeting with those rather humble grandsons of Jude. Domitian first of all stopped the persecution and killing of Christians. He brought back John the Apostle from the Isle of Patmos and allowed him to live in Ephesus. 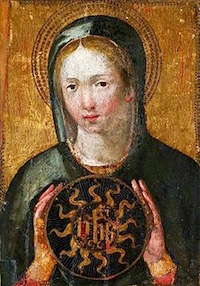 Domitian’s niece, Flavia Domitilla (left), had become a Christian. Domitian exiled her to the island of Pontia. He, also, brought her back to Rome after meeting with Jude’s two grandsons. But she was, apparently, martyred after Domitian died. Many members of the Roman upper glass had by Domitian’s time in the 90’s become Christians. Paul in his letter to the Philippians 4:22 in the year c. 62 wrote to the church in Phillippi: “All God’s people here (in Rome) send you greetings, especially those who belong to Caesar’s household.”

Eusebius also relates in his Church History Book 3.32 that after the testimony before Domitian, the grandsons of Jude had a high standing in the incipient Early Church and maybe suffered martyrdom under the Emperor Trajan (reigned 98 to 117 AD):

Eusebius writes: “The same historian (Hegesippus) says that there were also others, descended from one of the so-called brothers of the Saviour, whose name was Judas, who, after they had borne testimony before Domitian, as has been already recorded, in behalf of faith in Christ, lived until the same reign.”

Hegesippus is quoted as follows in Eusebius’ book:

“They (Jude’s grandsons) came (after their appearance before the Emperor), therefore, and took the lead of every church as witnesses and as relatives of the Lord. And profound peace being established in every church, they remained until the reign of the Emperor Trajan (reigned 98 to 117 AD), and until the above-mentioned Symeon (the cousin of Jesus who replaced Jesus’ half-brother James as head of Jerusalem Church when James was killed in c. 62 AD), son of Clopas (aka Cleopas Luke 24:18 & John 19:25), an uncle of the Lord, was informed against by the heretics, and was himself in like manner accused for the same cause before the governor Atticus.

And after being tortured for many days he (Symeon) suffered martyrdom, and all, including even the proconsul, marveled that, at the age of one hundred and twenty years, he could endure so much. And orders were given that he should be crucified.”

Eusebius continues: “In addition to these things the same man (Hegesippus), while recounting the events of that period, records that the Church up to that time had remained a pure and uncorrupted virgin, since, if there were any that attempted to corrupt the sound norm of the preaching of salvation, they lay until then concealed in obscure darkness.

But when the sacred college of apostles had suffered death in various forms, and the generation of those that had been deemed worthy to hear the inspired wisdom with their own ears had passed away (early 100’s), then the league of godless error took its rise as a result of the folly of heretical teachers, who, because none of the apostles was still living, attempted henceforth, with a bold face, to proclaim, in opposition to the preaching of the truth, the knowledge (Gnosticism) which is falsely so-called.”

In the decades following Jesus’ Resurrection, there were many relatives of Jesus and His family who were leaders in the Churches in their various localities because they were “related” to Jesus and His family. The Desposyni from the Greek word desposunos meaning “of or belonging to the master or lord” was, at that time, a name reserved for Jesus’ blood relatives.

But Jude’s grandsons neither sought fame nor wanted their Jesus/David heritage to be known. But they were ferreted out by the Emperor and did not pretend to be anything but what they were, humble workers of the soil. They gave a true witness of Christ’s Kingdom to a Roman Emperor who freed them, released the Apostle John from Patmos, brought back his own niece from exile and stopped the persecution and killing of their brothers and sisters in Christ. Temporarily.—Sandra Sweeny Silver