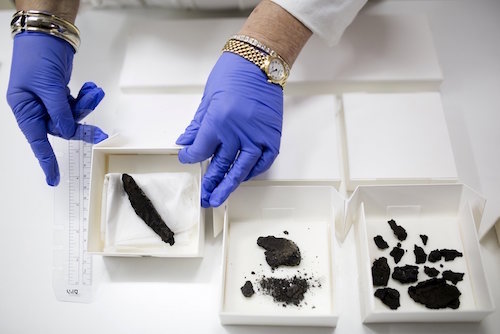 What 3” treasure do you think this woman is showing us? Is it a strange/rare piece of jewelry in that box? Why IS that little black thing so precious that she must have plastic gloves on in order to show it to us?

That little black cylinder is a fragment from a charred Hebrew Bible scroll found by Israeli archeologists in 1970 inside the burned ruins of a 2,000 year-old synagogue in Ein (aka En) Gedi on the western shore of the Dead Sea. 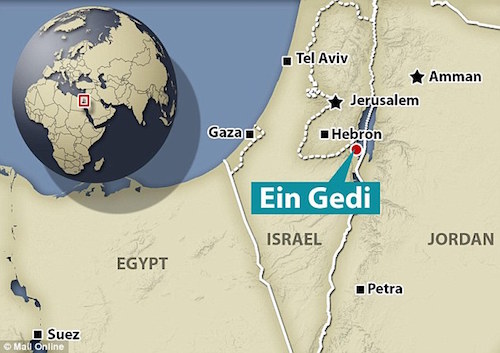 They knew it was a Biblical scroll of some sort because it was found inside the Holy Ark of the synagogue where the Torah was placed. This was the first time in the history of archeological excavation that a Torah scroll had been found inside the Ark. 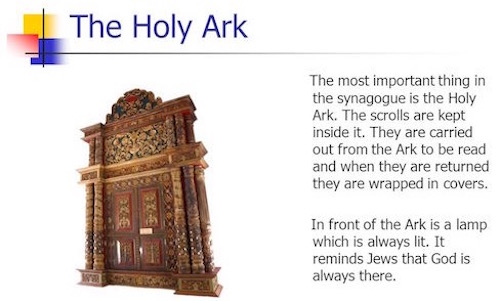 For almost 50 years the burned cylinder has remained untouched because it is so fragile it could disintegrate. WHAT WRITING was INSIDE that charred scroll, they wondered. Probably no one will ever know, they speculated, because we cannot unroll it.

Until…the mid-1980’s when early prototypes of 3D Scanning machines came on the scene.

A modern 3D scanner analyzes objects to collect data which can be used to construct digital three-dimensional models. The scanner had been used on unintelligible fragments of the Dead Sea Scrolls with some success. Dr. W. Brent Seales, Chair of Computer Science at the University of Kentucky, had developed digital imaging software to read the Dead Sea Scrolls, so the charred Ein-Gedi Scroll was sent to him.

The rest is history, as they say. Seales took the scan of the burned lump that had been scanned by a commercially available X-ray based, micro-computed tomography machine and sent to him by Dr. Shor, curator and director of the IAA’s Dead Sea Scrolls Project. Seales used his “volume cartography” technique and the results were amazing. “Much of the text is now as readable as that of unharmed Dead Sea Scrolls….the Ein Gedi Leviticus Scroll is the most extensive and significant Biblical text from antiquity that has come to light” said Michael Seagal of Hebrew University in Jerusalem who helped analyze the text.

This is how the composite image of the carbonized scroll (which could not be manually opened) looks when it is VIRTUALLY OPENED/UNWRAPPED. Notice the actual never-to-be-manually-opened black scroll on the extreme right of the “unwrapped virtual” picture.

So what was WRITTEN INSIDE the En-Gedi scroll?—Leviticus 1:1-8

“The LORD summoned Moses and spoke to him from the tent of meeting, saying: Speak to the people of Israel and say to them: When any of you bring an offering of livestock to the LORD, you shall bring your offering from the herd or from the flock. If the offering is a burnt-offering from the herd, you shall offer a male without blemish; you shall bring it to the entrance of the tent of meeting, for acceptance in your behalf before the LORD. You shall lay your hand on the head of the burnt-offering, and it shall be acceptable in your behalf as atonement for you. The bull shall be slaughtered before the LORD; and Aaron’s sons the priests shall offer the blood, dashing the blood against all sides of the altar that is at the entrance of the tent of meeting. The burnt-offering shall be flayed and cut up into its parts. The sons of the priest Aaron shall put fire on the altar and arrange wood on the fire. Aaron’s sons the priests shall arrange the parts, with the head and the suet, on the wood that is on the fire on the altar.” Leviticus 1:1-8

This writer cannot help but comment on the many mentions of “fire” in the Biblical text that was inside this fire-burned cylinder: “the burnt offering,” “fire on the altar,” “in the wood that is on the fire on the altar.” Maybe I should have named this article “The Burnt Offering?” For it is a burnt offering of sort to the hand of God upon Bible texts over the millennia. This c. 2,000 year-old text from Leviticus corresponds almost word for word to the very many English translations of the Old Testament over the last 500 years or more. This writer has done several articles on ancient technology and ingenuity that astound, astonish and baffle our modern world. Click below for two of these.

The Lycurgus Cup—Nanotechnology in Ancient Rome

As stunning and staggering as ancient technology was, it could NEVER have opened a tiny burned-to-a-crisp fragment found in the Ark of a burned-down synagogue. For us in the beginning of the 21st century computer technology and software are king. Who knows what other offerings await us, however? 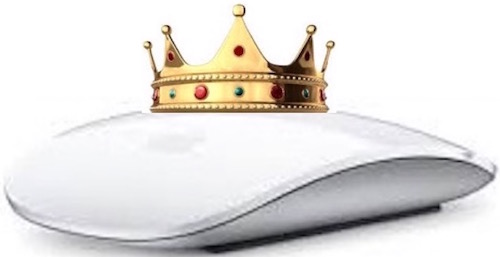 Ein Gedi, the small town where the scroll was found, is made up of two Hebrew words: ein meaning “spring of water” and gedi meaning “goat-kid” from the presence of many goats in the oasis. Spring water bubbles up from far beneath the earth and presents itself here and there for our delectation and refreshment. This tiny piece of charcoal-like material could have been overlooked when it bubbled to the surface in the burned-to-the-ground city of Ein Gedi had it not been for the perspicacious archeologists who preserved it, the scientists who cared for it and the computer scientists who opened it up digitally and presented its sacred contents to an awed world.—Article by Sandra Sweeny Silver