It’s a Saturday, the Jewish Sabbath Day, in a field somewhere “in the towns of Galilee” according to the last reference to where Jesus was going. (Matthew 11:1). Because He had been teaching and performing miracles in the nearby towns, local Pharisees who were opposed to Jesus are in His group with the intent of finding some flaws in His teachings.

It’s early morning and Jesus and His apostles had apparently not eaten breakfast because His disciples were hungry and began to pluck by rubbing the shafts together in their hands some heads of grain (probably wheat in June) and eat them. When the Pharisees saw this, they said to him. ‘Look! Your disciples are doing what is unlawful on the Sabbath.’” (12:1-8) 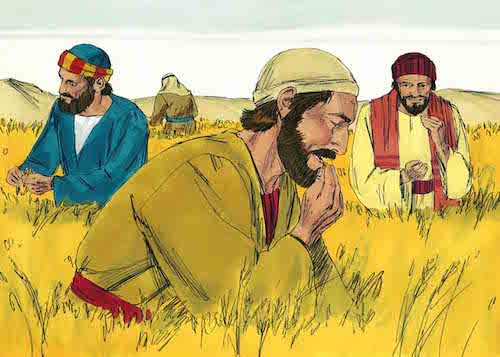 Jesus gives them Old Testament references to King David and priests who violated the Sabbath and ends with “The Son of man is Lord of the Sabbath.” (Matthew 12:7) He continues walking and enters “their synagogue” where there is a man “with a withered hand…..Looking for a reason to accuse Jesus, they asked him, ‘Is it lawful to heal on the Sabbath?’” Jesus tells them if one of their sheep fall into pit on the Sabbath, they, of course, would pull it out and ends with “Therefore it is lawful to do good on the Sabbath” and immediately “heals the withered hand. But “the Pharisees…plotted how to kill Jesus. Aware of this, Jesus withdrew from that place.”(12:13-15) 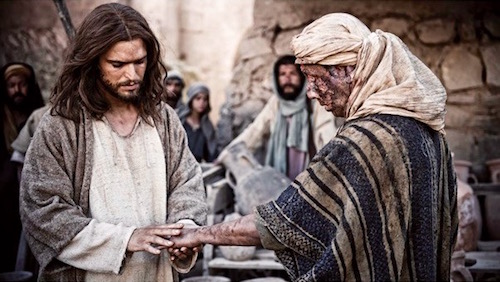 People heard of His miracle in the synagogue and “brought Him a demon-possessed man who was blind and mute and Jesus healed him. All the people were astonished and said, ‘Could this be the Son of David?’ But when the Pharisees heard this, they said, ‘It is only by Beelzebub, the prince of demons, that this fellow drives out demons.’ Jesus knew their thoughts and said to them, ‘Every kingdom divided against itself will be ruined, and every city or household divided against itself will not stand. If Satan drives out Satan, he is divided against himself. How then can his kingdom stand?….But if it is by the Spirit of God that I drive out demons, then the kingdom of God has come upon you.’”(Matthew 12:22-28) 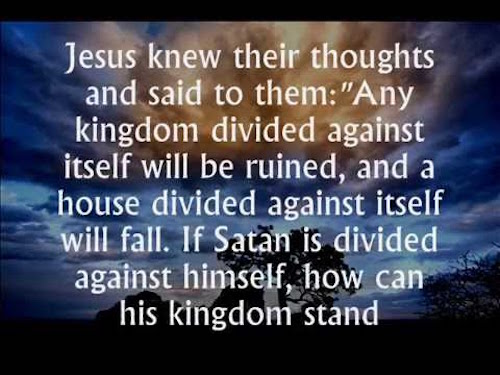 The people see this miracle and wonder if Jesus is the predicted Messiah, the son of David. But the Pharisees say He drives out demons because He is aligned with Satan, Beelzebub. The Pharisees and teachers of the law tell Jesus they want to see a miracle in spite of the fact they had that day seen two miracles. “He answered, ‘A wicked and adulterous generation asks for a sign! But none will be given it except the sign of the prophet Jonah. For as Jonah was three days and three nights in the belly of a huge fish, so the Son of Man will be three days and three nights in the heart of the earth.” (12:39,40) Here Jesus predicts His Resurrection as the greatest miracle of all. As, indeed, it is. 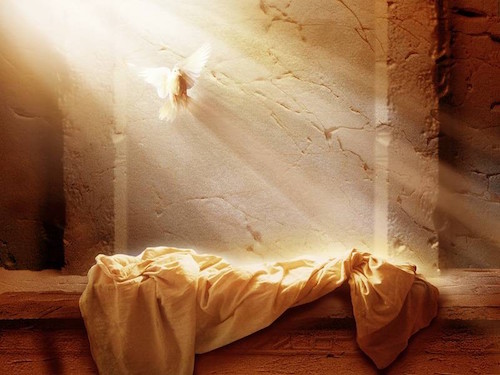 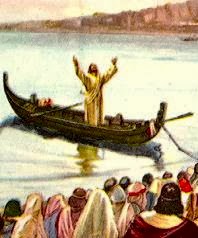 “That same day Jesus went out of the house and sat by the lake. Such large crowds gathered around him that he got into a boat and sat in it, while all the people stood on the shore. Then he told them many things in parables” ( Matthew 13:1-3) As the Old Testament predicted of the Messiah: “I will open my mouth in a parable; I will utter dark sayings of old.” Psalm 78:2

Jesus and His disciples had, obviously, found a home because Jesus “went out of the house” and they were now near enough to the Sea of Galilee that He hoped to find some peace and quiet by the lake. But it was not to be. If one searches the four biographies of Jesus, He was rarely alone. He was a very popular miracle-worker and teacher in His time and people flocked to Him as they flock to very popular people today if they are in public.

Jesus knew they could not see Him if He stood on the shore and taught them, so He got into a boat, rowed a way out, sat down and taught them some parables. A parable is “a simple story used to illustrate a moral or spiritual lesson.” He taught them the Parable of the Sower, of Weeds and of the Mustard Seed and Yeast. When He is finished, he goes back into the house and explains to His disciples the meaning of the Weeds Parable. Then He teaches them two other parables: Of the Hidden Treasure and Pearls and Of the Net. “When Jesus had finished these parables (to his disciples), he moved on from there.” (Matthew 13:53)

From daylight before breakfast until twilight of that night, Jesus had been on-the-go. He and His disciples often traveled toward evening and at night because the crowds of people who constantly surrounded Him were in their homes eating dinner and then sleeping and they could, unimpeded by the throngs, travel to where they were going.—Sandra Sweeny Silver 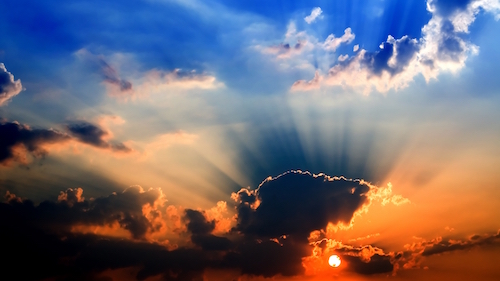 CLICK HERE for another jam-packed day in the life of Jesus.