The dictionary definition of the word “prostitute” is: “A person, in particular a woman, who engages in sexual activity for payment.” The word comes from the Latin prostitutus, past participle of prostituere “to expose publicly.”

According to the Bible, the earliest professions were: shepherding and farming. Adam and Eve were both created by God and were in an Edenic world. They did not work or toil. But they did transgress God’s only commandment to them and now we are all Fallen. (Genesis 3) Eve gave human birth to two of Adam’s children—Cain and Abel,

“And Adam had relations with his wife Eve, and she conceived and gave birth to Cain. “With the help of the LORD I have brought forth a man,” she said. Later she gave birth to Cain’s brother Abel. Now Abel was a keeper of sheep and Cain was a tiller of soil.” Genesis 4:1,2

The first mention of prostitution in the Bible is the fascinating story of Judah and his daughter-in-law Tamar. (Genesis 38) Two of Judah’s sons had died after they married Tamar. Judah did not want to give his remaining son Shelah to her so he let her live as a widow in his home. Tamar did not like that and “hell has no fury like a woman scorned.” (English poet William Congreve in his play The Mourning Bride, 1697: “Heav’n has no Rage, like Love to Hatred turn’d, Nor Hell a Fury, like a Woman scorn’d.”)

Judah took a trip and Tamar veiled herself as a roadside “shrine prostitute.” Judah wanted to have sex with her. She demanded, in addition to a goat, this: “Your seal and its cord, and the staff in your hand.” He gave them to her, had sex with her and went his way.

When Judah sent the goat by his friend, he asked:

“Where is the shrine prostitute who was beside the road at Enaim?”

“There hasn’t been any shrine prostitute here,” they said.

So he went back to Judah and said, “I didn’t find her. Besides, the men who lived there said, ‘There hasn’t been any shrine prostitute here.’”

Then Judah said, “Let her keep what she has, or we will become a laughingstock. After all, I did send her this young goat, but you didn’t find her.”

About three months later Judah was told, “Your daughter-in-law Tamar is guilty of prostitution, and as a result she is now pregnant.”

Judah said, “Bring her out and have her burned to death!”

As she was being brought out, she sent a message to her father-in-law. “I am pregnant by the man who owns these,” she said. And she added, “See if you recognize whose seal and cord and staff these are.”

Judah recognized them and said, “She is more righteous than I, since I wouldn’t give her to my son Shelah.” And he did not sleep with her again.” Genesis 38:21-26

The “Father of History” Herodotus (c.484–c.425 BC) was a Greek historian. He is known for his historical inquiries into people/events/mores in a systematic way. In his book The Histories (Greek ἱστορία history—meaning “inquiry”) he relates the following information about ancient temple prostitutes:

”The foulest Babylonian custom is that which compels every woman of the land to sit in the temple of Aphrodite and have intercourse with some stranger once in her life. Many women who are rich and proud and disdain to mingle with the rest, drive to the temple in covered carriages drawn by teams, and stand there with a great retinue of attendants.

But most sit down in the sacred plot of Aphrodite, with crowns of cord on their heads; there is a great multitude of women coming and going; passages marked by line run every way through the crowd, by which the men pass and make their choice. Once a woman has taken her place there, she does not go away to her home before some stranger has cast money into her lap, and had intercourse with her outside the temple; but while he casts the money, he must say, “I invite you in the name of Mylitta” (that is the Assyrian name for Aphrodite). It does not matter what sum the money is; the woman will never refuse, for that would be a sin, the money being by this act made sacred. So she follows the first man who casts it and rejects no one. After their intercourse, having discharged her sacred duty to the goddess, she goes away to her home; and thereafter there is no bribe however great that will get her. So then the women that are fair and tall are soon free to depart, but the uncomely have long to wait because they cannot fulfill the law; for some of them remain for three years or four. There is a custom like this in some parts of Cyprus.” Herodotus Histories 1.199

In Greek mythology the first to prostitute their bodies were a group of women from the island of Cyprus. The were called the “propoetides.” They refused to believe in or worship Aphrodite, the goddess of love. She punished them by taking from them all sense of shame. They could not blush and the blood hardened in their cheeks. When men came to have sex with them, the women turned the men into human sacrifices. Finally, Aphrodite turned the women into stones. Seems like the myth is a morality lesson: men are killed by their lust. Women who cater to lust like prostitutes become “stone-cold.”

In the ancient world there were male as well as female prostitutes. During King Rehoboam’s Reign in Judah (c. 931 – 913 BC):

“Judah did evil in the eyes of the Lord. By the sins they committed they stirred up His jealous anger more than those who were before them had done. They also set up for themselves high places, sacred stones and Asherah poles on every high hill and under every spreading tree. There were even male shrine prostitutes in the land; the people engaged in all the detestable practices of the nations the Lord had driven out before the Israelites.” I Kings 14:22–24

The ancient city of Corinth was one of the most wicked in the ancient world. Strabo (c. 63 BC-c.24 AD), describing Corinth in St. Paul’s day (c. 50 AD), said it was a wealthy port city not only because of its fortunate location on the isthmus connecting Asia and Italy but:

“…(its) temple of Aphrodite (goddess of love) was so rich that it owned more than 1,000 temple slaves, courtesans, whom both men and women had dedicated to the goddess. And therefore it was also on account of these women (temple prostitutes) that the city was crowded with people and grew rich; for instance, the ship captains freely squandered their money (in the temple brothels) and hence the common proverb: ‘Not for every man is the voyage to Corinth.’” Geography 8.6.20

So notorious for its licentiousness was Corinth that one of the Greek words for “fornication” was korinthiazomai. Paul labored in Corinth for a year and a half trying rather unsuccessfully to stabilize the new church. (Acts 18:11) Pastor Paul passionately pleaded his case and ministry to the Corinthians with words that would not only show his love and vulnerability to them but would sum up his entire ministry:

“We put no stumbling block in anyone’s path, so that our ministry will not be discredited. Rather, as servants of God we commend ourselves in every way: in great endurance; in troubles, hardships and distresses; in beatings, imprisonments and riots; in hard work, sleepless nights and hunger; in purity, understanding, patience and kindness; in the Holy Spirit and in sincere love; in truthful speech and in the power of God; with weapons of righteousness in the right hand and in the left; through glory and dishonor, bad report and good report; genuine, yet regarded as impostors; known, yet regarded as unknown; dying, and yet we live on; beaten and yet not killed; sorrowful, yet always rejoicing; poor, yet making many rich; having nothing, and yet possessing everything. We have spoken freely to you, Corinthians, and opened wide our hearts to you. We are not withholding our affection from you, but you are withholding yours from us. As a fair exchange—I speak as to my children—open wide your hearts also.” II Corinthians 3-13 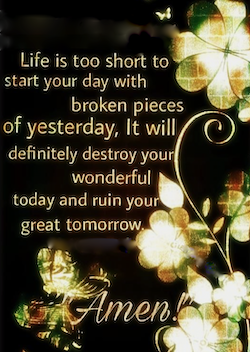 God’s love and forgiveness reached many of them. It always will. Some of the believers in that iniquitous city came out of lifestyles and habits that were hard to break. They were constantly backsliding and required constant upbraiding:

“Do you not know that the wicked will not inherit the kingdom of God? Do not be deceived: Neither the sexually immoral nor idolaters nor adulterers nor male prostitutes nor homosexual offenders nor thieves nor the greedy nor drunkards nor slanderers nor swindlers will inherit the kingdom of God. And that is what some of you were.” (I Corinthians 6:9, 10) “Were” is the past tense.—Sandra Sweeny Silver