“Tarsicius” as a first name is derived from the city of Tarsus in the ancient region of Cilicia where Paul the Apostle to the Gentiles was born. The boy’s first name means “of/from Tarsus.” We must imagine Tarsicius (263—275) was either born in Tarsus or his parents came from Tarsus and were living in Rome during the time of their teenage son’s murder. Parents and son were definitely Christians and Tarsicius had been raised in the “nurture and admonition of the Lord.”

In the ancient world, Tarsus was a famous city in the late BC’s and early AD’s because three important people had made it famous. Mark Anthony first met Cleopatra in Tarsus in 41 BC and was enchanted by her. His friend Julius Caesar (age 48) had met Cleopatra (age 22) in 48 BC. That meeting in Tarsus between Antony and Cleopatra eventually led to both of their suicides ten years later. Their relationship was in those ancient times well-known and a popular topic. William Shakespeare 1,600 years later brought their relationship to light again when he published his First Folio of Antony and Cleopatra in 1623.

PLUS, the most famous of the Early Church Christian people was Saul of Tarsus whose name was changed to Paul of Tarsus, the Apostle to the Gentiles. All Christians in the AD Early Church had either known or knew of Paul from Tarsus.

The only first-hand information we have about the Communion Martyr Tarsicius is from the Spanish Pope Damasus (c. 304-384) who inscribed what happened on Tarsicius’ tomb in the Catacomb of Callixtus. Based on the inscription on his grave, Tarsicius died in c.275. 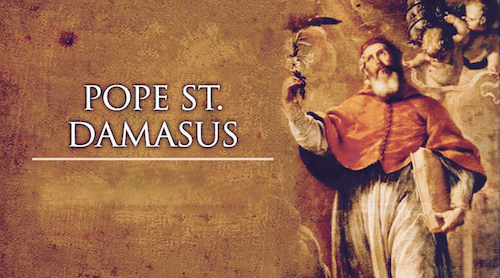 “When a wicked group of young fanatics flung themselves on Tarsicius who was carrying the Eucharist, not wanting to profane the sacrament, thereby preferred to give his life rather than yield up
The Body of Christ to the rabid dogs.”

Apparently the young Tarsicius was charged with taking the Eucharist Bread to a shut-in. When “the young fanatics” teased and heckled him and asked to see or to have what he was carrying, Tarsicius would not. They began to beat him up. There is in the legend a Soldier who was passing by. He saw the young battered boy on the ground, picked up his lifeless body and took him to the church.

Tarsicius would not give up a crumb of the Eucharist/Communion Bread which had been by the priest’s prayer turned into the actual Body of Christ—called transubstantiation. (The Protestants believe the Bread and Wine/Grape juice is “a remembrance” of Christ’s Sacrifice on the Cross for our sins.)

Cyril of Jerusalem (313—386 AD) was a contemporary of Pope Damasus. It is enlightening to read a little of his lecture about Communion. It describes to the reader the holiness and sanctity of the Eucharist elements: 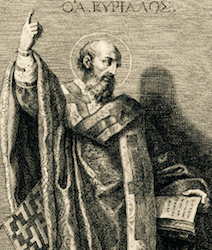 “Then after you have with care sanctified your eyes by the touch of the holy Body, partake…giving heed lest you lose any particle of it (the Bread). For should you lose any of it, it is as though you have lost a member of your own body, for tell me, if any one gave you gold dust, would you not with all precaution keep it fast, being on the guard lest you lose any of it and thus suffer loss? How much more cautiously then will you observe that not a crumb falls from you, of what is more precious than gold and precious stones.” Catechetical Lecture 5

It is written much later about Tarsicius that when his battered body was found, he had held on so tightly to the Bread, it had gone into his chest and shone out like gold. Who can fathom or substantiate such information? BUT if is for SURE the ardent and believing young Tarsicius is with His Lord and Savior.

“Blessed are those who are persecuted for righteousness’ sake, for theirs is the kingdom of heaven,” Matthew 5:10

One imagines young Tarsicius among the Holy Throngs in the Kingdom.—Sandra Sweeny Silver