“This ivory likely decorated the cover of a Gospel book. The abbreviated Latin inscription refers to the opening lines of Mark’s Gospel: ‘I am the voice of one crying in the wilderness.’ The miniature church resembles surviving monuments in Cologne. A former owner’s stamp is to the right of the desk at which Mark sits.”

Many people, Christian or not, have no idea that “scholars” since the 1800’s have been debating about the subject: Does the Gospel of Mark end at the Short Ending of Mark 16:8:

“8 And they went out quickly, and fled from the sepulchre; for they trembled and were amazed: neither said they any thing to any man; for they were afraid.” KJV

“9 Now when Jesus was risen early the first day of the week, he appeared first to Mary Magdalene, out of whom he had cast seven devils. 10 And she went and told them that had been with him, as they mourned and wept. 11 And they, when they had heard that he was alive, and had been seen of her, believed not. 12 After that he appeared in another form unto two of them, as they walked, and went into the country. 13 And they went and told it unto the residue: neither believed they them. 14 Afterward he appeared unto the eleven as they sat at meat, and upbraided them with their unbelief and hardness of heart, because they believed not them which had seen him after he was risen. 15 And he said unto them, Go ye into all the world, and preach the gospel to every creature. 16 He that believeth and is baptized shall be saved; but he that believeth not shall be damned. 17 And these signs shall follow them that believe; In my name shall they cast out devils; they shall speak with new tongues; 18 They shall take up serpents; and if they drink any deadly thing, it shall not hurt them; they shall lay hands on the sick, and they shall recover. 19 So then after the Lord had spoken unto them, he was received up into heaven, and sat on the right hand of God. 20 And they went forth, and preached every where, the Lord working with them, and confirming the word with signs following. Amen.”

CLICK HEERE  for article on the word “Amen” in the Bible

In one (1) Armenian MS of the Gospels dated 986 (below), discovered by F.C. Conybeare in 1891, Mark 16:9-20, the Long Ending of Mark, is attributed to the “Elder Aristion,” one of the 70 Disciples of Jesus. There is no textual proof by the unknown scribe of the Armenian MS. 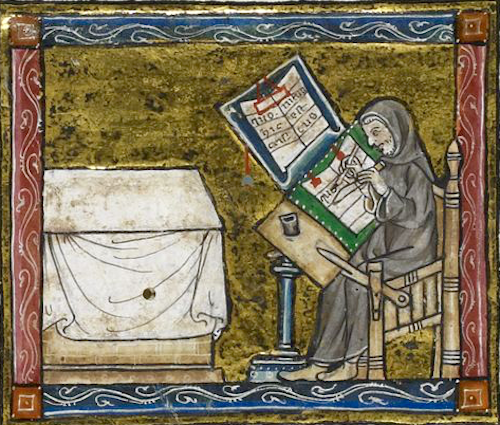 But in most “modern” Bibles, like in my NIV version, there is a space above Mark 16:9-20 that usually says:

“The earliest manuscripts and some ancient witnesses do not have Mark 16:9-20.” The translators, however, go on to include Mark 16:9-20 in our Bibles.

The big “fuss/controversy” is, however, recent. We have to go way back (sarcasm) to the late 1800’s and what became known as the Wellhausen School Of Higher Criticism or just Higher Criticism. Julius Wellhausen was a German Biblical scholar (1844-1918) who first became famous for his Prolegomena zur Geschichte Israels (The History of Israel) in 1883. In his book he stated definitely that the Jewish Torah (the Pentateuch/the first five Books in the Old Testament) was not written by Moses but was a redaction of another four independent texts dated centuries before Moses. Let it be said definitely that Wellhausen had NO PROOF of the existence of those earlier books, but that made no difference in his “scholarship.” 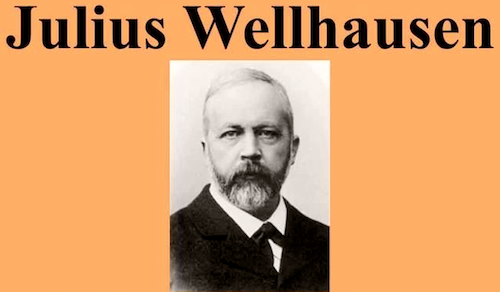 Wellhausen as well as Johann G. Eichhorn and F.S.E. Scheiliermacher, et al are credited with being the founders of the School of Higher Criticism. That School of Higher Criticism or Textual Criticism and its impact on how one looks on the Bible as well as other literary texts has become so dominant that Biblical scholars of all stripes and beliefs accept much of their so-called scholarship, in spite of the fact that those “scholars” never offer actual TEXTUAL PROOFS for their hypotheses and are usually predisposed to not believe in God or miracles. 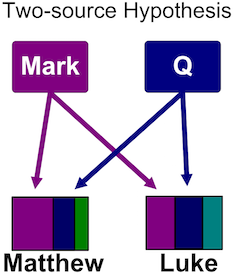 They are the “scholars” who have given us “Q SOURCE,” a totally hypothetical (“conjectural, speculative, suppositional, theoretical”) theory that states the Gospels Matthew, Mark and Luke were absolutely not written by those men because they had never even known Jesus and those Gospels were all written after 70 AD. Matthew, Mark and Luke’s Gospels are all taken from “Q Source,” which they describe as a previous gathering of sayings (logia) by Jesus or simply just “oral tradition.”

There has never been discovered the text or manuscripts or even fragments of these Q sources (from German word quelle meaning “source”). But that does not matter. We no longer need objective reality proofs of any thing Biblical. All that is needed is a “scholar” starting with a subjective view, a preconceived position, and loading up his/her very long papers/books with many words and texts and terms that confuse the normal reader. All that is needed is—the assertion without proofs—in order to be taken seriously. The writer will not go into this matter further, but will encourage all who are serious to probe the internet under “Q Source.”

The Westminster Study Edition of the Holy Bible (Philadelphia: Westminster Press, 1948) adequately illustrates the conflict in our present day. The underlined has been inserted by this writer.

“Mark 9-20. This section is a later addition; the original ending of Mark appears to have been lost. The best and oldest manuscripts of Mark end with ch. 16:8. Two endings were added very early. The shorter reads: ‘But they reported briefly to those with Peter all that had been commanded them. And afterward Jesus himself sent out through them from the East even to the West the sacred and incorruptible message of eternal salvation’ The longer addition appears in English Bibles; its origin is uncertain; a medieval source ascribes it to an elder Ariston (Aristion), perhaps the man whom Papias (c. A.D. 135) calls a disciple of the Lord….Thus, on the basis of good external evidence and strong internal considerations it appears that the earliest ascertainable form of the Gospel of Mark ended with 16.8. At the same time, however out of deference to the evident antiquity of the longer ending and its importance in the textual tradition of the Gospel, the Committee decided to include verses 9-20 as part of the text, but to enclose them within double square brackets to indicate that they are the work of an author other than the evangelist.”

Westminster straddled both fences in 1948. Frederick H. A. Scrivener (1813-1891), member of the committee which published the Revised Version of the Bible, admits two/both as verifiable endings to Mark: “We ought to add that some Armenian codices which contain the paragraph have the subscription ‘Gospel after Mark’ at the end of verse 8 as well as of verse 20, as though their scribes, like Cod. L’s, knew of a double ending to the Gospel.” Bruce Metzger (1914-2007), Biblical scholar and professor at Princeton Theological Seminary, knows, for sure: ““Today we know that the last twelve verses of the Gospel according to Mark (xvi. 9-20) are absent from the oldest Greek, Latin, Syriac, Coptic, and Armenian manuscripts, and that in other manuscripts asterisks or obeli (marks that indicate “spurious”) mark the verses as doubtful or spurious.”

There are a few early extant copies of the Bible containing the Gospel of Mark which do NOT include the Long Ending of Mark 16:9-20:

There are, however, very early evidences for the inclusion of Mark 16:9-20 which precede in time the above Bibles from the 300’s to 1100’s by several hundred years.

Irenaeus (c. 130-202), a very early writer, was a Christian theologian and minister who spent his adult life defending orthodoxy and fighting heresies, writes in Against Heresies 3.10.6: 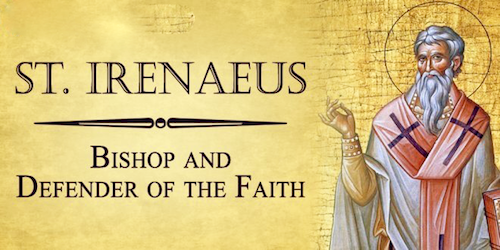 “Also, towards the conclusion of his Gospel Mark says: ‘So then, after the Lord Jesus had spoken to them, He was received up into heaven, and sits on the right hand of God’ (Mark 16:19) confirming what had been spoken by the prophet: ‘The Lord said to my Lord, Sit on My right hand, until I make Your foes Your footstool.’ (Psalm 110:1) Thus God and the Father are truly one and the same; He who was announced by the prophets, and handed down by the true Gospel; whom we Christians worship and love with the whole heart, as the Maker of heaven and earth, and of all things therein.”

Clearly Irenaeus, living about 200 years before Sinaiticus or Vaticanus were copied, KNEW the Long Ending of Mark and quotes a verse from it.

Justin Martyr (c. 100-165), one of the first and best apologists for the faith, in his First Apology uses words in Mark 16:20 as a fulfillment of Messianic prophecy in his examination of Psalm 110. His pupil Tatian the Syrian (c.120-180), writer and theologian, in his Diatessaron (Harmony of the Gospels) incorporates material from all the four Gospels and includes Mark 16:9-20.

Irenaeus, Justin, Tatian and Hippolytus were very early Christian men (100’s) who were born and raised when some who had heard/seen Jesus as youngsters or teens and some of the Seventy Disciples were still alive. It is very persuasive that all four of them, born in the 100’s AD, KNEW AND CITED the Long Ending of Mark, the ending that has been traditionally in the New Testament. The book by Irenaeus quoting Mark 16:19 is OLDER than the earliest manuscripts we have of the Gospel of Mark. These four attestations of the Long Ending being included in Mark pre-date any edition of any other early Bibles.

Writers in the 200’s long before the Codex Vaticanus, also, used the Longer Ending of Mark: Porphyry (234-305 AD) did and in the De Rebaptismate (On Re-baptism) by an unknown author included The Longer Ending. The other manuscripts and fragments of Mark 16:9-20 being extant and used over the early centuries are too numerous to mention. In the c. 300’s or earlier in the Calendar of Greek Church lessons they used Mark 16:9-20 as the verses to be read on Ascension Day and on St. Mary Magdalene’s Day.

Vincentius (died c. 304 AD), Bishop of Thibori, at the 7th Council of Carthage held under Cyprian in 256 in the presence of the 87 assembled African bishops, quoted Mark 16:17,18 which was recorded in the minutes.

Jerome (331–420 A.D.). At the request of Pope Damasus I for a Latin revision of the Bible, Jerome produced the official Catholic version of the Bible called the Latin Vulgate. Jerome consulted several manuscripts, all of which contained the The Long Ending. His confirmation of Mark 16:9-20 is seen in the Vulgate.

In that one Armenian MS, Matenadaran 2374, of the Gospels dated 986, a note written in the marginalia between Mark 16:8 and 16:9 says, “Ariston ertzou” meaning “By Ariston the Elder/Priest.” That one allusion to an unknown Ariston by an unknown scribe possessing unknown sources has given lots of fire to the recent controversy. It has driven untold amounts of modern “scholars” to prove that the Long Ending, so called, of the Gospel of Mark was definitely not written by John Mark. It is an important assertion because it questions the doctrine of verbal inspiration of the Bible as did the scholarly conclusion that the first five books of the Old Testament were not written by Moses but were cobbled together from unknown sources (Q sources) pre-dating Moses by hundreds of years.

As can be seen, The Long Ending in Mark included in Mark’s Gospel the verses 16: 9-20 for hundreds of years in the Early Church. This is a strong refutation of “scholarly speculations” 1,600 years AFTER Mark wrote his Gospel.—Sandra Sweeny Silver