“So, because Jesus was doing these things on the Sabbath, the Jewish leaders began to persecute him. In his defense Jesus said to them….’How can you believe, when you receive glory from one another and do not seek the glory that comes from the only God? Do not think that I will accuse you to the Father. There is one who accuses you: Moses, on whom you have set your hope. For if you believed Moses, you would believe me; for he wrote of me. (Deuteronomy 18:15, 18) But if you do not believe his writings, how will you believe my words?’” John 5:16, 17; 44-47

Moses (died c. 1400’s BC) or Moshe in Hebrew was a man in ancient history who led the Israelites out of 400 years of slavery in Egypt. Their exit is called The Exodus. (Exodus 12) God gave to Moses the Ten Commandments in Exodus 20:1-17 and Deuteronomy 5:1-21.

“Then the LORD said to Moses, ‘Write down these words, for in accordance with these words I have made a covenant with you and with Israel.’ So he was there with the Lord forty days and forty nights; he did not eat bread or drink water. And he wrote on the tablets the word of the covenant, the Ten Commandments. It came about when Moses was coming down from Mount Sinai (and the two tablets of the testimony were in Moses’ hand as he was coming down from the mountain), that Moses did not know that the skin of his face shone because of his speaking with Him.” Exodus 34:27-29

It is often posited by some writers that Moses and all of the people mentioned in the Old and the New Testaments were fictitious people and the Bible is filled with myths. That is, of course, not true. Archeologists who uncover Biblical places and people as well as ancient writers like Strabo who mention Biblical people like Moses have no theological axes to grind. The careful person does not have to believe in the God of the Bible or the assertions made therein, but they do have to take seriously the Bible as a source of history.

Strabo (c. 64/63 BC—24 AD) in his valuable Geography 16.35-38 writes about Moses. Strabo was a Greek geographer, historian and philosopher. Of his several works only his Geography survives. Strabo was descended on his mother’s side from a prominent family whose members had held important positions under the reign of King Mithridates VI of Pontus. [CLICK HERE for “Mithridates & Poisoning” article]

Strabo loved to travel and to read about foreign places. Strabo believed that a descriptive approach to the mores and morals of a people was a more practical approach to geography than just giving locations.

The following is Strabo’s commentary on the Jews and Moses in Geography 16. 35-38:

“Of this description are the inhabitants of Galilee, of the plain of Jericho and of the territories of Philadelphia and Samaria.….although there is such a mixture of inhabitants, the report most credited…and believed respecting the temple and the inhabitants of Jerusalem is, that the Egyptians were the ancestors of the present Jews. An Egyptian priest named Moses, who possessed a portion of the country called Lower Egypt…being dissatisfied with the established institutions there, left it and came to Judaea with a large body of people who worshipped the Divinity. He declared and taught that the Egyptians and Africans entertained erroneous sentiments in representing the Divinity under likeness of wild beasts and cattle of the field. (Exodus 20:2-4)

…(and) that the Greeks also were in error in making images of their gods after the human form.”

Strabo continues: “For God, said Moses, may be this one thing which encompasses us all, land and sea, which we call heaven or the universe or the nature of things. (Deuteronomy 3:24) Who then of any understanding would venture to form an image of this Deity resembling anything with which we are conversant? On the contrary, we ought not to carve any images, but to set apart some sacred ground and a shrine worthy of the Deity and to worship Him without any similitude: (“You shall not make for yourself an image in the form of anything in heaven above or on the earth beneath or in the waters below. You shall not bow down to them or worship them.” Exodus 20:4, 5)

(Moses) taught that those who made fortunate dreams were to be permitted to sleep in the temple where they might dream both for themselves and others; that those who practiced temperance and justice and none else might expect good or some gift or sign from the God from time to time. By such doctrine Moses persuaded a large body of right-minded persons to accompany him to the place where Jerusalem now stands.

He easily obtained possession of (Jerusalem), as the spot was not such as to excite jealousy nor for which there could be any fierce contention; for it is rocky and although well supplied with water, it is surrounded by a barren and waterless territory. The space within the city is 60 stadia in circumference (c. 5.6 miles) with rock underneath the surface. Instead of arms, he taught that their defense was in their sacred things and the Divinity (Exodus 15:2) for whom he was desirous of finding a settled place, promising to the people to deliver such a kind of worship and religion as should not burden those who adopted it with great expense, nor molest them with so-called divine possessions nor absurd practices. Moses thus obtained their good opinion and established no ordinary kind of government.” 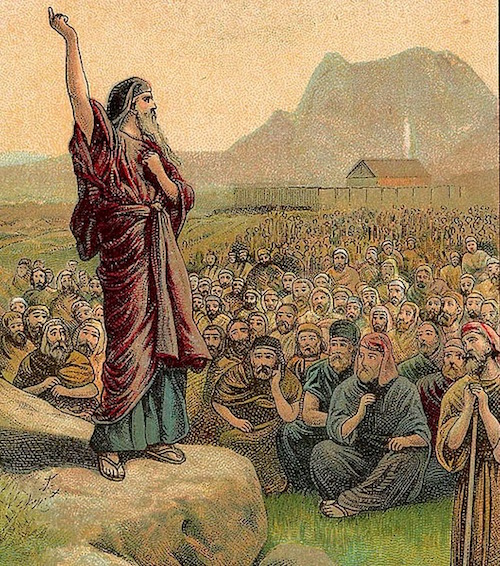 Strabo continues: “All the nations around willingly united themselves to him, allured by his discourses and promises. His successors continued for some time to observe the same conduct, doing justly and worshipping God with sincerity. Afterwards superstitious persons were appointed to the priesthood and then tyrants. From superstition arose abstinence from flesh, from the eating of which it is now the custom to refrain and circumcision, excision (removal of an organ by cutting) and other practices which the people observe.

CLICK HERE for “Circumcision In The Ancient World” article

The tyrannical government produced robbery; for the rebels plundered both their own and the neighboring countries. Those also who shared in the government seized upon the property of others and ravaged a large part of Syria and of Phoenicia. Respect, however, was paid to the Acropolis; it was not abhorred as the seat of tyranny, but honored and venerated as a temple.” Strabo, Geography 16.35-38 So writes Strabo.

As an aside: the Jews never invaded Greece, so the Acropolis was never in play.—Sandra Sweeny Silver