Emperor Severus went to Britain in 208. He was intent on conquering Caledonia (modern Scotland), but the ancient Scots were fierce fighters and fought him tooth and nail until 211.

“…But as he advanced through the country he experienced countless hardships in cutting down the forests, leveling the heights, filling up the swamps, and bridging the rivers; but he fought no battle and beheld no enemy in battle array. The enemy purposely put sheep and cattle in front of the soldiers for them to seize, in order that they might be lured on still further until they were worn out….unable to walk, they would be slain by their own men, in order to avoid capture, so that a full fifty thousand died. But Severus did not desist….having been conveyed through practically the whole of the hostile country (for he actually was conveyed in a covered litter most of the way, on account of his infirmity).” 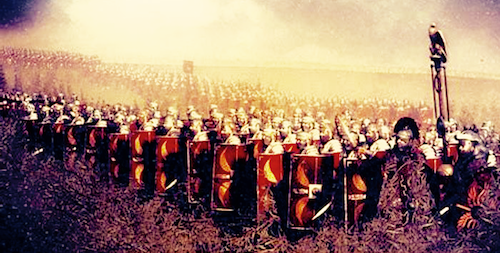 Severus lost thousands, Cassius says “50,000,” of the troops he had taken into that northern part of Britain and was in no mood to give the Caledonians a peace treaty when they asked for one. He was now intent on exterminating the Caledonians, telling his soldiers: ‘Let no-one escape sheer destruction, no-one our hands, not even the babe in the womb of the mother, if it be male; let it nevertheless not escape sheer destruction.’” Cassius Dio, Roman History, LXXV.1.1–2

“As Severus was preparing to engage with the Caledonians: “his sickness carried him off on the fourth of February….After this his body, arrayed in military garb, was placed upon a pyre, and as a mark of honour the soldiers and his sons ran about it; and as for the soldiers’ gifts, those who had things at hand to offer as gifts threw them upon it, and his sons applied the fire. Afterwards his bones were put in an urn of purple stone, carried to Rome, and deposited in the tomb of the Antonines. It is said that Severus sent for the urn shortly before his death, and after feeling of it, remarked: ‘Thou shalt hold a man that the world could not hold.’” Cassius Dio Ibid. 77. 13-16

Obviously Severus had a high opinion of himself. He was, as Emperor of Rome, the most known and influential man in his world at that time. When his remains were back in Rome, he would become one of the many gods pagan Rome worshipped. The Roman historian Herodion who lived as a contemporary of Severus for 40 years gives a long and vivid account of Severus’ funeral. It can be surmised from his account, often in the present tense, that Herodion attended the Emperor’s funeral:

“It is the Roman custom to elevate to divine status those emperors who at their death leave sons…To begin with, public mourning, a combination of festive feeling and religious ceremony, is observed throughout the entire city…. then a wax image is fashioned in the exact likeness of the corpse and placed on a large, high couch of ivory draped with coverings embroidered with gold. This wax figure lies on the couch like a sick man, pale and wan. During most of the day people sit on each side of the couch; on the left is the entire Senate, clad in black; on the right are all the women who…are entitled to honor and respect….The various ceremonies mentioned above continue for seven days. Every day the physicians come and visit the couch; after pretending to examine the sick man, they announce daily that his condition is growing steadily worse. When it appears that he is dead, the noblest of the equestrians and picked young senators lift the couch and carry it along the Sacred Way to the Old Forum….Tiers of seats are erected on each side of the couch: on one side sits a chorus of children from the noblest and most distinguished families; on the other, a chorus of women…each choral group sings hymns and paeans arranged in solemn and mournful measures. The couch is then carried out of the city to the Field of Mars, where…a square building has been constructed entirely of huge wooden beams in the shape of a house. The whole interior of this building is filled with firewood….

They bring the couch to this structure and carry it up to the second story; then they add every kind of perfume and incense the earth provides, together with all the fruits, herbs, and juices that are gathered for their fragrance. Every province, every city, every man of fame and distinction is happy to furnish these last gifts in the emperor’s honor….a cavalry exhibition is staged around the building….Chariots, too, are driven around the building in similar formations by drivers in purple robes; these chariots carry statues whose faces are those of Romans who fought or ruled in distinguished fashion. When these rites have been completed, the emperor’s successor puts a torch to the structure, after which the people set it on fire on all sides. The flames easily and quickly consume the enormous pile of fire-wood and fragrant stuffs…. 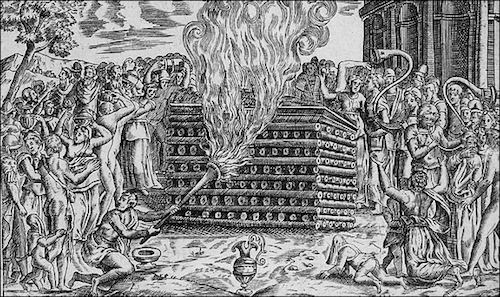 From the topmost and smallest story, as if from a battlement, an eagle flies forth, soaring with the flames into the sky; the Romans believe that this eagle carries the soul of the emperor from the earth up to heaven. Thereafter the emperor is worshiped with the rest of the gods.” Herodion (170-240), History of the Roman Empire From The death Of Marcus Aurelius to Gordian III 4.2.1-11

The first ruler of Rome was Julius Caesar. He was not recognized as an Emperor, but Julius did aspire to be “king,” Those aspirations precipitated his assassination in 44 BC. After his death, however, he was “deified.” Caesar became a god.

Severus knew he was going to become a god at his death because all Emperors before him had been crowned gods. Severus would be one of the many gods the people were compelled to worship. He knew a certain group of people in his kingdom believed there was only One God. Rome had been trying for over 100 years to exterminate these people who were called Christians. They would not worship the gods of Rome or the Emperors like Severus no matter what punishments Rome devised.

Christians believed a Jew named Jesus of Nazareth from Judea was the Son of this One and Only God. They worshipped this Jesus as the Christ, the Messiah long-predicted by the Jews in their Writings.

But no matter how many of these deluded people the Emperors since the time of Nero had killed and mutilated, those Christians had died willingly and praying—for the last 150 years. Rome could not stop those “atheists,” as they were called, from spreading the Good News of Jesus’ Resurrection from the dead.

The first historian of the Christian Church Eusebius, wrote in Church History 6.1:2.3:

“When Severus began to persecute the churches, glorious testimonies were given everywhere by the athletes of religion. This was especially the case in Alexandria, to which city, as to a most prominent theater, athletes of God were brought from Egypt and all Thebais according to their merit, and won crowns from God through their great patience under many tortures and every mode of death….when Severus was stirring up persecution against the churches, in every place splendid martyrdoms of the athletes of piety were accomplished.”

Rome and all its Emperor gods like Severus are dead, long gone. The worship of the One God and His Son Jesus the Christ lived on and still lives on as do those innumerable “athletes of God” who are still soldiering on.—Sandra Sweeny Silver 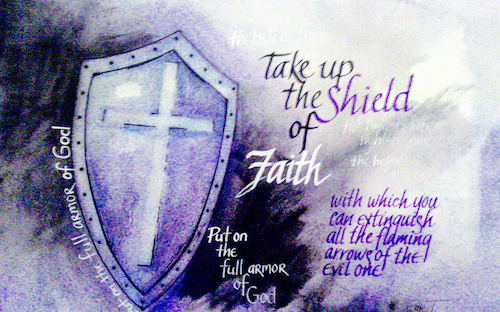