St. Augustine—354—430 AD. Augustine of Hippo, also known as Saint Augustine, was a theologian, philosopher, and the bishop of Hippo Regius in Numidia, Roman North Africa. His Roman mother Monica (now known as St. Monica) was a Christian and raised him as such. Augustine did not give his life to Christ until he was c. age 33. In his late teens and 20’s he struggled with sexual impurities and various current philosophies, primarily with Manichaeism. The Lord spared his praying mother Monica (332—387) to see the conversion of her son to Christ—a year after his conversion in c. 386.

Augustine’s Confessions, written in Latin, was finished in c. 400. It includes the autobiography of his sin-plagued youth and his conversion to Christ.

He was raised on the Bible by his mother and it was the words in the Bible which brought him to his Christian faith. As a theologian/philosopher he was always in all ways devoted to “Sola Scriptura” meaning “by Scripture alone,”—a fundamental theological doctrine that posits the Christian Scriptures are the sole infallible source of authority for Christian faith and practice. He served as the Christian Bishop of Hippo on the coast in Algeria from 396 to 430. He died there. He was born in Thagaste about 60 miles from Hippo. 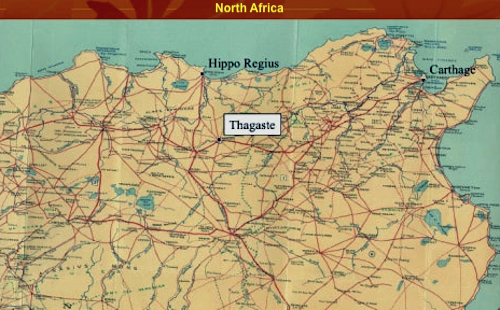 Some of his struggles and Augustine’s conversion begin now “in his own words”: 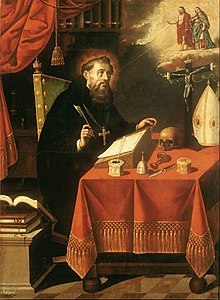 (From ages 17-19) “To Carthage I came, where a cauldron of unholy loves bubbled up all around me. I loved not as yet, yet I loved to love….I searched about for something to love, in love with loving…..For within me I had a dearth of that inward food, Yourself, my God, though that dearth caused me no hunger….For this reason my soul was far from well, and, full of ulcers, it miserably cast itself forth, craving to be excited by contact with objects of sense. Yet, had these no soul, they would not surely inspire love. To love and to be loved was sweet to me, and all the more when I succeeded in enjoying the person I loved. I befouled, therefore, the spring of friendship with the filth of concupiscence, and I dimmed its lustre with the hell of lustfulness….

I fell precipitately, then, into the love in which I longed to be ensnared….and secretly arrived at the bond of enjoying; and was joyfully bound with troublesome ties, that I might be scourged with the burning iron rods of jealousy, suspicion, fear, anger, and strife.” Augustine, Confessions 3.1

“At that unstable period of my life, I studied books of eloquence, wherein I was eager to be eminent from a damnable and inflated purpose, even a delight in human vanity. In the ordinary course of study, I lighted upon a certain book of Cicero, whose language, though not his heart, almost all admire. This book of his contains an exhortation to philosophy, and is called Hortensius…. I yearned for an immortality of wisdom, and began now to arise Luke 15:18 that I might return to You.

(Luke 15:18–19 “ I will arise and go to my father, and I will say to him, “Father, I have sinned against heaven and before you. I am no longer worthy to be called your son. Treat me as one of your hired servants.”

….How ardent was I then, my God, how ardent to fly from earthly things to You! Nor did I know how You would deal with me. For with You is wisdom. In Greek the love of wisdom is called philosophy, with which that book inflamed me…. There be some who seduce through philosophy….There is also disclosed that most salutary admonition of Your Spirit, by Your good and pious servant: “”Beware lest any man spoil you through philosophy and vain deceit, after the tradition of men, after the rudiments of the world, and not after Christ: for in Him dwells all the fullness of the Godhead bodily.” (Colossians 2:8-9)

And since at that time as Thou, O Light of my heart, know, the words of the apostle (i.e. the New Testament) were unknown to me, I was delighted with that exhortation, in so far only as I was thereby stimulated, and enkindled, and inflamed to love, seek, obtain, hold, and embrace, not this or that sect, but wisdom itself…For this name, according to Your mercy, O Lord, this name of my Saviour Your Son, had my tender heart piously drunk…and whatsoever was without that name, though never so erudite, polished, and truthful, took not complete hold of me.” Augustine, Confessions 4

“So, then, by a humble piety we return to You; and you purge us from our evil customs, and art merciful unto the sins of those who confess unto You, and hears the groaning of the prisoner, and loosens us from those fetters which we have forged for ourselves….

Suddenly (when he was in the garden) I heard the voice of a boy or girl chanting over and over again, “pick it up; read it; pick it up, read it.” (Translated from the Latin “Tolle Lege, Tolle Lege” and pronounced “tol-lay lah-jhay”— it means “take up and read.”)

So damning the torrent of my tears, I got to my feet, for I could not but think that this was a command to open the Bible and read the first passage I should light upon: “Go and sell what you have and give it to the poor, and you shall have treasure in heaven. and come and follow me” (Matthew 19:21)….

I quickly returned to the bench…snatched up the apostle’s book…and in silence read the paragraph on which my eyes fell: “Not in rioting and drunkenness, not in chambering and wantonness, not in strife and envying, but put on the Lord Jesus Christ and make no provision for the flesh to fulfill the lusts thereof” (Romans 13:13)…. I wanted to read no further, nor did I need to. For instantly, as the sentence ended, there was infused in my heart something light the light of full certainty and all the gloom of doubt vanished away.” Augustine, Confessions 8—Article by Sandra Sweeny Silver