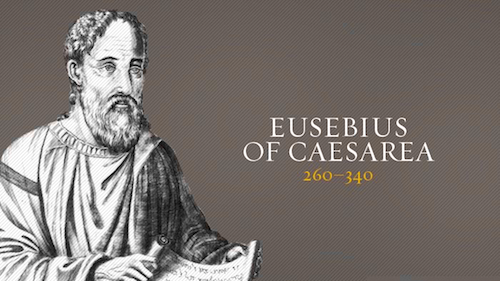 Eusebius (c. 260—May 340 AD), the Bishop of Caesarea, called the “Author of Christian History,” was the first person to gather together and to publish the writings of all the men who had written about Jesus and the early Christians from c. 100 AD to his own time in the 200’s and early 300’s AD. Eusebius was a good friend of Constantine the Great, Emperor of Rome, and thus had access to all the libraries and depositories of his time. In the beginning of his historic work he writes:

“Having gathered therefore from the matters mentioned here and there by them whatever we consider important for the present work, and having plucked like flowers from a meadow the appropriate passages from ancient writers, we shall endeavor to embody the whole in a historical narrative, content if we preserve the memory of the lines of succession of the apostles of our Saviour; if not indeed of all, yet of the most renowned of them in those churches that are the most noted, and which even to the present time are held in honor.

This work seems especially important to me because I know of no ecclesiastical writer who has devoted himself to this subject. I hope that it will appear most useful to those who are fond of historical research.” Eusebius, Church History 1.56 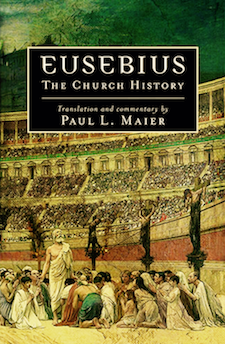 This writer and the untold scores of writers from Eusebius’ time to the present have always taken Eusebius at his word. Without this diligent historian, the world would not have many of the first centuries’ writers whose works have been lost. We begin Herod’s death with Eusebius’ Church History Book 1.8.1-17: i

“When Christ was born, according to the prophecies, in Bethlehem of Judea, at the time indicated, Herod was not a little disturbed by the enquiry of the magi who came from the east, asking where he who was born King of the Jews was to be found —

for they had seen his star, and this was their reason for taking so long a journey; for they earnestly desired to worship the infant as God, — for he imagined that his kingdom might be endangered; and he enquired therefore of the doctors of the law, who belonged to the Jewish nation, where they expected Christ to be born. When he learned that the prophecy of Micah (Micah 5:2) announced that Bethlehem was to be his birthplace he commanded, in a single edict, all the male infants in Bethlehem, and all its borders, that were two years of age or less, according to the time which he had accurately ascertained from the magi, to be slain, supposing that Jesus, as was indeed likely, would share the same fate as the others of his own age.

But the child anticipated the snare, being carried into Egypt by his parents, who had learned from an angel that appeared unto them what was about to happen. These things are recorded by the Holy Scriptures in the Gospel. (Matthew 2)

It is worth while, in addition to this, to observe the reward which Herod received for his daring crime against Christ and those of the same age. For immediately, without the least delay, the divine vengeance overtook him while he was still alive, and gave him a foretaste of what he was to receive after death.

It is not possible to relate here how he tarnished the supposed felicity of his reign by successive calamities in his family, by the murder of wife and children, and others of his nearest relatives and dearest friends. The account, which casts every other tragic drama into the shade, is detailed at length in the histories of Josephus. (The Antiquities of the Jews AND The Wars of the Jews)

How, immediately after his crime against our Saviour and the other infants, the punishment sent by God drove him on to his death, we can best learn from the words of that historian (Josephus—37-100 AD) who, in the seventeenth book of his Antiquities of the Jews, writes as follows concerning his end:

“But the disease of Herod grew more severe, God inflicting punishment for his crimes. For a slow fire burned in him which was not so apparent to those who touched him, but augmented his internal distress; for he had a terrible desire for food which it was not possible to resist. He was affected also with ulceration of the intestines, and with especially severe pains in the colon, while a watery and transparent humor settled             about his feet. He suffered also from a similar trouble in his abdomen. Nay more, his privy member was putrefied and produced worms. He found also excessive difficulty in breathing, and it was particularly disagreeable because of the offensiveness of the odor and the rapidity of respiration.

He had convulsions also in every limb, which gave him uncontrollable strength. It was said, indeed, by those who possessed the power of divination and wisdom to explain such events, that God had inflicted this punishment upon the King on account of his great impiety.”

Again Eusebius: “The writer mentioned above (Josephus) recounts these things in the work referred to. And in the second book of his History he gives a similar account of the same Herod, which runs as follows:

Josephus: “The disease then seized upon his whole body and distracted it by various torments. For he had a slow fever, and the itching of the skin of his whole body was insupportable. He suffered also from continuous pains in his colon, and there were swellings on his feet like those of a person suffering from dropsy, while his abdomen was inflamed and his privy member so putrefied as to produce worms. Besides this he could breathe only in an upright posture, and then only with difficulty, and he had convulsions in all his limbs, so that the diviners said that his diseases were a punishment.

But he, although wrestling with such sufferings, nevertheless clung to life and hoped for safety, and devised methods of cure. For instance, crossing over Jordan he used the warm baths at Callirhoë, which flow into the Lake Asphaltites, but are themselves sweet enough to drink.

His physicians here thought that they could warm his whole body again by means of heated oil. But when they had let him down into a tub filled with oil, his eyes became weak and turned up like the eyes of a dead person. But when his attendants raised an outcry, he recovered at the noise; but finally, despairing of a cure, he commanded about fifty drachms to be distributed among the soldiers, and great sums to be given to his generals and friends.

Then returning he came to Jericho, where, being seized with melancholy, he planned to commit an impious deed, as if challenging death itself. For, collecting from every town the most illustrious men of all Judea, he commanded that they be shut up in the so-called hippodrome.

And having summoned Salome, his sister, and her husband, Alexander, he said: ‘I know that the Jews will rejoice at my death. But I may be lamented by others and have a splendid funeral if you are willing to perform my commands. When I shall expire surround these men, who are now under guard, as quickly as possible with soldiers, and slay them, in order that all Judea and every house may weep for me even against their will.’

And Josephus says in the same book: “And again he (Herod) was so tortured by want of food and by a convulsive cough that, overcome by his pains, he planned to anticipate his fate. Taking an apple he asked also for a knife, for he was accustomed to cut apples and eat them. Then looking round to see that there was no one to hinder, he raised his right hand as if to stab himself.”

In addition to these things the same writer (Josephus) records that “he slew another of his own sons before his death, the third one slain by his command, and that immediately afterward he breathed his last, not without excessive pain.”

Eusebius again: “Such was the end of Herod, who suffered a just punishment for his slaughter of the children of Bethlehem, which was the result of his plots against our Saviour.”

After this an angel appeared in a dream to Joseph in Egypt and commanded him to go to Judea with the child and its mother, revealing to him that those who had sought the life of the child were dead. To this the evangelist (Matthew) adds: “But when he heard that Archelaus did reign in Judaea in the room of his father Herod, he was afraid to go thither: notwithstanding, being warned of God in a dream, he turned aside into the parts of Galilee.’” Matthew 2:22

So ends not only Herod but the early writer Eusebius’ narrative of Herod’s death (spiced with a narrative from Josephus who preceded Eusebius by some 160 years). The Eusebius recount from the Matthew account of the Magis proves, also, the very early origin of Matthew’s Gospel.— Sandra Sweeny Silver