Athenaeus (c. late 100’s into 200’s AD) was a very learned Greek writer and rhetorician. His Deipnosophistae (Philosophers at Dinner) is a fascinating ancient survival containing the conversations of a group of Greek literate people invited to a banquet. They talk of culinary things and other historical and literary stories about outstanding people and events still living or who had lived centuries before their first century AD Greek banquet.

One such topic was a ship called the Syracusia built c. 240 BC and designed by the famed Archimedes for King Hieron of Syracuse (died c. 215 BC). Archimedes (died c. 212 BC) was very famous in his time and, hands down, the greatest “Renaissance” man who ever lived.

CLICK HERE for article on the Archimedes’ Antikythera Mechanism

Athenaeus states he got all the information about this legendary ship from the writings of Moschion aka Machon: “Moschion writes as follows.” Deipnosophistae 5.3. Nothing by Moschion has survived the tramp of history. But it is, nevertheless considered to be an accurate description through Athenaeus of this most amazing ship in the ancient world. Almost. 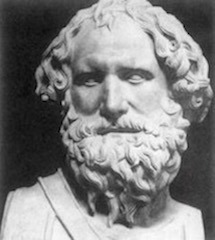 Archimedes (left) had boasted to King Heiron that he could move anything, could solve any mechanical problems by principles he had discovered.

The King challenged him to build and to launch into the water the biggest and the best ship ever. After all, Archimedes had stated about the principle and power of the lever: “Give me a place to stand, and I shall move the earth.” (Pappus of Alexandria, 290-350 AD, Synagoge, Book VIII).

According to ancient writers, he climbed out of his bath and ran, buck naked, through the streets of Syracuse yelling “EUREKA! EUREKA!!” “I HAVE FOUND IT! I HAVE FOUND IT!”

All of the “quotes” parts in this article will be from Athenaeus’ book Deipnosophistae 5.3.

Slaves and other very able men actually built the Syracusia, but it was “superintended by the mathematician Archimedes….timber was brought from Aetna, enough in quantity for the building of sixty quadriremes.” A quadrireme was c.115 feet long and 30 feet wide. The Syracusia was about c. 361 feet long. The largest merchant ships at that time were c. 150 ft long. Notice in the following the description of efforts to get pitch for insulation and to prevent the hull from “biofouling,” to prevent the attachment of water fouling organisms rather than to remove them. They assembled:

“…hemp from Iberia for the cables, hemp and pitch from the river Rhone and all needful from many places…got together shipwrights and all other kinds of artisans…One half, then, of the entire ship he finished in six months…as each part of the ship was completed it was overlaid with tiling made of lead….This part of the ship, then, was ordered to be launched in the sea, that it might receive the finishing touches there. But after considerable discussion in regard to the method of pulling it into the water, Archimedes the mechanician alone was able to launch it with the help of a few persons. For by the construction of a windlass he was able to launch a ship of so great proportions in the water. Archimedes was the first to invent the construction of the windlass. The remaining parts of the ship were completed in another period of six months.” Archimedes’ windlass is still used today (below): 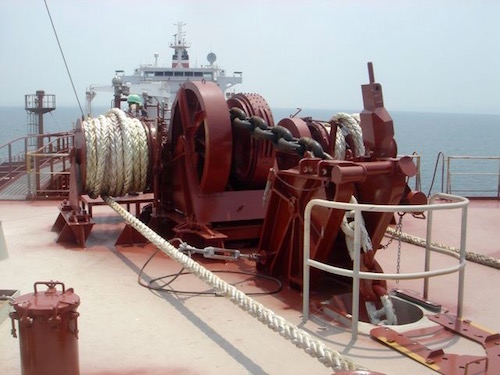 The Syracusisa was three decks high. ”Couch” was one of the length measures used (3 people on a standard Greco-Roman couch) in ancient times as one sees in the text. Now begins the description of what sounds like a modern first-class cruise ship:

“Now the ship was constructed to hold twenty banks of rowers, with three gangways. the lowest gangway which it contained led to cargo…the second deck was designed for the use of those (men and women passengers) who wished to enter the cabins; after this came the third and last, which was for men posted under arms. Belonging to the second gangway were cabins for men ranged on each side of the ship, large enough for four couches (12 people), and numbering thirty. The officers’ cabin could hold fifteen couches (45 people) and contained three apartments of the size of three couches (9 people); that toward the stern was the cooks’ galley. All these rooms had a tessellated floor (mosaics) made of a variety of stones, in the pattern of which was wonderfully wrought the entire story of the Iliad.”

The astonishing floor mosaics with scenes from Homer’s Iliad were in all the rooms reserved for passengers on the second floor deck of the Syracusia. Those mosaics are one of the first mentions in literature of an entire floor mosaic. It took 300 skilled artists one whole year to execute them.

Athenaeus continues: “On the level of the (3rd story) there were a gymnasium and promenades built on a scale proportionate to the size of the ship; in these were garden-beds of every sort, luxuriant with plants and watered by lead tiles hidden from sight; then there were bowers of white ivy and grape-vines, the roots of which got their nourishment in casks filled with earth, and receiving the same irrigation as the garden-beds.”

In 2009, Ambius was commissioned to create the world’s first “garden at sea” (below) aboard the world’s largest ship, Royal Caribbean’s Oasis of the Seas. But we know from the above text the 2009 Ambius creation of “a Garden on the Sea” was NOT the world’s first ship with a “Garden at Sea.” 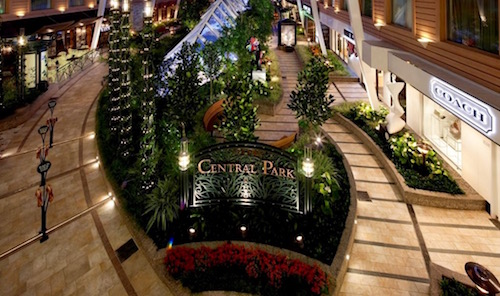 “….Built next to these was a shrine to Aphrodite large enough to contain three couches , with a floor (mosaic) made of agate and other stones, the most beautiful kinds found in the island; it had walls and ceiling of Cyprus-wood, and doors of ivory and fragrant cedar; it was also most lavishly furnished with paintings and statues and drinking-vessels of every shape.

Adjoining the Aphrodite room was a library large enough for five couches (c.15 people), the walls and doors of which were made of boxwood; it contained a collection of books, and on the ceiling was a concave dial made in imitation of the sun-dial on Achradina (a section in Syracuse).”

“….There was also a bathroom, of three-couch size, with three bronze tubs and a wash-stand of variegated Tauromenian marble, having a capacity of fifty gallons. (Our modern tubs hold c. 70 gallons of water.)…There were ten stalls for horses on each side of the ship; and next them was the storage-place for the horses’ food, and the belongings of the riders and their slaves….There was also a water-tank at the bow, which was kept covered and had a capacity of twenty thousand gallons; it was constructed of planks, caulked with pitch and covered with tarpaulins. By its side was built a fish-tank enclosed with lead and planks; this was filled with sea-water, and many live fish were kept in it.….Outside the interior, a row of colossi, nine feet high, ran round the ship; these supported the upper weight and the triglyph, all standing at proper intervals apart. And the whole ship was adorned with appropriate paintings.

There were also eight turrets on it (see below), of a size proportional to the weight of the ship….two cranes were made fast, and over them portholes were built, through which stones could be hurled at an enemy sailing underneath. Upon each of the turrets were mounted four sturdy men in full armor and two archers. The whole interior of the turrets was full of Saracen (handbows) and missiles.” 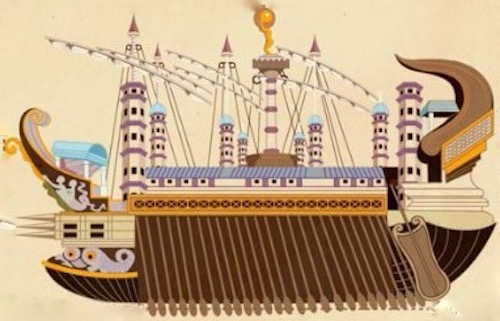 Athenaeus: “A wall with battlements and decks athwart the ship was built on supports; on this stood a stone-hurler, which could shoot by its own power a stone weighing one hundred and eighty pounds or a javelin eighteen feet long. This engine was constructed by Archimedes. Either one of these missiles could be hurled six hundred feet….There were four anchors of wood, eight of iron….The bilge-water, even when it became very deep, could easily be pumped out by one man with the aid of the screw, an invention of Archimedes.”

The Archimedes Screw (below), as it is called, is a machine for raising water or removing water from the hold of a large ship. Perhaps this previous sentence from Athenaeus’ book is when Archimedes first invented and used that screw?

The Syracusia sailed from Syracuse to Alexandria, Egypt where it was presented as a gift to the Ptolemaic Pharaoh and named the Alexandria. 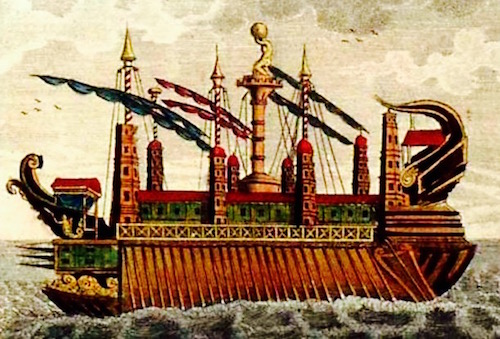 What must the royalty and wealthy who sailed on the Syracusia to Egypt have thought? Imagine they were as stunned by that ship as they were stunned by Egypt’s pyramids and Sphinx who were constructed several thousand years before Archimedes’ ship was even conceived.

Thousands of years previous to the Syracusia another 3-story ship was built—Noah’s Ark:

Watch the Noah’s Ark video at the end of this article and come to your own conclusion as to which was the most amazing ship ever built in Antiquity—Syracusia or the Ark.—Sandra Sweeny Silver