“While they (Mary and Joseph) were there (in Bethlehem), the time came for the baby to be born, and Mary gave birth to her firstborn, a son. She wrapped him in cloths and placed him in a manger, because there was no guest room available for them. And there were shepherds living out in the fields nearby, keeping watch over their flocks at night. An angel of the Lord appeared to them, and the glory of the Lord shone around them, and they were terrified. But the angel said to them, ‘Do not be afraid. I bring you good news that will cause great joy for all the people. Today in the town of David (Bethlehem) a Savior has been born to you; he is the Messiah, the Lord. This will be a sign to you: You will find a baby wrapped in cloths and lying in a manger.’ 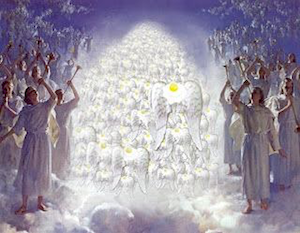 Suddenly a great company of the heavenly host appeared with the angel, praising God and saying, ‘Glory to God in the highest heaven, and on earth peace to those on whom his favor rests.’ When the angels had left them and gone into heaven, the shepherds said to one another, ‘Let’s go to Bethlehem and see this thing that has happened, which the Lord has told us about.’”
Luke 2:6-14

From Jesus’ birth to His death, He was surrounded by “a great company,” by crowds. In the above verses a crowd of angels announces to lowly shepherds the Birth of the Good Shepherd.

Because Jesus was a healer and miracle-worker, thousands of people were always flocking to Him, trying to touch Him and be healed and just trying to see this famous Man and be there when He performed amazing miracles.

“Jesus withdrew with his disciples to the lake, and a large crowd from Galilee followed. When they heard about all he was doing, many people came to him from Judea, Jerusalem, Idumea, and the regions across the Jordan and around Tyre and Sidon. Because of the crowd he told his disciples to have a small boat ready for him, to keep the people from crowding him. For he had healed many, so that those with diseases were pushing forward to touch him.”
Mark 3:7-10

In these verses people were coming to Jesus from c. 12,000 square miles! They came from the East, from the West, from the North and from the South to see and to be with Jesus of Nazareth. He was not, as some believe, a “local celebrity.” Jesus was in His day an intra-national celebrity. 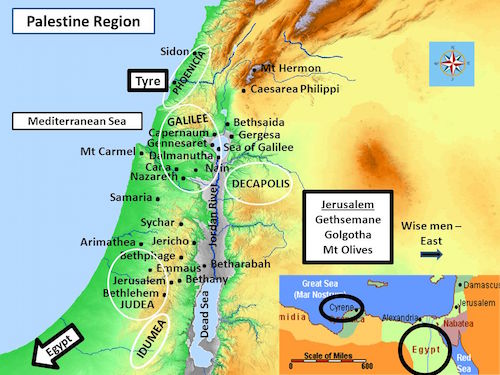 “Large crowds followed Him from Galilee and the Decapolis and Jerusalem and Judea and from beyond the Jordan.” Matthew 4:25 “And … around Tyre and Sidon.” Mark 3:8

The Greek for a part of this verse is ἠκολούθησαν αὐτῷ ὄχλοι πολλοὶ ἀπὸ—“followed him crowds great from.” The word Ὄχλοι” means “multitudes.” In English the word means “a great number of people gathered together; crowd; throng.” Jesus was, unless He withdrew, always crowded by crowds. Jesus withdrew often in order to rest, to be by Himself with His disciples or to pray.

“When Jesus heard what had happened, he withdrew by boat privately to a solitary place. Hearing of this, the crowds followed him on foot from the towns. When Jesus landed and saw a large crowd, he had compassion on them and healed their sick.

As evening approached, the disciples came to him and said, ‘This is a remote place, and it’s already getting late. Send the crowds away, so they can go to the villages and buy themselves some food.’ Jesus replied, ‘They do not need to go away. You give them something to eat.’

‘We have here only five loaves of bread and two fish,’ they answered.
‘Bring them here to me,’ he said. And he directed the people to sit down on the grass. Taking the five loaves and the two fish and looking up to heaven, he gave thanks and broke the loaves. Then he gave them to the disciples, and the disciples gave them to the people. They all ate and were satisfied, and the disciples picked up twelve basketfuls of broken pieces that were left over. The number of those who ate was about five thousand men, besides women and children.” Matthew 14:13-21 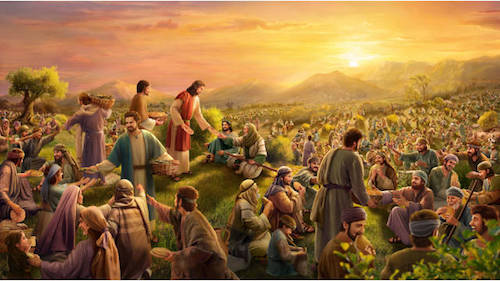 During the last days of His life when Jesus entered Jerusalem on an ass (Palm Sunday) when according to Josephus, there were a million Jews who had come to celebrate the Passover Feast:

“A very large crowd spread their cloaks on the road, while others cut branches from the trees and spread them on the road. The crowds that went ahead of him and those that followed shouted,

‘Hosanna to the Son of David!’
‘Blessed is he who comes in the name of the Lord!’
‘Hosanna in the highest heaven!’

When Jesus entered Jerusalem, the whole city was stirred and asked, ‘Who is this?’ The crowds answered, ‘This is Jesus, the prophet from Nazareth in Galilee.’” Matthew 21:8-11

Several days later on a Friday, Jesus had been betrayed by Judas Iscariot, had been condemned by Jewish and Roman authorities and was crucified on a hill called Golgotha. With a million people crowded into Jerusalem and vicinity, large crowds must have seen Him dragging His cross down the streets or heard about His crucifixion and went to the scene out of curiosity or watched the crucifixion from their windows or followed Him as a believer or went to the scene to curse Him. His crucifixion did not go unnoticed by His many followers or the priests who condemned Him.

Thousands of years later, thousands all over the world crowd together to hear about Jesus from evangelists.

In 2019, a year after Billy Graham died in February of 2018, up to 59,000 young Christians gathered at the Camping World Stadium (below) in Orlando, Florida for “The Send” to dedicate their lives to taking the Gospel to the many crowds of people in the world. 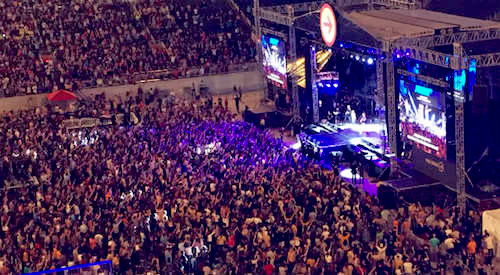 There are 34 verses in the Gospels referring to CROWDS AROUND JESUS.—Sandra Sweeny Silver