The Arabs and the Jews have not agreed on very much since c. 2000 BC. The two sons of Father Abraham, Ishmael and Isaac, have been fighting ever since Abraham chose Isaac, the father of the Jews, rather than his first son Ishmael, father of the Arabs, to inherit the Eretz, the Land. But they both agree that the ancient Persian King Cyrus was really GREAT. Why?

Arabic Iran was not until recently in 1953 called Iran. For most of its history Iran was called Persia. The tiny province of the ancient Pars tribe gave its name to the region. 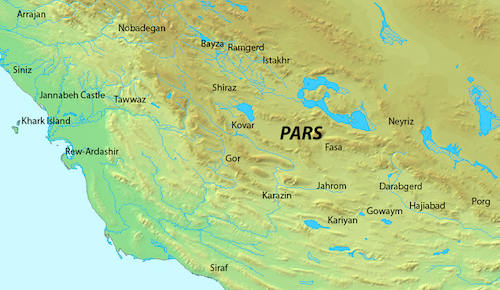 Cyrus the Great was a Persian. When at the age of c. 40, Cyrus conquered Babylon in 559 BC, he began his conquest of the world. As the Cyrus Cylinder says: “Cyrus…king of Babylon, king of Sumer and Akkad, king of the four corners of the world.”

This very small Cylinder was found in 1879 by an expedition sponsored by the British Museum. It was placed as a “foundation deposit” at the base of a temple and was fashioned shortly after Cyrus—on his road to being The Great—conquered Babylon in c. 539 BC. Cyrus proceeded to conquer most of his world all the way to the Indus River on the border of India.

Even today Cyrus the Great is venerated in Iran. Below in 2016, about 2,500 years after Cyrus established the Persian Empire, tens of thousands of Iranian students and protestors rally in front of Cyrus’ Tomb with their demands (below). On October 29, 2018 Iranians marked the International Day of Cyrus the Great, that ancient ruler of the Persian empire whose legacy is credited with forging the Persian/Iranian national identity. 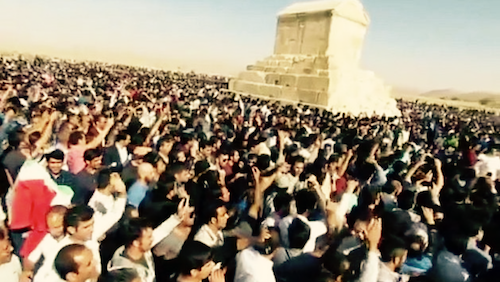 The descendants of Ishmael, the Arabs and their blood brothers, the descendants of Isaac, the Jews, also believe Cyrus was GREAT. Why? Because when the Jews were taken captive to Babylon in c. 586 BC and lived there c. 70 years, it was Cyrus the Great who overthrew the Babylonians and allowed the Jews to go back to Jerusalem.

The Jewish scribe and priest Ezra (c. 480–440 BC) wrote the following account of Cyrus’ release of the Jews from their Babylonian Captivity and of Cyrus’ provisions for the rebuilding of the Temple in Jerusalem

‘The Lord, the God of heaven, has given me all the kingdoms of the earth and he has appointed me to build a temple for him at Jerusalem in Judah. Any of his people among you may go up to Jerusalem in Judah and build the temple of the Lord, the God of Israel, the God who is in Jerusalem, and may their God be with them. And in any locality where survivors may now be living, the people are to provide them with silver and gold, with goods and livestock, and with freewill offerings for the temple of God in Jerusalem.’

Then the family heads of Judah and Benjamin, and the priests and Levites—everyone whose heart God had moved—prepared to go up and build the house of the Lord in Jerusalem. All their neighbors assisted them with articles of silver and gold, with goods and livestock, and with valuable gifts, in addition to all the freewill offerings. Moreover, King Cyrus brought out the articles belonging to the temple of the Lord, which Nebuchadnezzar had carried away from Jerusalem and had placed in the temple of his god. Cyrus king of Persia had them brought by Mithredath the treasurer, who counted them out to Sheshbazzar the prince of Judah. This was the inventory:

In all, there were 5,400 articles of gold and of silver. Sheshbazzar brought all these along with the exiles when they came up from Babylon to Jerusalem.” 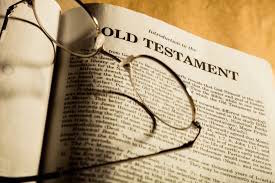 The Cyrus Cylinder, mentioned previously, contains an amazing historical confirmation of the Biblical narrative concerning Cyrus the Great: “All of their peoples I (Cyrus) gathered together and restored to their dwelling-places.”

Cyrus is mentioned 23 times in the Old Testament.

In 1971 the Iranians celebrated the 2500th anniversary of the Persian Empire by minting a coin (below) dedicated to Cyrus the Great and the current ruler, the Shah Mohammad Reza Pahlavi. On the reverse, notice the Cyrus Cylinder. 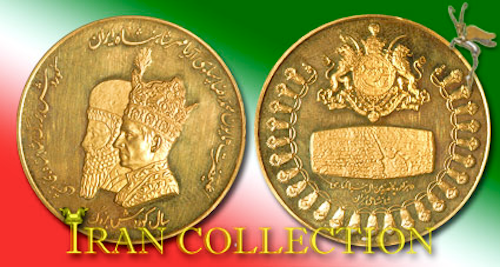 To celebrate the opening in Jerusalem of the American embassy in 2018, legitimizing Jerusalem as Israel’s capital, Israel minted a commemorative coin. That year, also, marked the 70th year of Israel’s state-hood. Cyrus had let the Jews go back to Jerusalem after 70 years in Captivity. And Donald Trump opened the American Embassy in Jerusalem 70 years after the Jews returned to their homeland after the Holocaust.

ABC News: “To celebrate U.S. Embassy move to Jerusalem and Israel’s 70th anniversary, The Israeli Mikdash Educational Center has minted special edition gold and silver-plated coins with images of Donald Trump and Cyrus the Great, ancient Persian Emperor, as well as flags of the United States of America and old Persia.”—Article by Sandra Sweeny Silver 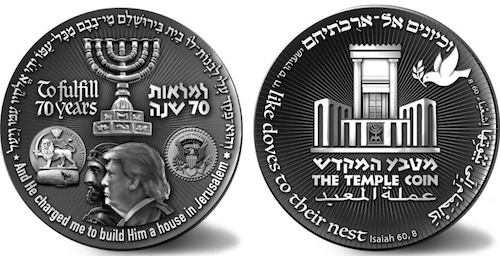