In 286 AD a Roman commander of the fleet in the English Channel named Carausius went rogue and declared himself Emperor of the British Empire. The real Emperor of Rome, Maximian, tried to oust the rogue but was defeated by Carausius’ military skill. 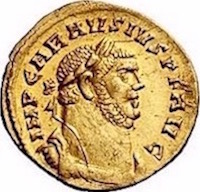 Carausius (reigned 286-293) changed his name to Marcus Aurelius Mausaeus Valerius Carausius. The emboldened new “Emperor of the Britannic Empire” even minted his own coins declaring himself a type of messianic savior: “Redeunt Saturnia Regna, Iam Nova Progenies Caelo Demittitur Alto, meaning “The Golden Ages are back, now a new generation is let down from Heaven above.” Vergil, 4th Eclogue. 6,7 On his coins Carausius, also, called himself “Restorer of Britain.” 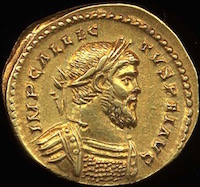 Obviously there was a local dissatisfaction with Rome’s conquest of Britain and Carausius took advantage of that. The Roman legions could not defeat the Emperor of Britain and northern Gaul, but the man he put in charge of his Treasury, Allectus (right), assassinated Carausius in 293 and assumed the Emperor’s throne until he was defeated by the Romans in 296. Rome’s far-flung Empire was now in tact again. Few who know ancient Roman or British history had heard of Carausius, this lost Emperor of Britain.

Until…. Dave Crisp, a British chef, using a simple metal detector discovered in a field near Frome, England a huge hoard of Roman coins (52,503 to be exact) some of which were minted by “Emperor” Carausius. Everyone started asking who was this Roman Emperor named Carausius? On April 11, 2010 a British cook had put the rogue Roman “Emperor of Britain” on the map of ancient history. 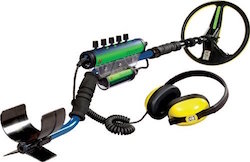 Crisp was an amateur who used a simple metal detector to pursue his hobby, Perhaps he used the cheap Ground Efx Storm Series Mx60 Metal Detector which is $149.95 and can be bought on sale for $99.00. Those who have the inclination and the money can buy a super-duper Minelab Excalibur Li With 10 Metal Detector (left) for $1,949.00 which can be bought on sale: “Now Only: $1,499.00 .”

(IF you are searching ONLY FOR GOLD, there is a metal detector you can buy for $8,000.)

Chef Crisp did not use an expensive one. On a mild April day in 2010 Crisp was pointing his detector around a field near Frome where previously he had found a few old coins.

Suddenly his metal detector made “a funny noise,” he said. He began to dig down about 18 inches and found a small coin on top of a pot of coins. He did what any detectorist should do. He refilled the hole, covered it over and went to an expert. 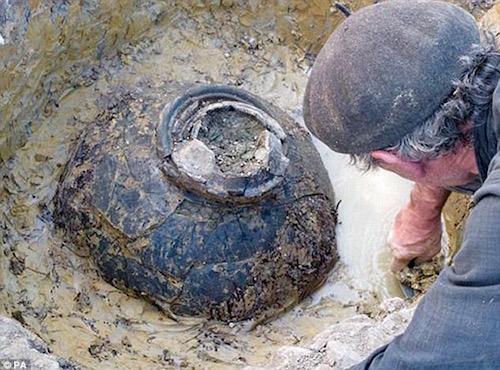 The coins were contained in a ceramic pot 18” in diameter (above) and date from AD 253 to 305. The Frome Hoard of over 52,500 Roman coins was estimated to be worth over $5 million dollars.

Everyone wants to know who gets the money when a hoard is found? In England after the hoard is cleaned and put up for bid, museums and National museums usually buy the underground booty to add to their collections of ancient things. The Museum of Somerset in Taunton used a grant from the National Heritage Memorial Fund to acquire the Frome Hoard in 2011 for c. $5,000,000. 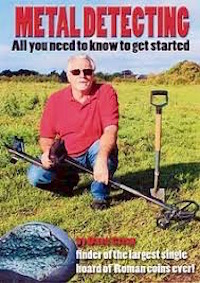 Most importantly, David Crisp gets his picture on the cover of Metal Detecting magazine! Bet he’ll stick with the lucky, cheap detector, don’t you?