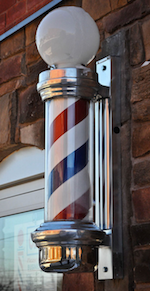 Written on an English barber’s poll in the 1800’s:

“Rove not from pole to pole, but step in here, Where nought excels the shaving but—the beer.”

The Stone Age lasted maybe a millennium until man discovered iron, copper and other metals. It is logical, but not proven, that Stone Age men would prune their beards. It is conjectured they used pumice stones and obsidian as shaving tools. To the right is a Sharpened/flaked obsidian probably used as a razor in the Stone Age.

We do have razors that have survived as such, however. They come from the times of what are called the beginnings of civilization. Egypt was one of the oldest civilizations. 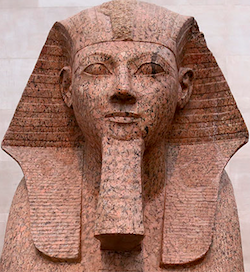 The Egyptian Pharaoh Queen Hatshepsut (c.1478–1458 BC 18th Dynasty) ordered that she, a female, be portrayed in some of her images as a man with a beard (left). Apparently, male pharaohs’ long beards were signs of authority and she was authoritative.

According to the first great historian Herodotus (c. 445 BC) in his History Book II: “….Ancient Egyptians (men and women of all classes) achieved their clean look with depilatory creams, and would then repeatedly rub their faces, heads, arms, and legs with a pumice stone to remove all hair.” 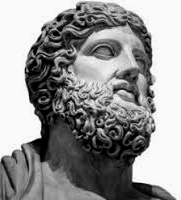 Egyptians were “hairless,” but most men in the ancient world, like the anonymous Greek man on the right, had beards—UNTIL Alexander the Greek (356-323), Conqueror of the ancient world, changed all that. Alexander likely noticed that in hand to hand combat, men often grabbed each other’s beards to kill them. So he had his soldiers cut off their beards. Of course, his huge army of clean-cut men who were heroes gradually influenced other men and it became fashionable to be clean-shaven. Razors of copper and iron were soon made (left).

Even most Romans eventually followed Alexander’s fashion. Emperor Hadrian (117-138) was the first Emperor to be clean-shaven and many Roman men followed his lead.

After Alexander had cleaned men up, most in the ancient, medieval and ensuring years were clean-shaven. But lots of men still wanted their beards. So men sporting beards were taxed, yes, they had to PAY to let their facial hair grow. The English King Henry VIII who had a beard taxed other men who had beards with his Beard Tax in 1535. 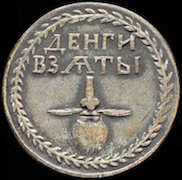 In 1698 Russia was trying to make its men look more like clean-shaven Europeans, so Russian Emperor Peter I levied a Beard Tax. The tsar even gave his police the power to grab men and shave off their beards. Men in Moscow were charged 30 rubles per year and peasants were charged two half-kopeks every time they entered a city. A Russian beard token (like the one on the left from 1705) was carried to indicate that the owner had paid the beard tax imposed by Peter the Great.

There were, however, a group of men in all times of history that would not under any conditions be shaved. Those, of course were the Jews. Their Holy Scriptures required men to have beards: Leviticus19:27 “You shall not cut the hair on the sides of your heads, neither shall you clip of the edge of your beard.”

And the Orthodox Jewish men today continue that over 3,000 years old injunction.

Amish men will shave up until they get married, then let their beards grow for the rest of their lives in obedience of the same Bible verse.

“So Hanun took David’s servants and shaved off half the beard of each and cut off their garments in the middle, at their hips, and sent them away. When it was told David, he sent to meet them, for the men were greatly ashamed. And the king said, ‘Remain at Jericho until your beards have grown and then return.’” (2 Samuel 10:4-5)

Most people imagine Jesus and the men around Him with beards. The New Testament, however, is silent on beards. But there are early Church fathers/writers who had a thing or two to say about beards:

Lactantius (240-320) On the Workmanship of God, Chapter 7: “The nature of the beard contributes in an incredible degree to distinguish the maturity of bodies, or to the distinction of sex, or to the beauty of manliness and strength.”

Clement of Alexandria (150-215) “Impious to Desecrate the Symbol of Manhood”: “But for one who is a man to comb himself and shave himself with a razor, for the sake of fine effect, to arrange his hair at the looking-glass, to shave his cheeks, pluck hairs out of them, and smooth them, how womanly! ….For this is a meretricious and impious form of snare. For God wished women to be smooth, and rejoice in their locks alone growing spontaneously, as a horse in his mane; but has adorned man, like the lions, with a beard, and endowed him, as an attribute of manhood, with a shaggy chest – a sign of strength and rule.” 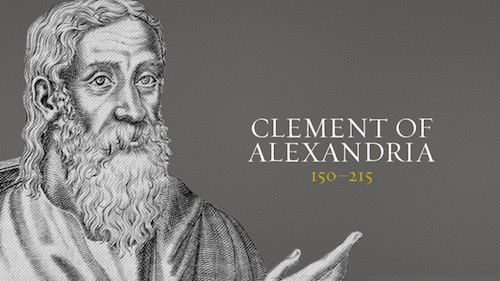 There are other types of razors that trim off things:

“‘Occam’s Razor’ is the stated principle that, all things being equal, the simplest explanation is usually the correct one. This principle cuts away, or slices and leaves aside, a host of potentially competing conclusions or arguments, leaving the simplest and most likely conclusion in place. Thus it is a Razor.”—William Occam (or Ockham) (1285-1347)—Article by Sandra Sweeny Silver 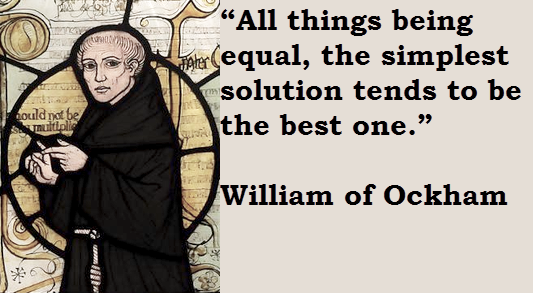