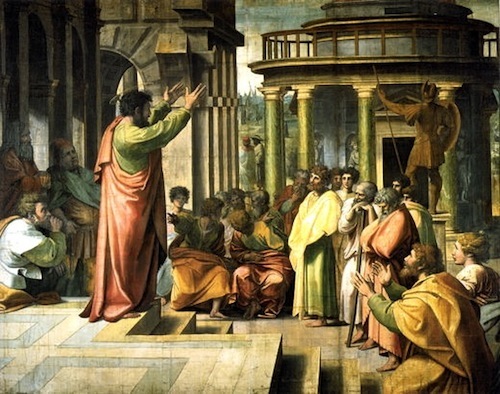 Conversion to Christ changes the individual. Mass conversions to Christ (Christianity) change a culture. An entire change in pagan culture is what is at stake in this passage from Acts 19:

“About that time (c. 56 AD) there arose a disturbance about the Way (early designation for Christianity). A silversmith named Demetrius, who made silver shrines of Artemis, brought in a lot of business for the craftsmen there (in Ephesus). He called them together, along with the workers in related trades, and said: ‘You know, my friends, that we receive a good income from this business. And you see and hear how this fellow Paul has convinced and led astray large numbers of people here in Ephesus and in practically the whole province of Asia.

He says that gods made by human hands are no gods at all. There is danger not only that our trade will lose its good name, but also that the temple of the great goddess Artemis will be discredited; and the goddess herself, who is worshiped throughout the province of Asia and the world, will be robbed of her divine majesty.’

When they heard this, they were furious and began shouting: ‘Great is Artemis of the Ephesians!’ Soon the whole city was in an uproar. The people seized Gaius and Aristarchus, Paul’s traveling companions from Macedonia, and all of them rushed into the theater together….

The assembly was in confusion: Some were shouting one thing, some another. Most of the people did not even know why they were there. The Jews in the crowd pushed Alexander to the front, and they shouted instructions to him. He motioned for silence in order to make a defense before the people. But when they realized he was a Jew, they all shouted in unison for about two hours: ‘Great is Artemis of the Ephesians!’….The city clerk quieted the crowd and said: ‘Fellow Ephesians, doesn’t all the world know that the city of Ephesus is the guardian of the temple of the great Artemis and of her image, which fell from heaven?….You have brought these men here, though they have neither robbed temples nor blasphemed our goddess. If, then, Demetrius and his fellow craftsmen have a grievance against anybody, the courts are open….They can press charges….As it is, we are in danger of being charged with rioting because of what happened today’…. After he had said this, he dismissed the assembly.” Acts 19:23-41 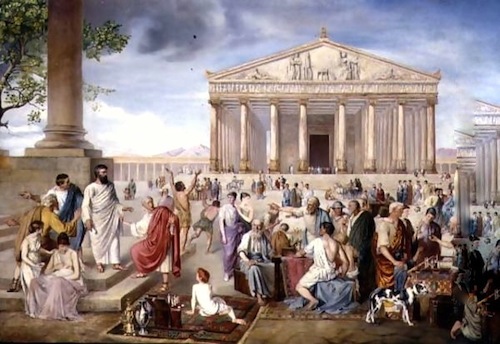 Demetrius the silversmith saw clearly this new message of a One God Who is not embodied in an idol was a threat to not only the livelihood and prosperity of his guild but, also, to the foundation of their city and their society. He had seen all the Ephesians who were raising their hands to God Almighty and were not carrying his silver idols in their hands. He is one of the only people in the New Testament who saw the “handwriting on the wall” for pagan temples, pagan priests, pagan priestesses, pagan worshippers and pagan idols—and tried to stem the tide that would eventually overtake all in the Western world.

Paul, the persuasive and powerful Apostle to the Gentiles, had spent almost three years (c. 53-56) in the prosperous and influential port town of Ephesus in modern Turkey, then called Asia.

His message was so convicting that even “a number who had practiced sorcery brought their scrolls together and burned them publicly. When they calculated the value of the scrolls, the total came to fifty thousand drachmas. (A drachma was a silver coin worth a day’s wages.) In this way the word of the Lord spread widely and grew in power.” Acts 19:19,20

Many people from Ephesus and thousands of people from all over the world at that time who came to Ephesus to trade/deliver goods or on pilgrimage to visit the Temple of Artemis had been converted to Christ and had turned away from the idol worship of the Mother Goddess, the Queen of Heaven, as she was called.

Ephesus had always been the epicenter for the worship of the goddess Artemis aka Diana aka Ishtar aka Astarte, the most famous and most worshiped Mother Goddess in the ancient world for over 1,000 years. She was a fertility goddess and is sculpted with many nourishing breasts cascading down to her abdomen. Many idols, large and small, of this ancient Mother figure have been found all over the Near and Middle East over the centuries.

The Greek poet Antipater of Sidon who compiled the list of the Seven Wonders of the Ancient World in c. 140 AD, described the Temple of Artemis/Diana in Ephesus in his Greek Anthology 9.58: “I have seen the wall of lofty Babylon which is a road for chariots, and the the statue of Zeus by the Alpheus and the hanging gardens, and the colossus of Rhodes, and the huge labour of the high pyramids and the vast tomb of Mausolus; but when I saw the house of Artemis that mounted to the clouds, those other marvels lost their brilliancy, and I said, ‘Lo, apart from Olympus, the Sun never looked on aught so grand.’”

Ephesus was the city whose pride was her magnificent temple. A first temple in honor of the goddess goes back to the Bronze Age (c. 1100 BC). It was destroyed by a flood. A second temple was destroyed by arson. The third and final temple, the one known as one of the Seven Wonders of the Ancient World, was built in c. 323 BC and lasted until 286 AD when it was destroyed by invading Goths. Christianity had by that time supplanted idol worship in much of the Roman world. There was no attempt to rebuild the temple to the once-eternal goddess. Its ruins are witness to the clash of cultures which Demetrius so desperately  predicted and tried to repel.—By Sandra Sweeny Silver