As the Greeks (Mycenaeans) were burning Spartan Troy to the ground in c. 1200 BC, Aeneas is speaking to his royal, frail father Anchises in the Roman author Virgil’s epic about the founding of Rome, the Aeneid II. 857-863.

“Did you suppose, my father,
That I could tear myself away and leave you?
Unthinkable; how could a father say it?
Now if it pleases the powers about that nothing
Stand of this great city; if your heart
Is set on adding your own death and ours
To that of Troy, the door’s wide open for it.”

Aeneas, the Spartan founder of Rome in Virgil’s Aeneid written c. 1,000 years after the Fall of Troy, says Aeneas fled burning Troy with his father on his back.

Aeneas, his young son Julus, his father Anchises and followers eventually land and settle in Italy (then Latium). There, according to Virgil, royal Aeneas and his progeny become the progenitors of the Roman people through Romulus who founded the eponymous Rome.

When Aeneas’ father Anchises dies, there are ceremonial funeral competitions and games in honor of him. Aeneas’ son Julus aka  Ascanius initiated the first Game of Troy at that time. It concluded the ceremony and apparently featured young noblemen like Julus on horseback doing various coordinated maneuvers and labyrinthine exercises like our modern quadrilles.

Friesian Quadrille Team GB at Warrington Show 2017 our Next Big Event is the Friesian Festival 2017! http://fhagbi.co.uk/inspections.html

Posted by Equestrian Quadrille to Music Fanpage on Wednesday, May 31, 2017

Video of Friesian Quadrille Team GB at the Warrington Show 2017 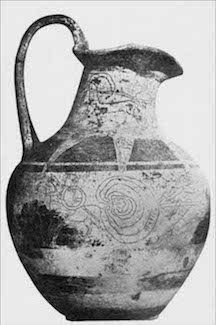 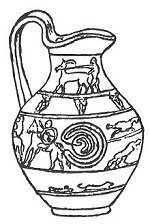 We do not know precisely what this “Game” entailed, but there are hints on a few vases that it was a coordinated, circular drill. On this Etruscan wine vase (left), notice the labyrinthine circle behind the horse, perhaps meant to indicate the course of the Game.

Clearly the Labyrinth in the Game of Troy is a faint reflection of the Cretan Minotaur Legend (c. 1800 BC). Trapped inside the Labyrinth and finding one’s way out could be a metaphor for “triumphing over death” which was the origin of this funeral game performed by Julus, son of Aeneas, for Aeneas’ dead father Anchises. The Tragliatella Vase (c. 620 BC) (right) depicts two horsemen emerging from a spiral marked “Truia” aka “Troy.” 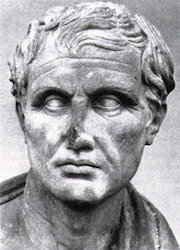 Since the Game of Troy appears to have Cretan/Minoan Labyrinth origins, it was of pre-Aeneas origin and was used by Publius Vergilius Maro (aka Virgil, 70-19 BC) to elevate the Roman royal Spartan genealogy hence Virgil (left) named it Game of Troy? Whatever its origin, Rome appropriated it through Virgil. For the intricacies of the Game of Troy, let Virgil best describe it in his Aeneid 5.5.580-593. Translation by Robert Fitzgerald.

“As files in the three squadrons all in line
Turned away, cantering left and right; recalled
They wheeled and dipped their lances for a charge.
They entered then on parades and counter-parades,
The two detachments, matched in the arena,
Winding in and out of one another,
And whipped into sham cavalry skirmishes
By baring backs in flight, then whirling round
With leveled points, then patching up a truce
And riding side by side. So intricate
In ancient times on mountainous Crete they say
The Labyrinth, between walls in the dark,
Ran criss-cross a bewildering thousand ways
Devised by guile, a maze insoluble,
Breaking down every clue to the way out.
So intricate the drill of Trojan boys
Who wove the patterns of their prancing horses,
Figured, in sport, retreats and skirmishes.”

“Harness the horses, mount the steeds! Take your positions with helmets on! Polish your spears, put on your armor!” Jeremiah 46:4—Article by Sandra Sweeny Silver