Our first modern war to engage a lot of Europe and the United States started In the summer heat on July 28, 1914. The first World War I battle, the Battle of the Marne, was on September 7-8. There were battles over battles in Europe for 4 years and eventually the Allies won against the Germans. An Armistice was signed on November 11, 1918.

HG Wells said that war was “the war to end all wars.” Of course, he was not right. There has been and always will be tribes and nations “at war.” It will never end. Wars have been as far back as we can trace civilizations.

Modern wars like World War I are fought on land, sea and in the air. Ancient wars were fought on land and occasionally on sea. The ancient world, including Rome, had a “fighting season,” a time when they could fight and have a chance to win. The “fighting season” had seven months of “good weather” from March 19 through October 19 when they were not cold and did not have to deal with snow, ice or low temperatures.

In Rome at the end of the “fighting season” on October 19 there was a festival in honor of Mars, the god of war, where they would garner their weapons, fix and update them, do a ritual of purification, put them away for the winter season and celebrate.

Below is an artist’s impression of the Salii, the dancing and leaping priests of Mars, doing their war dance in March and October, beating their lances against sacred shields and leaping and singing an ancient song extolling Mars, the Carmen Saliare. 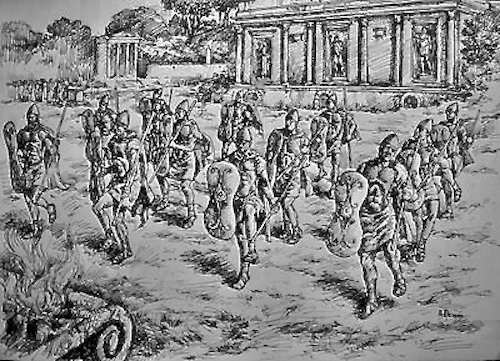 That every-year religious ceremony was called Armilustrium, “ceremony of purification.” It was a solemn as well as joyous ceremony with garlands for the soldiers and trumpets blowing.

The longest “fighting season” in the ancient world was between Rome and Carthage. The Carthaginians controlled the Mediterranean Sea and Rome wanted to  control “everything.” The Three Wars between them lasted off and on for 118 years—called the Punic Wars after the language of Carthage (related to the Phoenician). 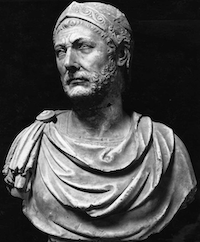 The very famous Carthaginian General Hannibal (left) in the Second Punic War took 40 elephants and 50,000 soldiers over the Alps (below). Hannibal’s crossing of the Alps in c. October 218 BC was one of the major events of the Second Punic War and one of the most celebrated achievements of any military force in ancient warfare. Hannibal’s  forces fought and won against 87,000 Roman soldiers in August of 216 BC. They defeated the Romans at Cannae in southeast Italy. Hannibal is considered today “one of the greatest military commanders in world history.”

Rome eventually won in the Third Punic War when the Romans defeated Hannibal in the autumn of 202 BC at Zama near Carthage. Rome was within its ancient “fighting season.”

In the Spring of 63 BC during their “fighting season” the Roman General Pompey marched his troops into Iberia (now Spain). Rome wanted to control all of the Mediterranean Sea.

The Iberian king Artoces fought Pompey by burning all bridges to protect his soldiers, but Pompey always found ways to get to his army. Artoces’ soldiers took refuge in a dense forest. Pompey’s soldiers cut down some of the forest and then burned the rest to the ground. Artoces finally surrendered. Pompey demanded gold and his children as hostages. The King had no option  Pompey took the gold, his children and Artoces signed the Peace Treaty with Rome. That whole area became a “friend” of Rome and, more importantly, became part of its Empire. 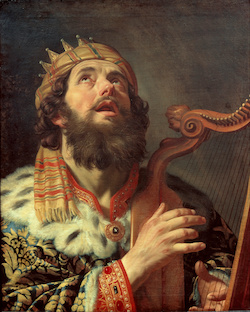 In 1000 BC another even more ancient military commander, King David of the Jews, relied on his God to give him victories in his many battles—in season and out of season:

“Praise be to the Lord my Rock, who trains my hands for war, my fingers for battle.

He is my loving God and my fortress, my stronghold and my deliverer, my shield, in whom I take refuge, who subdues peoples under me.” Psalm 144:1,2