The Septuagint (Latin septuaginta, which means 70) so-named because of the 70 (or 72) Jewish translators of the Hebrew Torah into Koine Greek in Alexandria, Egypt in the 200’s BC. 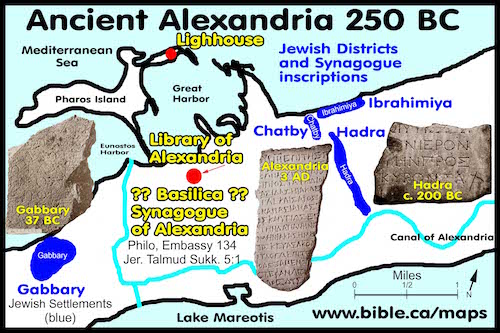 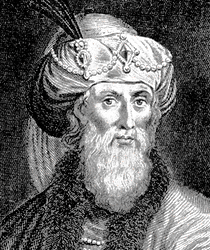 Yosef ben Matityahu (left), his Jewish name, is known as Flavius Josephus to most Westerners. Josephus is best known for his Antiquities of the Jews and The Jewish Wars. The Bible and the two books of Josephus are the most reliable sources for those interested in the ancient world and in the world of the early Christians.

The following is the reliable Josephus’ translation of what a man named Aristeas wrote in his Letter to a man/his brother(?) named Philocrates.

The Letter of Aristeas (dated to c. 200’s BC) describes in detail how a Greek translation of the Law of Moses was made during the reign of the Egyptian Pharaoh Ptolemy II Philadelphus (c. 285–247 BC). Though some moderns doubt its authenticity, the Letter is attested to by many ancient believable writers: in Life of Moses by Philo of Alexandria (c. AD 15), and in an excerpt from Aristobulus of Paneas (c. 160 ) and preserved in Praeparatio Evangelica by Eusebius (300’s AD).

The following is from Josephus’ Antiquities of the Jews — Book 12.2-15

How Ptolemy Philadelphus (Reigned c.283 or 285 to 246 BC) procured the laws of the Jews to be translated into the Greek tongue; and set many captives free; and dedicated many gifts to God.

“When Alexander had reigned twelve years, and after him Ptolemy Soter forty years, (Ptolemy) Philadelphus then took the kingdom of Egypt, and held it forty years within one….

“(This member of the Ptolemaic dynasty) procured the (Jewish) law to be interpreted; and set free those that were come from Jerusalem into Egypt, and were in slavery there; who were an hundred and twenty thousand. The occasion (for writing the Torah in Greek) was this: Demetrius Phalereus, who was library keeper (in the famous ancient Library in Alexandria) to the King, was now endeavoring, if it were possible, to gather together all the books that were in the habitable earth: and buying whatsoever was any where valuable, or agreeable to the King’s inclination; who was very earnestly set upon collecting of books: to which inclination of his Demetrius was zealously subservient. And when once Ptolemy asked him, How many ten thousands of books he had collected, he replied, that he had already about twenty times ten thousand (200,000): but that, in a little time, he should have fifty times ten thousand (500,000). 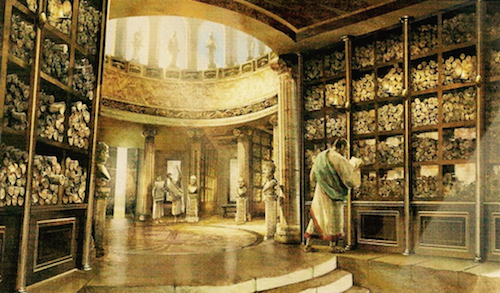 But he said, he had been informed, that there were many books of laws among the Jews, worthy of enquiring after, and worthy of the King’s library; but which being written in characters and in a dialect of their own, will cause no small pains in getting them translated into the Greek tongue: that the character in which they are written seems to be like to that which is the proper character of the Syrians; and that its sound, when pronounced, is like theirs also: and that this sound appears to be peculiar to themselves. 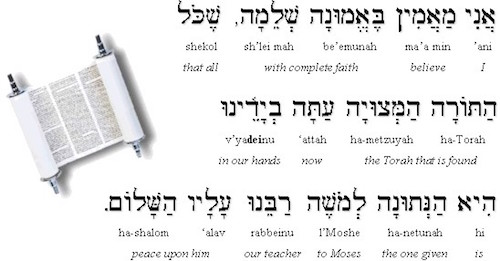 Example of Hebrew writing in The torah

“Wherefore he said, that nothing hindred why they might not get those books to be translated also. For while nothing is wanting that is necessary for that purpose, we may have their books also in this library. So the King thought that Demetrius was very zealous to procure him abundance of books, and that he suggested what was exceeding proper for him to do: and accordingly, he wrote to the Jewish High Priest, that he should act accordingly. 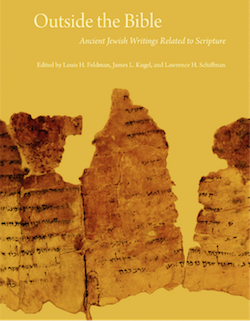 ….Now there was one Aristeus, who was among the King’s most intimate friends, and on account of his modesty very acceptable to him. This Aristeus resolved frequently, and that before now, to petition the King, that he would set all the captive Jews in his Kingdom free….

’Tis not fit for us, O King, to overlook things hastily, or to deceive our selves; but to lay the truth open. For since we have determined not only to get the laws of the Jews transcribed, but interpreted also, for thy satisfaction; by what means can we do this, while so many of the Jews are now slaves in thy Kingdom?….

Wherefore do thou restore these men to their own country; and this do to the honour of God: because these men pay a peculiarly excellent worship to him. And know this farther, that though I (Aristeas) be not of kin to them (the Jews) by birth, nor one of the same country with them, yet do I desire these favours to be done them: since all men are the workmanship of God: and I am sensible that he is well pleased with those that do good. I do therefore put up this petition to thee, to do good to them.’….

“… When this was over, what the King had decreed was quickly brought to a conclusion; and this in no more than seven days time: the number of the talents paid for the captives (Jewish slaves) being above four hundred and sixty: and this, because their masters required the hundred and twenty drachmæ for the children also: the King having, in effect, commanded, that these should be paid for, when he said in his decree, that they should receive the forementioned sum for every slave…. 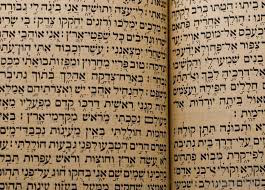 Now when this had been done after so magnificent a manner, according to the King’s inclinations, he gave order to Demetrius to give him in writing his sentiments concerning the transcribing of the Jewish books….Aristeas said ‘And I let you know, that we want the books of the Jewish legislation, with some others. For they are written in the Hebrew characters: and being in the language of that nation, are to us unknown….

“….Now it is necessary that thou shouldst have accurate copies of them. If then it please thee, O King, thou mayest write to the High Priest of the Jews, to send six of the elders, out of every tribe (72 Jewish linguists); and those such as are most skillful of the laws: that by their means we may learn the clear and agreeing sense of these books; and may obtain an accurate interpretation of their contents: and so may have such a collection of these as may be suitable to thy desire.’

When (Aristeas’) epistle was sent to the King, he commanded that an epistle should be drawn up for Eleazar, the Jewish High Priest (c. 260–245 BC), concerning these matters:

‘King Ptolemy to Eleazar the High Priest, sendeth greeting and that they should inform him of the release of the Jews that had been in slavery among them. And he it was to whom Ptolemy wrote, and that in the manner following:

“….And when I had taken the government, I treated all men with humanity; and especially those that are thy fellow-citizens. Of whom I have set free above an hundred thousand, that were slaves; and paid the price of their redemption to their masters, out of my own revenues….I have determined to procure an interpretation of your law, and to have it translated out of Hebrew into Greek, and to be reposited in my library….

Thou wilt therefore do well to choose out and send to me men of a good character, who are now elders in age, and six in number out of every tribe. These, by their age, must be skillful in the laws; and of abilities to make an accurate interpretation of them. And when this shall be finished, I shall think that I have done a work glorious to my self. And I have sent to thee Andreas, the captain of my guard, and Aristeus’ men whom I have in very great esteem”….

And these were what gifts were sent by Ptolemy to Jerusalem, and dedicated to God there. But when Eleazar the High Priest had devoted them to God, and had paid due respects to those that brought them; and had given them presents to be carried to the King; he let them go back to the King. And when they were come to Alexandria, and Ptolemy heard that they were come, and that the seventy elders were come also, he presently sent for Andreas and Aristeus, his ambassadors. Who came to him, and delivered him the epistle which they brought him from the High Priest; and made answer to all the questions he put to them by word of mouth. He then made haste to meet the elders, that came from Jerusalem, for the interpretation of the laws….

“Accordingly when three days were over, after which time they (the Jewish Translators) relaxed and took care of their body: while their food was provided for them in great plenty: besides which Dorotheus (the keeper of the Library in Alexandria), at the King’s command, brought them a great deal of what was provided for the King himself….

But in the morning they came to the court, and saluted Ptolemy: and then went away to their former place: where, when they had washed their hands, and purified themselves, they betook themselves to the interpretation of the laws (the Torah). Now when the law was transcribed; and the labour of interpretation was over: which came to its conclusion in seventy two days: Demetrius gathered all the Jews together to the place where the laws were translated, and where the interpreters were; and read them over….

The multitude did also approve of those elders that were the interpreters of the law….they all, both the priest, and the ancientest of the elders, and the principal men of their common weal made it their request, that since the interpretation was happily finished, it might continue in the state it now was; and might not be altered….

“And when the King had received these books from Demetrius, as we have said already, he adored them; and gave order, that great care should be taken of them, that they might remain uncorrupted. He also desired that the interpreters would come often to him out of Judea; and that both on account of the respects that he would pay them, and on account of the presents he would make them. For he said, ‘It was now but just to send them away: although if, of their own accord, they would come to him hereafter, they should obtain all that their own wisdom might justly require; and what his generosity was able to give them. So he then sent them away….

But by them he sent to Eleazar the High Priest, ten beds, with feet of silver, and the furniture to them belonging; and a cup, of the value of thirty talents. And besides these, ten garments, and purple, and a very beautiful crown, and an hundred pieces of the finest woven linen. As also vials, and dishes, and vessels for pouring, and two golden cisterns, to be dedicated to God…. 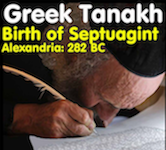 He also desired him, by an epistle, that he would give these interpreters leave, if any of them were desirous, of coming to him; because he highly valued a conversation with men of such learning; and should be very willing to lay out his wealth upon such men. And this was what came to the Jews, and was much to their glory and honour, from Ptolemy Philadelphus.”

The famous Library in Alexandria was accidentally burned down with all its hundreds of thousands of books by Julius Caesar in 48 BC.—Article by Sandra Sweeny Silver 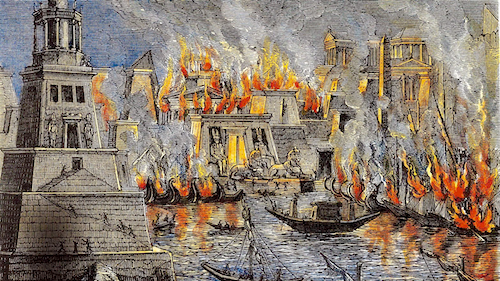