There is a well-preserved and well-executed painting in the Catacomb of Peter and Marcellinus in Rome of Christ, seated on a cushioned, backless seat with an opened scroll in His hand. The Greek letter “A” for Alpha, (the beginning) is to the right of His head and a Greek “ Ω  for Omega (the end) is to the left of His head. A wiry, tall balding Paul is to His right and Peter, bearded and short-haired, is to the left of Jesus and is pointing to Him and the scroll with his right hand. 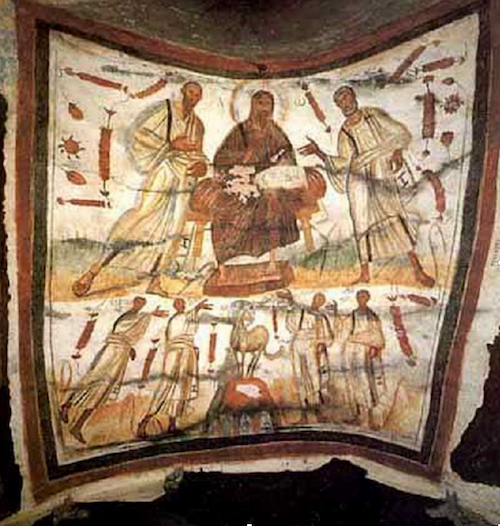 These three, Jesus, Peter and Paul, were for the early Christians of the catacombs (c. 1st to c. 4th century AD) the celestial triad. Jesus is clearly the Book, the Logos, the Alpha and Omega, and Paul and Peter are His two most important witnesses, martyrs. Below and separated from the triad are the martyrs Peter and Marcellinus for whom that catacomb is named and two other martyrs. All four praise and point toward a lamb standing on another throne. In this painting Jesus, as the Word, holding the Word in His hands, is surrounded by those who had given their lives for Him, who believed He was the Passover Lamb seen by John in Revelation 5:6-9: “Then I saw a Lamb, looking as if it had been slain….(the Lamb) came and took the scroll from the right hand of him who sat on the throne….You are worthy to take the scroll, and to open its seal, because you were slain, and with your blood you purchased men for God from every tribe and language and people and nation.”

Jesus was the Logos, “the Word” (what some today call the Bible):

The sacred words in the Old Testament had predicted His coming and the sacred words and deeds in the New Testament had shown Him as fulfillment of the prophecies. The Bible was for them the embodiment of God’s relationship to man. It was the very Words of God and Jesus was the incarnation of those words, God’s Word in flesh. Christians took the words in their parchments very seriously. 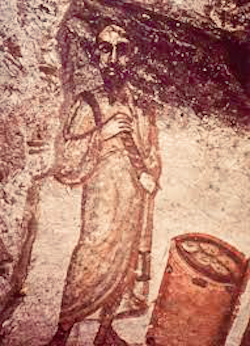 In the Catacomb of the Giordani on the Via Salaria there is a fresco in the crescent-shaped lunette of an arcosolium that depicts a man in a toga holding a Bible/scroll. “The resting place of Silvestri” is inscribed in the book (left).

The catacomb Christians believed their names were written in the Book of Life (Revelation 20:15), the ultimate Book that would be opened on the Day of Judgment. They followed the Logos. They had faith in the Word.

In the Coemeterium Maius there is a 4th century painting of Christ seated on a small throne with boxes of books around Him.

In the Catacomb of Domitilla, a well-executed painting of Christ, flanked by six Apostles on either side of Him, is seated on a throne with the scrolls of the Scripture at His feet.

As these paintings are in a necropolis, it is clear they depict the Judgment that John recorded in the book of Revelation 20:12: “I saw the dead, great and small, standing before the throne, and the books were opened….And the dead were judged by what was written in the books, by what they had done.”

The catacomb dead are the saved people of the resurrection. They are figured on the catacomb walls as orants, worshipers with their hands and arms raised in prayerful praise. Tertullian (c.160-220) testifies that in worship “we (Christians) not only lift up our hands, but we spread them out, modeling them after the Lord’s passion.” Treatise On Prayer

The dead Christians have their arms raised in praise. But they raise them in a way that depicts the Crucifixion of Christ on the Cross, His death for believers.

John was, no doubt, telling us that Jesus the Christ was not only the incarnation of God Himself but was the WORD God spoke to create everything in Genesis 1: 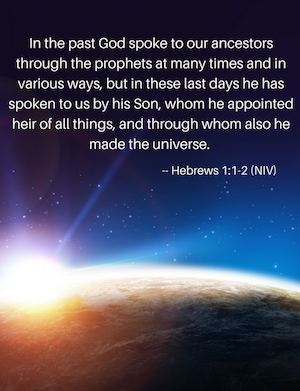 “God said, “Let there be light,” and there was light.”

“Let the water under the sky be gathered to one place, and let dry ground appear.”

“Then God said, “Let the land produce vegetation: seed-bearing plants and trees on the land that bear fruit with seed in it, according to their various kinds.” And it was so.” 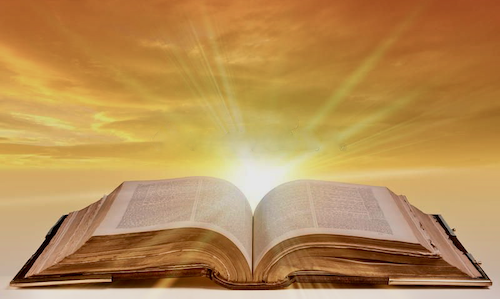