A rebus is “a puzzle in which words are represented by combinations of pictures and individual letters. Early 17th century: from French rébus, from Latin rebus, ablative plural of res meaning a ‘thing.’” OED

A Curious Hieroglyphick Bible is a late 18th century Bible published by IsaiahThomas in Worcester, Massachusetts in 1788. It is a classic children’s book. The Bible is mainly in rebus form (i. e. some words are replaced by pictures).

NOTE TO READER: EACH “S” IN THAT TIME WAS WRITTEN AS “F” EXCEPT WHEN IT ENDED A SENTENCE 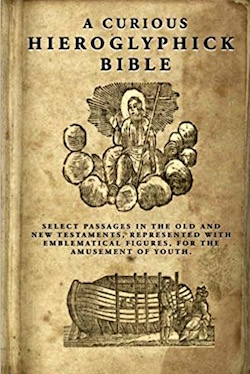 There are only 4 copies still remaining of the Hieroglyphick Bible. One of the 4 copies of this Bible was acquired by the Libraries at Notre Dame University in 2015. The very rare book is in the Rare Books and Special Collections “located on the main floor of the Hesburgh Library at the University of Notre Dame in northern Indiana and is open to students, faculty, visiting researchers, and members of the community Monday through Friday from 9am-5pm (closed weekends and major holidays).”

This unique children’s Bible has almost 500 woodcuts and was the first American “Rebus Bible.” Its editor Thomas states the purpose of this Bible is “to familiarize tender Age, in a pleasing and diverting Manner, with early Ideas of the Holy Scriptures.”

The Curious Hieroglyphick Bible was one of 88 books included in the Library of Congress’s 2012 exhibition “Books That Shaped America.”

Below is a 3 minute video on possibly the first form of writing, Sumerian cuneiform, initially done in “rebus” form.

The first writing and earliest written records are on small clay tablets from the Mesopotamian city of Uruk. Cuneiform (Latin for “wedge-shaped”) writing was probably first used for business purposes, for transactions, lists of commodities and how many of each and terms of agreement. The writings were on baked clay written with a sharpened reed stylus/pen. Baked/fired clay was what these early people used for building the houses and towers in their city, also. Some call these early writings pictographs—pictures used as symbols.

Some believe the Egyptians received their pictographic system of writing called hieroglyphics, meaning “priest writings,” from the Sumerian cuneiforms. Be that as it may, the Egyptian hieroglyphics were, also, a rebus-type of writing.

The English language has 26 letters, characters. By combining these letters we write letters, type emails or texts, write books, read newspapers, etc. Ancient Egyptians had over 2,000 hieroglyphs. The many hieroglyphs we have found for thousands of years in Egyptian tombs and on their stelae, temples and columns were indecipherable to the world until….Napoleon invaded Egypt in 1798.

A French Captain Pierre Bouchard discovered in 1799 a black basalt slab with ancient writing on it near the town of Rosetta, Egypt. When examined by professionals, the Rosetta Stone showed three different writings in three different languages: Egyptian hieroglyphics, Greek and demotic Egyptian (used from 7th century BC until the 5th century AD).   The Greek script said the  three writings were all of the same content—about Pharaoh Ptolemy V (210-181BC). Egyptian hieroglyphics could now after 2,000 years be read.

It was a brilliant and young linguist named Jean-Francois Champollion (1790-1832) who finally broke the code and enabled the translation of the Rosetta Stone. At age 16 Champollion was an expert in ancient Latin, Greek, Coptic and six Oriental languages.

Below is a 5 minute video on how Champollion “broke” the hieroglyphic code. 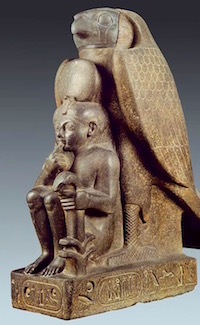 Using the rebus principle of Egyptian hieroglyphic pictures representing words, linguists even figured out the statue to the right was a sculpture of Ramses the Great as a child. The large falcon represents Horus (RA), the Egyptian sun god, who is behind a child (MES) who is holding a sedge plant (SU) in his left hand. Putting the three together, one has the word RA-MES-SU, Ramses. 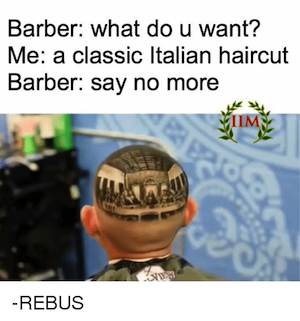