The Theban Legion was one of the many Legions in the Imperial Roman army. When Rome conquered a country, a fighting force was enlisted from the citizenry, trained as Roman soldiers and dispatched, as needed, all over the Empire by the emperors. Legions were comprised of 400 to 6,000 men from many countries.

The Theban Legion contained 6,600 men from the ancient town of Thebes near Luxor and Karnak, Egypt. These Egyptian youths were known as a fierce group of fighters with an allegiance to Caesar. And they were, also, all Christians.

At Saint-Maurice, Switzerland, then called Agaunum, the orders were given to kill all in the Theban Legion. The Legion had refused to obey an order from the Emperor to kill local Christians. The other legions’ soldiers were given orders to “decimate” them by putting to death a tenth of its men. This act was repeated over and over again until the entire Theban legion was put to death.

In command of the Theban Legion was a man named Mauritius—now designated Saint Maurice.

The men in the Theban Legion were steady sufferers. Many of their Egyptian Christian ancestors had suffered persecution and death for several hundreds years and even then some of their families were being killed for Christ at the command of the very Emperors whom they served. It is against the background of the historic persecution of Egyptian Christians and of the ongoing persecution at home in Thebes that their story should be read.

This Letter was written by Eucharius, Bishop of Lyons (c. 380-449), about 115 years after the following events happened:

““From Eucherius to the Lord Holy and Most Blessed Bishop in Christ, Salvius (Bishop of Octodurum)

I am unfolding with my pen an account of the suffering of the holy martyrs who light up Agaunum with their glorious blood.….Let me now recount the very cause of their passion. During the reign of the Maximian who ruled the Roman republic together with Diocletian as his colleague, crowds of martyrs were tortured or killed throughout various provinces….(Maximian) did arm his impiety to extinguish the name of Christianity….he set his weapons directly against (Christianity)…. 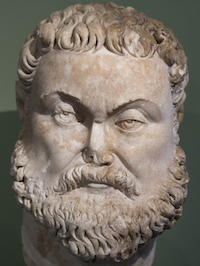 There was at that time in the army a legion of soldiers who were called the Thebaei…that contained 6,600 men under arms. When they had been summoned to his support by Maximian (left) from the regions of the East, these men, active in battle and renowned for their courage, although more renowned for their faith, came. They strove in bravery for the emperor, but in devotion to Christ…Accordingly when these men were assigned to harass the multitude of Christians in the area…they alone dared to refuse the cruel task and declared that they would not obey commands of this king

….When Maximian learned the reply of the Thebaei, he burned with a fierce anger on account of their neglect of his commands and ordered every tenth person from that same legion to be executed by the sword….When this repeat command reached the Thebaei…there rose indiscriminately throughout the camp the hue and cry of men declaring that they would never submit to such sacrilegious tasks….The greatest incitement to faith at that time was the holy Mauritius, primicerius (commander), as it is called of that legion….

Accordingly…they sent to Maximian this message…‘We are your soldiers, O emperor, but God’s servants….We owe military service to you, but just living to Him….No way can we follow an emperor in this, a command for us to deny God our Father, especially since our Father is your God and Father whether you like it or not….

You order us to seek out Christians for punishment. You do not now have to seek out others on this charge since you have us here confessing: We believe in God the Father maker of all and God his Son Jesus Christ….

When Maximian heard these things and realized that the men’s minds were resolute in their faith in Christ…he decreed in one sentence that they were all to be killed and ordered the surrounding military columns to effect the matter….(the other legions) drew their wicked swords against the holy men who did not refuse to die….they were indiscriminately slaughtered by the sword.

They did not cry out even or fight back, but laid aside their arms and offered their necks to their persecutors…remembering this alone, that they were confessing Him who was led to His death without a cry, and like a lamb, did not open His mouth, they, the Lord’s flock of sheep, so to speak, also allowed themselves to be torn by the onrushing wolves, as it were….The earth there was covered by the bodies of the pious as they fell forward into death.

….I, Eucherius, have sent this written account of the passion of our martyrs…for I was afraid lest, through neglect, time should remove from the memory of men this account of so glorious a martyrdom….I have sought the truth of this very matter from suitable sources…from the holy Isaac, Bishop of Geneva, who had learned these things in turn from the most blessed Bishop Theodore, a man of an earlier time….I offer these writings of mine, if they are deemed worthy of support.”

The supposed relic bones of St. Maurice and others of the Theban martyrs are locked in a vault in the Abbey but are taken out once a year and are on display.—Sandra Sweeny Silver