“When evening came, Jesus was reclining at the table with the Twelve. And while they were eating, he said, “Truly I tell you, one of you will betray me.”

They were very sad and began to say to him one after the other, “Surely you don’t mean me, Lord?”

Jesus replied, “The one who has dipped his hand into the bowl with me will betray me. The Son of Man will go just as it is written about him. But woe to that man who betrays the Son of Man! It would be better for him if he had not been born.”

Then Judas, the one who would betray him, said, “Surely you don’t mean me, Rabbi?”

Jesus answered, “You have said so.”

While they were eating, Jesus took bread, and when he had given thanks, he broke it and gave it to his disciples, saying, “Take and eat; this is my body.” 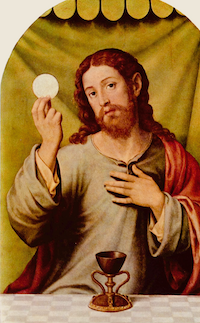 Then he took a cup, and when he had given thanks, he gave it to them, saying, “Drink from it, all of you. This is my blood of the covenant, which is poured out for many for the forgiveness of sins. I tell you, I will not drink from this fruit of the vine from now on until that day when I drink it new with you in my Father’s kingdom.”

The Holy Grail/Chalice is the cup Jesus supposedly used at His Last Supper with His Apostles. This 16th-century painting by Juan de Juanes (from Valencia, Spain) depicts the Chalice. 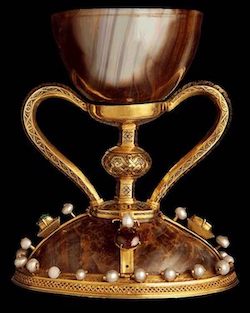 Since medieval times the small cup at the top of the chalice (right) has been thought to be the Cup Jesus used in the Last Supper with His Apostles. It, much modified and adorned with precious jewels,  is in the Spanish Cathedral in Valencia, Spain.

That Holy Chalice in Valencia is the ONLY one with a tiny shred of credibility. Most people and scholars call the Chalice, the “Holy Grail.” What does that mean and who called it that?

It must be said that the Early Church and for centuries after the Early Church into the Middle Ages there was SCANT MENTION OF REVERENCE FOR OR THE EXISTENCE OF THE CUP JESUS USED AT THE FIRST COMMUNION. 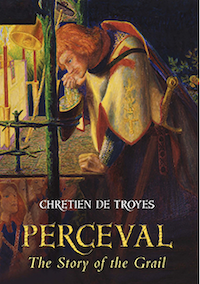 It was not finished by de Troyes, but over the next many decades 54,000 lines were added to his story of the Grail by different writers. de Troyes in his Percival, the Story of the Grail describes a serving dish (a golden grail), but he does not call it “holy.” Nonetheless, Chretien de Troyes started “the quest for the Holy Grail.”

The Holy Grail soon became associated with the legendary King Arthur. The poet Wace from the island of Jersey wrote in 1155 his Roman de Brut about the history of England. 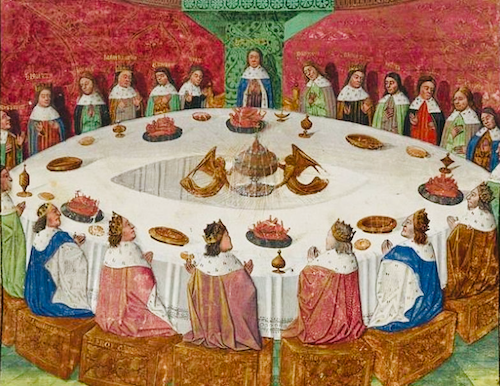 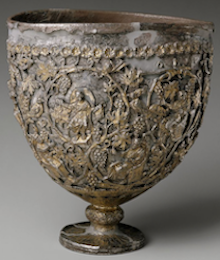 Many times over the centuries since Percival, the Story of the Grail was written, the Grail has been discovered. In the 1900’s it was “discovered” near England’s Glastonbury Abbey. The Antioch Chalice (c. 500-550) at the Metropolitan Museum in New York was on display at the World’s Fair in 1933-34 and toured the Louvre and other museums (left).

Scholars still seek the Holy Grail. The Kings of the Grail (1914) by Margarita Torres and Jose Miguel Ortega are sure the Holy Grail is inside the Basilica of San Isidoro in Leon, Spain.

This writer says, “Keep seeking. Keep up the illusive quest for the Cup, the Holy Grail. But keep knowing that the true treasure is found when one discovers Him,  “the pearl of great price.”

“Again, the kingdom of heaven is like a merchant seeking beautiful pearls, who, when he had found one pearl of great price, went and sold all that he had and bought it.”  (Mathew 13:45, 46)—Article by Sandra Sweeny Silver 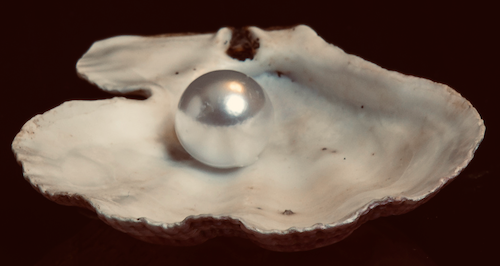