Pliny the Younger (61—c.113 AD), the Roman governor of Bithynia et Pontus (now in modern Turkey) wrote a letter to Roman Emperor Trajan c.112 AD and asked for counsel on dealing with the early Christians.

“It is my custom, Sir, to refer to you in all cases where I do not feel sure, for who can better direct my doubts or inform my ignorance? I have never been present at any legal examination of the Christians, and I do not know, therefore, what are the usual penalties passed upon them, or the limits of those penalties, or how searching an inquiry should be made. I have hesitated a great deal in considering whether any distinctions should be drawn according to the ages of the accused; whether the weak should be punished as severely as the more robust; whether if they renounce their faith they should be pardoned, or whether the man who has once been a Christian should gain nothing by recanting; whether the name itself, even though otherwise innocent of crime, should be punished, or only the crimes that gather round it. 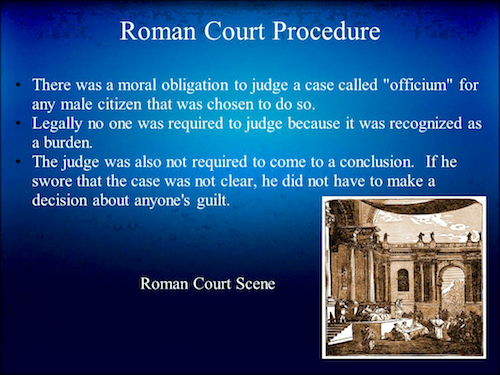 In the meantime, this is the plan which I have adopted in the case of those Christians who have been brought before me. I ask them whether they are Christians; if they say yes, then I repeat the question a second and a third time, warning them of the penalties it entails, and if they still persist, I order them to be taken away to prison until. the Roman governor arrived.”

“For I do not doubt that, whatever the character of the crime may be which they confess, their pertinacity and inflexible obstinacy certainly ought to be punished. There were others who showed similar mad folly whom I reserved to be sent to Rome, as they were Roman citizens. Subsequently, as is usually the way, the very fact of my taking up this question led to a great increase of accusations, and a variety of cases were brought before me. A pamphlet was issued anonymously, containing the names of a number of people. Those who denied that they were or had been Christians and called upon the gods in the usual formula, reciting the words after me, those who offered incense and wine before your image, which I had given orders to be brought forward for this purpose, together with the statues of the deities – all such I considered should be discharged, especially as they cursed the name of Christ, which, it is said, those who are really Christians cannot be induced to do. 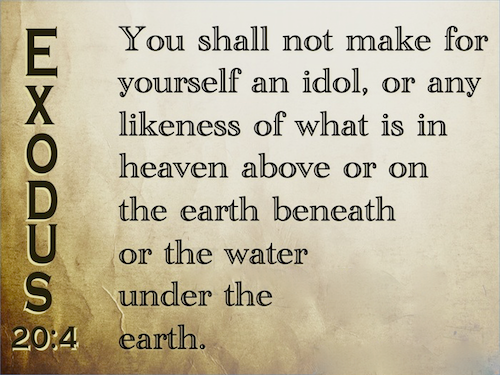 Others, whose names were given me by an informer, first said that they were Christians and afterwards denied it, declaring that they had been but were so no longer, some of them having recanted many years before, and more than one so long as twenty years back. They all worshipped your image and the statues of the deities, and cursed the name of Christ. But they declared that the sum of their guilt or their error only amounted to this, that on a stated day they had been accustomed to meet before daybreak and to recite a hymn among themselves to Christ, as though he were a god, and that so far from binding themselves by oath to commit any crime, their oath was to abstain from theft, robbery, adultery, and from breach of faith, and not to deny trust money placed in their keeping when called upon to deliver it. When this ceremony was concluded, it had been their custom to depart and meet again to take food, but it was of no special character and quite harmless, and they had ceased this practice after the edict in which, in accordance with your orders, I had forbidden all secret societies.”

The above bold/italic print in Pliny’/s letter is one of the earliest records we have of how, supposedly, very early Christians got together and worshipped.

“I thought it the more necessary, therefore, to find out what truth there was in these statements by submitting two women, who were called deaconesses, to the torture, but I found nothing but a debased superstition carried to great lengths. So I postponed my examination, and immediately consulted you. The matter seems to me worthy of your consideration, especially as there are so many people involved in the danger. Many persons of all ages, and of both sexes alike, are being brought into peril of their lives by their accusers, and the process will go on. For the contagion of this superstition (Christianity) has spread not only through the free cities, but into the villages and the rural districts, and yet it seems to me that it can be checked and set right. It is beyond doubt that the temples, which have been almost deserted, are beginning again to be thronged with worshippers, that the sacred rites which have for a long time been allowed to lapse are now being renewed, and that the food for the sacrificial victims is once more finding a sale, whereas, up to recently, a buyer was hardly to be found. From this it is easy to infer what vast numbers of people might be reclaimed, if only they were given an opportunity of repentance.”

Here we learn from the above bold/italic print that Christianity in c. 112 AD had penetrated well beyond the borders of Rome into many provinces south and east of Italy. Pagan temples had been deserted and large towns, villages and rural districts were teeming with Christian converts.

Trajan to Pliny in response to his letter about the Christians: 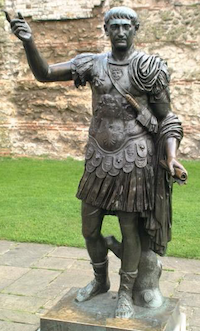 “You have adopted the proper course, my dear Pliny, in examining into the cases of those who have been denounced to you as Christians, for no hard and fast rule can be laid down to meet a question of such wide extent. The Christians are not to be hunted out ; if they are brought before you and the offence is proved, they are to be punished, but with this reservation – that if any one denies that he is a Christian and makes it clear that he is not, by offering prayers to our deities, then he is to be pardoned because of his recantation, however suspicious his past conduct may have been. But pamphlets published anonymously must not carry any weight whatever, no matter what the charge may be, for they are not only a precedent of the very worst type, but they are not in consonance with the spirit of our age.” 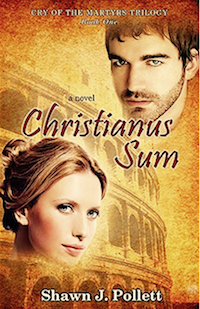 Because of Trajan’s tepid response to Christian “punishment” and because he did not pursue Christians, medieval theologians called him a “virtuous pagan.”

These letters were written in c. 112 AD when pagan Rome was still struggling with how to handle this popular Christian movement. But in the ensuing two centuries, when a governor or a judge sat in judgment on Christians, he asked, “Are you a Christian?” If the person said, “Christianus sum” (“I am a Christian”), he or she was set aside for capital punishment.—Article by Sandra Sweeny Silver