On March 30, 1920 a British soldier was digging a trench in Syria and uncovered the ancient city of Dura-Europos. Archeologists, including the famous historian/archeologist James Breasted, found one of the earliest synagogues and, most amazingly, the earliest Christian home church. The church/home is about 1,775 years old and dates to c. 241 AD. The worship center was in the lower level of the home and the owners apparently lived on the second level. It was not uncommon in the early days of the Christian faith for wealthy Christians to welcome believers into their homes for worship. The very idea of a church separate from private homes could exist only after Emperor Constantine’s 313 AD Edict of Milan that gave Christians their freedom to worship.

Dura, built on a cliff high above the Euphrates River, was in the early 3rd century a crossroads city between Damascus and Baghdad peopled with Greeks, Romans and Parthians. The Romans had conquered the city in c. 165 AD and used it as a military garrison and frontier post. The many temples to pagan gods from all over the ancient world, the Jewish synagogue and the Christian church all mingling side by side illustrate the city was cosmopolitan and tolerant. The wall paintings found in the Christian Church were perfectly preserved by the desert sands.

Because of the perfect preservation of the site’s buildings in the dry, arid desert, the archeologists dubbed Dura-Europos “the Pompeii of the desert.” There were many New Testament stories painted on the walls of the entrance to the home Church.

“And many were gathered together, so that there was no longer room, not even near the door; and He was speaking the word to them. And they came, bringing to Him a paralytic, carried by four men. Being unable to get to Him because of the crowd, they removed the roof above Him; and when they had dug an opening, they let down the pallet on which the paralytic was lying. And Jesus seeing their faith said to the paralytic, ‘Son, your sins are forgiven.’ But some of the scribes were sitting there and reasoning in their hearts, ‘Why does this man speak that way? He is blaspheming; who can forgive sins but God alone?’ Immediately Jesus, aware in His spirit that they were reasoning that way within themselves, said to them, ‘Why are you reasoning about these things in your hearts? Which is easier, to say to the paralytic, Your sins are forgiven; or to say, Get up, and pick up your pallet and walk? But so that you may know that the Son of Man has authority on earth to forgive sins—He said to the paralytic, ‘I say to you, get up, pick up your pallet and go home.’ And he got up and immediately picked up the pallet and went out in the sight of everyone, so that they were all amazed and were glorifying God, saying, ‘We have never seen anything like this.’” Mark 2:2-12

“Shortly before dawn Jesus went out to them, walking on the lake. When the disciples saw him walking on the lake, they were terrified. ‘It’s a ghost,’ they said, and cried out in fear. But Jesus immediately said to them: ‘Take courage! It is I. Don’t be afraid.’ ‘Lord, if it’s you,’ Peter replied, ‘tell me to come to you on the water.’ ‘Come,’ he said. Then Peter got down out of the boat, walked on the water and came toward Jesus. But when he saw the wind, he was afraid and, beginning to sink, cried out, ‘Lord, save me!’ Immediately Jesus reached out his hand and caught him. ‘You of little faith,’ he said, ‘why did you doubt?’ And when they climbed into the boat, the wind died down. Then those who were in the boat worshiped him, saying, ‘Truly you are the Son of God.’” Matt 14:25-32

Since the Syrian conflict began in 2011, no archeologist or specialist has visited Dura-Europos because it is controlled by ISIS. There has been concern over the site since the war began because ISIS has destroyed dozens of Jewish, Christian and pagan ancient sites and artifacts in its bloody climb to power. To ISIS, those antiquities are infidel idols. Now satellite pictures from Dura confirm the appearance of holes in the ground they speculate are from looters. Fortunately, most of the murals from the home church are in storage at Yale and the murals on the ancient synagogue reside in Damascus. But recent satellite photos show c. 1,000 new men at the site. Most believe they are from ISIS and will destroy the entire site.

“After the Sabbath, at dawn on the first day of the week, Mary Magdalene and the other Mary went to look at the tomb.There was a violent earthquake, for an angel of the Lord came down from heaven and, going to the tomb, rolled back the stone and sat on it. His appearance was like lightning, and his clothes were white as snow. The guards were so afraid of him that they shook and became like dead men.The angel said to the women, ‘Do not be afraid, for I know that you are looking for Jesus, who was crucified. He is not here; he has risen, just as he said. Come and see the place where he lay. Then go quickly and tell his disciples: He has risen from the dead and is going ahead of you into Galilee. There you will see him. Now I have told you.’ So the women hurried away from the tomb, afraid yet filled with joy, and ran to tell his disciples.” Matthew 28:1-8

Thousands of years ago Dura-Europos was a busy city on the crossroads between Damascus and Baghdad. Its discovery was an important addition to mankind’s collective heritage.—Sandra Sweeny Silver 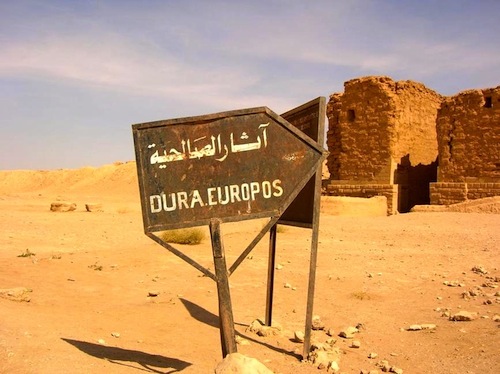