Nobody in extant literature took the symbol of Christ as the Big Fish further than Abercius, Bishop of Hieropolis. In c. 163 the 72-year-old Bishop journeyed to Rome and home again where he composed a sixteen-verse Epitaph for himself. In the epitaph he talks of eating the “fish of exceeding great size” along with “the choicest wine…mixed with bread.” His description of the Eucharist is hermetical, fanciful, gnostic and has provoked animated controversies:

“The citizen of an eminent city, this monument I made while still living,….My name is Abercius, the disciple of the Holy Shepherd Who feeds His flocks of sheep on the mountains and plains, who has great eyes that see everywhere….everywhere Faith was my guide and everywhere provided as my food the Fish of exceeding great size and pure whom the spotless virgin caught from the spring. And Faith ever gives this food to his disciples to eat, having the choicest wine and administering the mixed drink with bread….Let him who understands these words and believes the same pray for Abercius.”

Some think Abercius was the priest of a mother-goddess or of the mountain goddess Cybele. In 1895 A. Harnack, an eminent Biblical scholar, proffered Abercius as a religious syncretist. The likely truth is that Abercius is the man named Avircius Marcellus whom Eusebius mentions in his Church History 5.16 who wrote a treatise against the heretical Montanists. And the possible truth is that Abercius, like so many Christian intellectuals of his time who were bathed in allegories, symbols and mysticism, was writing an abstruse, orphic epitaph to be understood only by “him who understands these words.” Pectorius of Autun would have understood. June 24, 1839 a marble gravestone inscribed in Greek meter was discovered in the cemetery of St. Pierre l’Estrier at Autun in southern France:

“Divine race of the heavenly fish preserve a pure heart having received among mortals the immortal source of divine waters. Refresh, O friend, your soul with the ever-flowing waters of treasure-bestowing wisdom. Receive the sweet food of the Savior of the saints. Eat with delight holding the fish in your hands. Nourish with the fish, I pray, Master and Savior. Sweetly may mother slumber, I beseech You, Light of the dead. Ascandios father, beloved of my heart with sweet mother and my brothers in the peace of the fish, remember Pectorius.” Nothing is known of Pectorius.

Because of its paleographic characteristics, the tablet is dated c. 290. The first five lines in this Greek inscription begin with the Greek letters “I, CH, TH, U, S,” Ichthus, Fish, Christ. Pectorius closes his inscription “in the peace of the fish.” Clearly, the symbol of Christ as Ichthus, as the Fish was known in France as well as in Rome from earliest times.

Pectorius’ Inscription has, also, provoked controversy. He mentions “holding the fish in your hands” during the Lord’s Supper (also called Holy Communion and the Eucharist). The modern Eucharist (from the Greek eucharistia meaning “thanksgiving”) is composed of two elements, the bread and the wine, not of three elements. Mysticism, metaphor, reality? Or perhaps Pectorius meant that the bread and the wine together compose the Body of Christ, the Ichthus or that Christ/Ichthus is “present” at the Eucharist? What to make of Pectorius and Abercius? Certain it is that modern-day Christians who place stickers of a fish or of the word “ICHTHUS” on the bumpers of their cars or who wear a fish around their necks as a symbol of their faith are not thinking of Abercius and Pectorius. But the ancient acrostic and the symbol of Christ as Fish are powerful and have survived.

There are many frescoes in the catacombs connecting fish with the celebration of the Eucharist. In the Catacomb of Callixtus in the Cubicles of the Sacraments there is a unique representation of the imposito manum, the “laying on of hands,” the blessing of the Communion bread. A tripod/altar holds a loaf of bread and a fish. A man is laying his hands on the bread. A female on the right has her hands raised in praise. In modern days the laying on of hands still accompanies most celebrations of the Last Supper. 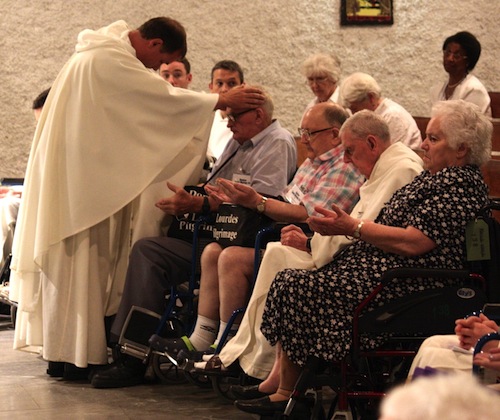 There is another tripod in the same Cubicle with bread on it and seven baskets full of bread on the floor. The most interesting fresco relating to Communion in Callixtus is in the Crypt of Lucina (c. 180). Two large fish face each other, each bearing on its back a wicker basket overflowing with loaves of bread. Each basket contains a cup of red wine hidden among the loaves. Bread, wine and fish, as metaphor or as a part of the early sacrament? All three were depicted on the table at early Christian Communions in catacomb art.

Jesus’ intimate association with fish/meals/the Eucharist is further illustrated in His third post-resurrection appearance to seven disciples by the Sea of Galilee. (John 21:1-14) The seven had been fishing all night but had caught nothing. As morning dawned, Jesus stood on the shore and called out to them, “Friends, haven’t you any fish?”

“No,” they answered. He said, “Throw your net on the right side of the boat and you will find some.” Some fishermen on the Lake used a dragnet hundreds of feet long, but Simon and the disciples were probably using a 55 square foot circular fishing net. They obeyed Jesus and caught 153 large fish.

John immediately said to Peter, “It is the Lord!” Peter impetuously jumped into the water, swimming to Jesus as the other disciples towed the net full of fish to the shore. When they all arrived: “…they saw a fire of burning coals there with fish on it and some bread….Jesus said to them, ‘Come and have breakfast.’ None of the disciples dared ask him, ‘Who are you?’ They knew it was the Lord. Jesus came, took the bread and gave it to them and did the same with the fish.” 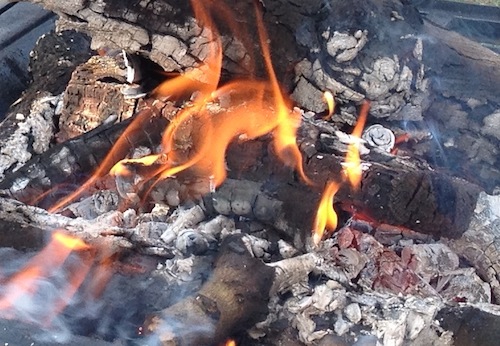 Rather than emphasize Jesus’ sacrifice on the cross as the Passover meal in the Upper Room did, this seaside breakfast obviously included the command to “go fish,” to evangelize. It included a miracle of fish, the fishermen, the Great Fisherman Himself, fish and bread. 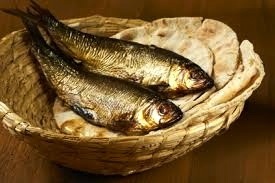 At Jesus’ first post-resurrection appearance to His Apostles, He showed them His hands and feet and tried to allay their astonishment and to demonstrate He was a body and not an apparition by asking, “‘Do you have anything here to eat?’ They gave him a piece of broiled fish, and he took it and ate it in their presence.” (Luke 24:40-42)

The eating of the fish convinced the Apostles that Jesus was alive again. Eating fish, meals of fish, miracles of fish. It is not totally enigmatic that the early Christians may have had fish on the Communion table and portrayed Jesus as the Ichthus, the Fish, the Christos. Even in Greek, the lingua franca of their world, His acrostic name was Fish.—Sandra Sweeny Silver