After Barnabas brought Paul, a converted Jew, to Antioch in c. 43 (Acts 11:19-26), the Good News of Jesus’ resurrection began to spread like wildfire throughout Gentile cities. Paul would travel constantly and intrepidly for c.25 years to make sure the major cities, ports and byways in his world knew that Jesus had resurrected from the dead and was the Jewish Messiah, the Christ in Greek. 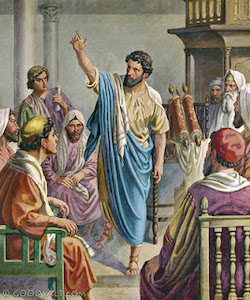 When Paul was in the synagogue in Pisidian Antioch “many of the Jews and devout converts to Judaism (Gentiles)” believed. (Acts 13:43) In Iconium “Paul and Barnabas went as usual into the Jewish synagogue. There they spoke so effectively that a great number of Jews and Gentiles believed.” (Acts 14:1) As Paul and Silas “traveled from town to town….the churches were strengthened in the faith and grew daily in numbers.” (Acts 16:4,5) When they came to Thessalonica: “As his custom was, Paul went into the synagogue and on three Sabbath days he reasoned with them from the Scriptures, explaining and proving that Christ had to suffer and rise from the dead.”

“This Jesus I am proclaiming to you is the Christ,” he said. Some of the Jews were persuaded and joined Paul and Silas as did a large number of God-fearing Greeks and not a few prominent women.” (Acts 17:1-4) In the synagogue at Berea “many of the Jews believed as did also a number of prominent Greek women and many men.” (Acts 17:12

“Prominent Greek women” were women who came from rich and influential families in the towns. Women, Jew and Gentile, were some of the most fervent and unwavering followers of Jesus from the beginning of His ministry into the early years of Christianity’s growth and continue to be so in our modern world. It can be extrapolated from Scripture that without the steady acceptance of the resurrected Christ by Gentile women and men worshiping in Jewish synagogues, the growth of the Early Church would not have been so rapid.

There was a proliferation of synagogues outside of Israel ever since the 700’s BC when Northern Israel was taken into captivity by the Assyrians. None of the ten northern tribes ever returned to Israel. In the late 500’s BC Judea in Southern Israel was taken into the Babylonian Captivity. Over the centuries, Jews from these diasporas and Jews, for business, family or personal reasons, were living in most of the cities and towns of the Roman Empire.

The Jewish philosopher Philo (below) of Alexandria (c. 20 BC—c. 50 AD), a contemporary of St. Paul, in his book Against Flaccus 45-47 writes of his fellow Jews: 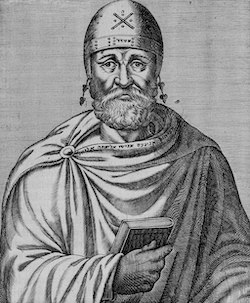 “For so populous are the Jews that no one country can hold them, and therefore they settle in very many of the most prosperous countries in Europe and Asia both in the islands and on the mainland, and while they hold the Holy City (Jerusalem) where stands the sacred Temple of the most high God to be their mother city, yet those which are there by inheritance from their fathers, grandfathers, and ancestors even farther back, are in each case accounted by them to be their fatherland in which they were born and reared, while to some of them they have come at the time of their foundation as immigrants to the satisfaction of the founders.”

Paul preached in Jewish synagogues in such diverse cities as Damascus, Antioch, Salamis, Pisidian Antioch, Iconium, Thessalonia, Berea, Athens, Corinth and Ephesus. The Jews were never shy about their belief in one God and about the holiness of their Scriptures. In the 1st century AD the entire Hellenized world knew the worship of one God was what distinguished the Jews from the rest of the pagan world. Their one God, their 10 Commandments and their hope for a coming Messiah attracted to Judaism many Gentiles from all walks of life who had recognized the folly of paganism. 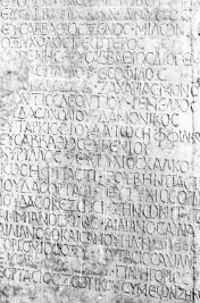 Gentile converts to Judaism were called “God-fearers” (theosebeis). They believed in Jehovah, the Law and the Prophets and they looked forward to the predicted Messiah. Some scholars had doubted the existence of a people the New Testament calls “God-fearers.” (Acts 10:2; 13:16). But a New York University team excavating in Aphrodisias, Turkey in 1976 found a 16’ high marble pillar (left), part of a Jewish memorial building or a synagogue built in the early 200’s, with two lists of names engraved on it. There were 69 Jewish names denoted ktistai or donors to the building and 54 Greek names under the phrase kai hosoi theosebeis meaning “and those who are God-fearers.”

These Gentile believers in Aphrodisias worshipped with the Jews and contributed financially to a building they considered theirs, also. It cannot be over-emphasized the role that Biblical archaeology, used as a hermeneutical tool, has not only confirmed Biblical assertions but has expanded and explained so many Old and New Testament passages. Over and over again archaeologists confirm the historical truths of the Bible. Dr. Yigael Yadin, the late Professor of Archaeology at Hebrew University, said his modus operandi was “to hold the Bible in one hand and a spade in the other” to find out what the ruins he was uncovering were and what they meant. 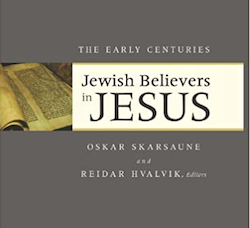 In the first 40 or so years of Christianity, the Jews’ synagogues and the Gentile women and men who worshipped with them—the “God-fearers”— were sprinkled all over the Roman world and were two of the main springboards for launching the news of the resurrected Jesus into the world.—Sandra Sweeny Silver