As far back as the Exodus c.1500-1450 BC, people always “washed their garments.” The most simple way for most ancient people, and some modern people, to have clean clothes was to wash their cloths in a river or if there was no river, to wash them in water.

By the time of the early Christians and Romans in the 1st centuries AD, people took their dirty garments to “fullers” (people who cleaned and restored clothes by washing, beating, combing and drying them for you). Most of the fullerys were owned by male or female slaves who had bought their freedom and employed the still-enslaved which was up to 50% of the Roman population. Slaves were, as Aristotle states in Politics 1.4 “living tools.”

Fullerys were nasty places because the garments were washed in human urine. The epigrammatist Marcus Valerius Martial spent some time on the smells, good and bad, of ancient Rome. When talking of a certain woman named Thais, Martial writes: 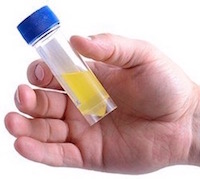 “Thais smells worse than the old urine-jar of a greedy fuller, just now broken in the middle of the street….or an amphora (jar) contaminated with putrid fish-paste.” Epigrams 6.93 Martial tells us how the fullers had a urine jar in front of their establishments for men to relieve themselves and how fowl that jar smelled.

The ancient use of urine not only as a cleaning agent but, also, as a panacea for almost all human ills is described by Pliny the Elder in Natural History 28:

“Urine is used for maladies of the eyes….sores, burns, diseases of the rectum, chaps upon the the body, stings inflicted by scorpions, itching, mad dog bites….Urine is also used for taking out ink spots. Male urine cures gout, witness the fullers for instance, who, for this reason, it is said, are never troubled with that disease.” To boot, urine was used to whiten teeth. [CLICK HERE for article on Pliny the Elder and the August, 79 AD eruption of Mt. Vesuvius]

What did the ancients, and especially the fullers, know about urine that has been lost to us? Urea in urine breaks down into ammonia, one of the most potent cleaning agents still on the market. Our household cleaners, however, usually contain only 5-10% ammonia. Our Dry Cleaners now use the toxic chemical solvent tetrachloroethylene, PERC. Interestingly, as late as March 3, 1821, thousands of years after the Romans, Thomas L. Jennings was the first African-American granted a US patent for his cleaning process called, “dry scouring,” the forerunner to modern dry cleaning. 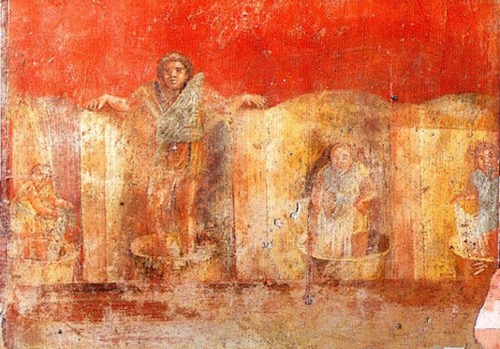 From ancient wall paintings, we can see how the fullers cleaned their wool, linen and cotton garments. First they had a vat or large tubs filled with urine. Then the slaves put the cloths in the tubs and stomped them down over and over with their feet until the cloth was clean. The man on the left in the painting above is removing a garment from the urine bath.

The Fullonica di Stephan’s (below) is one of six newly restored buildings in Pompeii open to the public. Stephen’s Fullery (Laundry/Dry Cleaners) had large tubs filled with urine, collected from the public toilets or from basins outside the Cleaners where men could relieve themselves.

In addition to urine as a cleaner, the ancient fullers discovered that a type of clay called “Fuller’s Earth” was very potent in removing olive oil, stains and dirt from clothing.

Fuller’s Earth, also, increased the whiteness of the cloth before or after its urine bath. It is still used today in the cosmetic industry, in paints and in absorbents for oil, grease, waste, etc. The United States is the largest producer of Fuller’s Earth.

Emperor Vespasian (ruled 69-79 AD) inherited a Rome that was going broke. He brought into the Treasury much-needed taxes. One novel, who-would-have-ever-imagined, tax was to charge people to use the public toilets. Vespasian then collected the urine and sold it to the dry cleaners who needed urine for their businesses. Interestingly enough, the public toilets of Rome are to this day called vespasiani after their “I’ll tax any and every thing, even urine” Emperor.

When one sees ancient reliefs of people/young children making wine by stomping their feet in vats filled with grapes, it reminds one of the fullers stomping cloths in vats of urine. 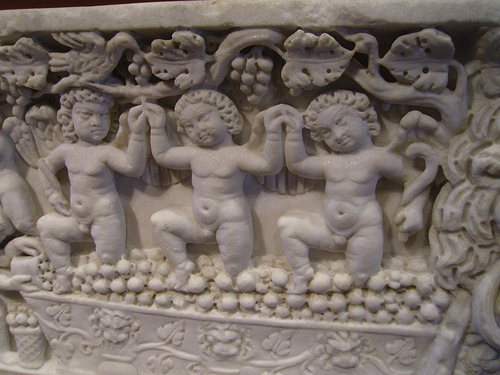 The ancients may have told this joke:
“Hey, Marcus, what’s the difference between a fuller and a vintner?
Gosh, Julius, I don’t know.
Well, then, Marcus, I’m sure not drinking wine at YOUR house.”—Sandra Sweeny Silver