The Colosseum, a symbol of modern Rome, was finished in 80 AD and became the main center for entertainment in Rome. It was built of travertine marble, is elliptically shaped and c. 1,729’ in circumference on a foundation of six acres. It has four stories and is c. 157’ high. On the top story was an enormous awning, the velarium that protected the spectators from the sun and inclement weather. It required 1,000 men to open and to close this 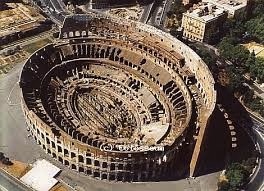 ingenious device. The four arches at the four axes of the building were the main entrances, but 76 other entrances provided easy access to the seats. Moderns calculate the seating capacity at 50,000. But the Chronographia of 354, written in 354, says the stadium held 87,000 spectators. 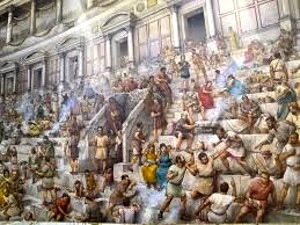 Admission to the Colosseum was generally free, but the plebs had to have a ticket, a tessare. They lined up the night before to get these coveted prizes. The pottery ticket was presented to the usher who indicated the seat. If a shard read “CVN II GRAD VI LOC IV,” it meant the ticket holder was in Section 2, Row 6, Seat 4. For the plebs the seats were wooden planks placed over the marble tiers. The senators and patricians had the choice cushioned seats at the bottom of the arena. Women and children were relegated to the highest tier far from the action.

And what action there was. Never before or since has the world seen the likes of the spectacles in the Colosseum. When the giant amphitheater was inaugurated by Emperor Titus in 80, there were one hundred days of events in the arena as a celebration. On opening day, 5,000 wild animals and 4,000 tame animals were “hunted” and killed by venatores, slaves trained to put on a good show before they slew the animals. These wild animal hunts in a contained area (Latin

venationes) had been going on for years before the Colosseum. They were originally held in the Circus Maximus, but often the cornered animals jumped into the stands and killed or mauled spectators. Even after a moat was dug around the Circus, the animals were not predictable. The arena of the Colosseum was designed so that no man or beast could vault, jump, crawl or claw his way to the spectators. Men and beasts were trapped. That was the point.

For wild animal hunts, the entire arena was landscaped to resemble a lush jungle. Lions, leopards, bears, wild boars, jaguars, panthers, ostriches, tigers, ibex, rhinos, wild sheep, elephants and any animal that was not tame and     was foreign and    unusual was captured, presented to the Roman people for their pleasure and then killed. Roman ships sailed to Africa and Asia to hunt exotic animals for the venationes. In addition to these animal hunts and slaughters, small dramas, music and poetry readings were performed in the Colosseum. But make no mistake about it. The Colosseum was built for blood. Tens of thousands of people and animals were killed in over three hundred years of active use. If one extends that number to the 250 amphitheaters built all over the Roman Empire, the number of the dead multiplies by thousands.

It is vital to remember that the pagan gods and the Emperor/god presided over and approved all of these activities. Every person murdered, every animal killed, every artifice and spectacle was sponsored by, dedicated to, and for the honor and pleasure of the pagan gods and their human god. At the beginning of each spectacle, the gods (e.g. Diana, Ceres, Apollo, Flora, Hercules, the Emperor) were acknowledged with great pomp and ceremony involving priests, priestesses, standards, banners, music and great festooned processions. Everything in a day at the Colosseum was cloaked in religious trappings. All eyes were, however, always on the arena.

“Arena” in Latin means “sand.” The Romans covered the area of the arena with sand in order to soak up the blood. We still use the Latin word for “sand” to designate the “central stage, ring or area used for sports or  other forms of entertainment surrounded by seats for spectators.” Blood-soaked sand was scooped up by slaves after every gore-imbrued spectacle and replaced with clean tan sand as if nothing had transpired. A typical day at the Colosseum began in the early morning. Often a lotteria or lottery was given. The Emperor or wealthy man who sponsored the lottery (Greek euergetes) had numbered pieces of parchment or pottery thrown into the stands. Those who grabbed them presented their number to the redemption booth and received their prize. Often the prizes were roasts of chicken or a pretty vase, but sometimes people hit the jackpot with gold and silver pieces, a piece of furniture, a horse or even an estate. The lottery excitement of never knowing but always hoping was the same as it is today and we have the ancient Romans to thank for that type of chancy game. 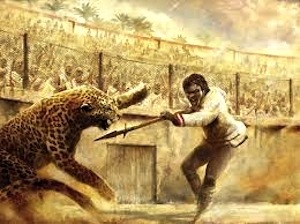 The venationes, the animal hunts were first after the musical procession to the gods. At noon, some spectators left for lunch, but most brought or bought lunch from the vendors who hawked their wares of sausages, pastries and wine all over the stadium as they do today. Prostitutes waited under the many arches of the amphitheater for customers. Our word “fornication” comes from the Latin word for “arches” (fornix). The origin and survival of the word “fornication” indicate the brisk trade carried on under the fornices for hundreds of years. Circus days were profitable for both vendor and fornicator.

Midday was, also, the time when criminals were executed. Public execution was done in order to warn the spectators against committing any of these acts. Murderers, arsonists and Christians were thrown to wild beasts (damnatio ad bestias) or made to fight each other as impromptu gladiators. Often they were beheaded, crucified or burned alive by dipping a tunic, called a tunica molesta, in a naphtha-soaked substance and setting it on fire.

The Christians were grouped with other criminals because they were guilty of atheism. An atheist is usually defined as a person who does not believe there is a god. But atheists to the Romans were those who did not believe in or would not acknowledge their gods or their Emperor as a god. Christians had no images or idols to worship and performed no outward sacrifices. Their internal rather than external worship of God was totally incomprehensible to pagans. Rome was a syncretic society that had accepted all the gods and goddesses their conquered people held sacred. Yet the Christian god was not only an affront to them but was a threat to society and to their gods because Christian atheism was a belief in only one god who repudiated all other gods and idols as false and demonic. That was a capital crime.

The Stoic philosopher Seneca (4 BC-65 AD) went to the Colosseum one noonday to see what was going on. In a letter to his friend Lucilius he wrote:

“The other day I chanced to drop in at the midday games, expecting sport and wit and some relaxation to rest men’s eyes from the sight of human blood. Just the opposite was the case. Any fighting before that was as nothing. All trifles were now put aside. It              was plain butchery. The men had nothing to protect them. Their whole bodies were open to the thrust, and every thrust told. The common people prefer this to matches on level terms or request performances. Of course they do. The blade is not parried by helmet or shield, and what use is skill or defense? All these merely postpone death. In the morning men are thrown to bears or lions, at midday to those who were previously watching them. The crowd cries for the killers to be paired with those who will kill them and reserves the victor for yet another death. This is the only release the faux gladiators have. The whole business needs fire and steel to urge men on to fight. There was no escape for them. The slayer was kept fighting until he could be slain. ‘Kill him! Flog him! Burn him alive!’ The spectators roared. ‘Why is he such a coward? Why won’t he rush on the steel? Why does he fall so meekly? Why won’t he die willingly?’ Unhappy as I am, how have I deserved that I must look on such a scene as this? Do not, my Lucilius, attend the games, I pray you. Either you will be corrupted by the multitude, or, if you show disgust, be hated by them. So stay away!” Epistles 7

The prudish and shocked attitude of Seneca at the high noon killing of Christians and criminals is disingenuous: “How have I deserved that I must look on such a scene as this?” Seneca was a licentious man who was exiled for committing adultery with Emperor Caligula’s young niece. He served with wile and guile the crazy Caligula, the quixotic Claudius and the evil Nero. He had even been Nero’s tutor. He had seen many people killed or forced to commit suicide by those emperors. He had lived in Rome for years and was conversant with the lifestyles of the rich and famous. It was not, to be sure, the first time Seneca had wended his way to that amphitheater. To pretend offense at what he saw at the Colosseum was pretentious and self-serving. 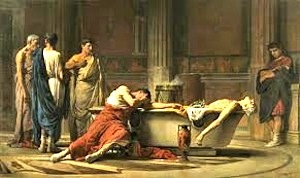 Later, Nero forced his tutor Seneca to kill himself by opening his veins. The blood wouldn’t flow out and Seneca was in pain. He drank poison but it did not work. Finally, he threw himself into a hot bath and died of suffocation from the steam. (Tacitus in Annals 15 describes his death scene.)

The 2nd century Christian apologist Tertullian was of a judicial and more refined state of mind than Seneca. After his mid-life conversion to Christianity, he was disgusted by the games, gods and events represented in Roman arts and arenas. As a young man he had loved to go to the amphitheaters and watch people die. But one of the things that impressed him over the years and led finally to his conversion was the WAY Christians died, with dignity and with prayer and with their hands raised to God. One of his classic arguments against Rome’s persecution of Christians and their God was the Roman’s obvious contempt for their own gods: 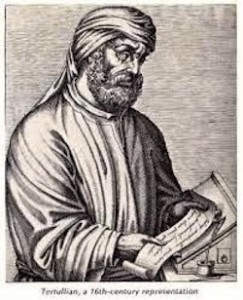 “Other of your (Roman) writers, in their wantonness, even minister to your pleasures by vilifying (your) gods. Examine those charming farces of your Lentuli and Hostilii where in the jokes and the tricks it is your…deities which afford you Romans merriment….Your dramatic literature, too, depicts all the vileness of your gods. The Sun (Apollo) mourns his offspring (Phaeton) cast down from heaven and you (Romans) are full of glee; Cybele (a mother goddess) sighs after the scornful swain (her son/paramour Attis who castrated himself), and you do not blush….When the likeness of a god is put on the head of an infamous wretch, when one impure and trained up for the art in all effeminacy represents a Minerva or a Hercules, is not the majesty of your gods insulted and their deity dishonored? Yet you not merely look on, but applaud. You are, I suppose, more devout in the (Colosseum), where after the same fashion your deities dance on human blood, on the pollutions caused by inflicted punishments, as they act their themes and stories, doing their turn for the wretched criminals, except that these too often put on divinity and actually play the very gods….we must explain all these things by the contempt in which (your) gods are held by those who actually do these things and by those for whose enjoyment they are done.” Apology 15—Article by Sandra Sweeny Silver

CLICK HERE to see article on mock Naval battles in the Colosseum.

A 10 minute History Channel video on the Colosseum.