“When Jesus saw the crowd around him, he gave orders to cross to the other side of the lake. Then a teacher of the law came to him and said, ‘Teacher, I will follow you wherever you go.’ Jesus replied, ‘Foxes have dens and birds have nests, but the Son of Man has no place to lay his head.’ Another disciple said to him, ‘Lord, first let me go and bury my father.’ But Jesus told him, ‘Follow me, and let the dead bury their own dead.’ Then he got into the boat and his disciples followed him. 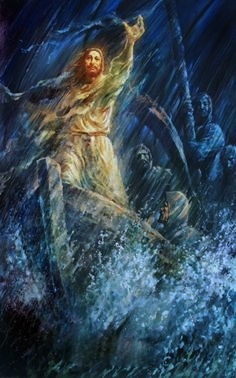 storm came up on the lake, so that the waves swept over the boat. But Jesus was sleeping. The disciples went and woke him, saying, ‘Lord, save us! We’re going to drown!’ He replied, ‘You of little faith, why are you so afraid?’ Then he got up and rebuked the winds and the waves, and it was completely calm. The men were amazed and asked, ‘What kind of man is this? Even the winds and the waves obey him!’ When he arrived at the other side in the region of the Gadarenes, two demon-possessed men coming from the tombs met him. They were so violent that no one could pass that way.  ‘What do you want with us, Son of God?’ they shouted. ‘Have you come here to torture us before the appointed time?’ Some distance from them a large herd of pigs was feeding. The demons begged Jesus, ‘If you drive us out, send us into the herd of pigs.’ He said to them, ‘Go!’ So they came out and went into the pigs, and the whole herd rushed down the steep bank into the lake and died in the water. Those tending the pigs ran off, went into the town and reported all this, including what had happened to the demon-possessed men. Then the whole town went out to meet Jesus. And when they saw him, they pleaded with him to leave their region. Jesus stepped into a boat, crossed over and came to his own town.” Matthew 8:18-9:1

The story of Jesus calming the storm is told in the three Synoptic Gospels, Matthew, Mark, and Luke. This day in Jesus’ life is taken only from the Gospel of Matthew. This day begins with Jesus out and about and the crowds are pressing in and begging Him for this or that. He needs a rest and tells some of His disciples that He wants to go across the Sea of Galilee. As they are getting into the boat, a man who was highly skilled in Biblical law comes to Him and says he will follow Jesus wherever He goes. He wants to be a full-time disciple, but Jesus demurs and tells him He is a vagabond with no place to sleep. Another man who followed Jesus closely tells Jesus he cannot go with Him at this time because his father has died and he has to bury him. Jesus chides him and says, “Let the dead bury their own dead.” Jesus never minces words and these are two excellent examples of His succinctness. 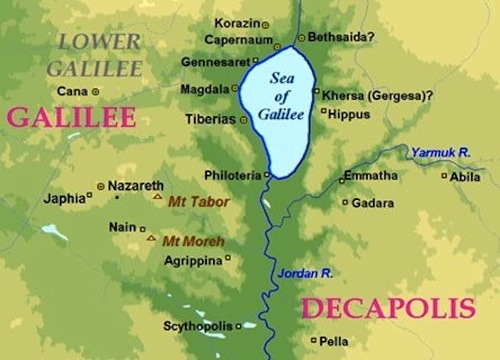 Jesus enters the boat with his disciples following. He promptly falls asleep. He is exhausted physically. The Sea of Galilee is 13 miles long, 8 miles wide and has a circumference of 33 miles. It is the second lowest lake on earth (the Dead Sea is the first) and storms come up quickly. The disciples who were mainly fisherman had negotiated many storms on the Sea but this storm was different. It was filling the boat with water and the disciples were afraid for their lives. They awaken Jesus yelling at him that they were all going to drown.

Jesus gets up, assesses the situation and yells at them for having such little faith and being so afraid. Didn’t they know that nothing could happen to them as long as they were with Jesus? He rebukes the fury of the winds and waves and it becomes totally calm. The disciples are flabbergasted and cry out, “What kind of man is this? Even the winds and the waves obey him!” They had seen Him perform many miracles on humans, but this was different. He had control of Nature, too. Who REALLY was their rabbi, this Jesus?

They come to the other side of the Lake in the Hellenistic region of the Gadarenes (Gergesa). Two men who were possessed with and tortured by demons lived in the nearby caves where the dead were entombed. They were so violent and out of control people could not come near them or they would attack them. But the demons in them knew immediately who Jesus was. The men came running to Him yelling, “What do you want with us, Son of God?”

The demons knew Jesus drove them out of people and begged Him to let them enter a herd of pigs who were grazing nearby. He allowed the demons to enter the pigs and the whole herd went crazy and ran over a cliff into the Sea and died. The keepers of the herd ran into town and told everyone that Jesus had cast the many demons out of the the two possessed men, but the demons had entered their herd of  pigs and the pigs drowned. This Man had threatened their livelihood. They were Gentiles because Jews were forbidden to eat let alone keep pigs. The entire small town came out and begged Jesus to leave their territory.

That day in Matthew ends with Jesus stepping into the boat, crossing the Sea of Galilee again and going into his adopted hometown of Capernaum. No rest for the weary Messiah.—Sandra Sweeny Silver