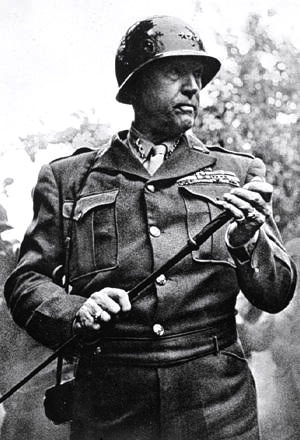 “For this guy, faith was part of his being,” he said in an interview. “If you ignore Patton’s Christianity, then you cannot understand how he approached challenges or how he achieved his successes, or how he shaped history,” Keane said. “He was raised reading the Bible, praying every day….His faith in God and his faith in

himself became this core,” he said. “You can’t find a page or entry in his diary with him not giving thanks to God or asking for God’s help when he is being challenged or writing a prayer himself—it is amazing how intense his personal devotion is,” he said.

“Patton’s most famous prayer, an incident portrayed in detail in the movie Patton, was the one he ordered the Third Army chaplain Msgr. James H. O’Neill to write in early December 1944, as rains were bogging down the army’s progress. O’Neill wrote a prayer that he assumed was for the general’s private devotion, but Patton ordered it sent to every soldier under his command. The prayer was printed on cards with Patton’s Christmas greeting on the other side, and it was out to most of the troops by the middle of December—right before the Germans launched the Battle of the Bulge (December 16, 1944 -January 25, 1945).”

5 minute video of footage from the Battle of the Bulge. 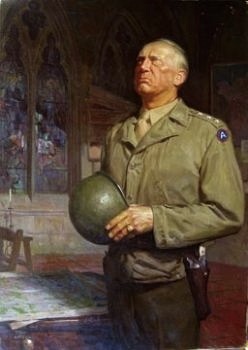 “The movie is great, obviously, but it tends to see Patton as a bit of a caricature, and the same thing for that prayer,” Keane said. Keane said he researched the prayer thoroughly to fully understand what it was all about. “It wasn’t just a gimmick to him. What you start to understand is that Patton saw prayer as a force, a force of nature, a force of God, really, not just some words uttered. He thought that everyone praying together was like a force field, like an X-Ray, you couldn’t see it, but it could shape and affect things, with a power unto itself,” he said. “That’s why he had the whole Third Army pray and issue a directive on prayer because he thought it would help them accomplish their mission,” he said.

And prayer DOES affect matter….