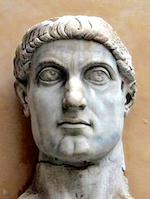 One of the most important things the Christian Emperor Constantine (left—reigned 306 to 337 AD) did was to commission in 331 the writing of 50 Bibles for the Church in his new capital in the East called Byzantium (which name would in the 400’s be changed to Constantinople which name would be changed to Istanbul in 1930 when modern Turkey was established).

These Bibles, like most early Christian Bibles, were written on leaves of vellum stitched and bound together (called a codex) creating a facsimile of a modern book. It is surmised, but not proven, that the two oldest Greek Bibles extant, the Codex Vaticanus and the Codex Sinaiticus, both of which were written in the 300’s (c. 200 years after the New Testament was written), are two of those Bibles commissioned by Emperor Constantine. 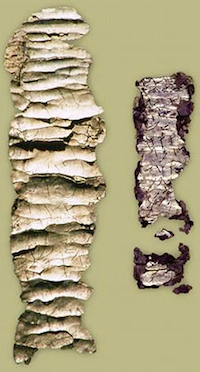 There is no other fragment in all of ancient history’s writings with such a provenance. The papyrus is written in bold Greek on both sides which means it was a codex (a book). One side is a text from John 18:31-33. The other side of the fragment is from John 18:37-38. The Greek text of John 18: 31-33 and the English translation reads:

The Jews said to him, “It is not lawful for us to put anyone to death.” This was to fulfill the word that Jesus had spoken to show by what kind of death he was going to die. So Pilate entered his headquarters again and called Jesus and said to him, “Are you the King of the Jews?”

On the other side of the Greek fragment is John 18:37-38 translated into English:

Jesus answered, “A King I am. For this purpose I was born and for this purpose I have come into the world—to bear witness to the truth. Everyone who is of the truth listens to my voice.” Pilate said to him, “What is truth?” After he had said this, he went back outside to the Jews and told them, “I find no guilt in him.”

There are c. 5,600 copies of the New Testament extant. 99.5% more than for any other ancient writing or book. In addition, there are over 19,000 copies in the Syriac, Latin, Coptic and Aramaic languages. The total supporting New Testament manuscript base is over 24,000. With this many ancient/medieval New Testaments available one can be assured that what one reads is 97% accurate to the originals. The Bible (Old Testament and New Testament) outstrips every other ancient manuscript in sheer numbers and in the dates of composition from the time of its original writing. 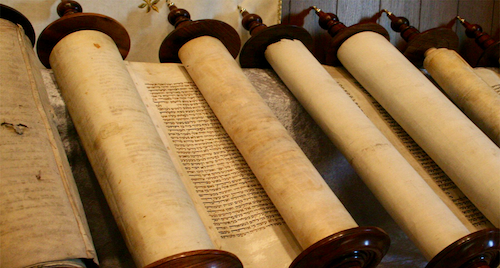 It is instructive to plumb the dates of the original writings of revered ancients and examine what ancient manuscript evidence we have of them.

PLATO (born c. 427 in Athens, Greece) is one of the foundational pre-Christian philosophers, a wise man. He is, also, one of the Fathers of Philosophy. Some of the earliest evidence of his writings are:

Papyrus Oxyrhynchus 228 — a fragment from his Laches, a dialogue of Plato, written in Greek. It was discovered in Oxyrhynchus, Egypt. The manuscript was written on papyrus in the form of a roll. It is dated to the second century, some 500 years or so after its composition. It is housed in the Bodleian Library in Oxford, England.

Papyrus Oxyrhynchus 229 — is a fragment of the Phaedo, a dialogue by Plato, written in Greek on papyrus. It is dated to the second or third century (some 500 to 600 years after its composition). Currently it is housed in the British Library in London.

HERODOTUS (c.485—c 425 BC)— Called The Father Of History, was a Greek historian known for having written The Histories in c. 440 BC. Examples of some of the earliest references to his work:

Manuscript evidence skips about 700 years until the Medieval Ages.

In the 3rd century (c. 400 AD) over 300 years after Pliny Elder wrote his book, an abstract of the geographical portions of Pliny’s work was produced by Solinus, a Roman grammarian and compiler.

Early in the 8th century, Bede aka Venerable Bede ( 672—May 26, 735 AD) had access to a partial manuscript which he used in his De Rerum Natura.

There are about 200 extant manuscripts. A cherished one is at Bamberg State Library, but contains only books XXXII–XXXVII.

Pliny the Elder’s book was one of the first classical manuscripts to be printed in Venice in 1469 by Johann and Wendelin of Speyer, but J.F. Healy, a recent scholar, described the translation as “distinctly imperfect”.

TACITUS— Of the fourteen books of the Histories of Tacitus (c. 1OO AD) only four and a half survive; of the sixteen books of his Annals, ten survive in full and two in part. The text of these extant portions of his two great historical works depends entirely on two MSS, one from the 9th century and one from the 11th century—all of his works rely on medieval manuscripts.

Caesar’s Gallic Wars was written in the first century B.C. 10 manuscripts are in existence. The earliest textual evidences we have are from the 9th through the 11th centuries AD, obviously copied 1,000 years after the original.

Aristotle’s Poetics was written in the fourth century B.C. There are only 5 manuscripts in existence. The earliest textual evidence we have was copied 1,400 years after the original.