After the Edict of Milan in 313 AD, giving Christians the right to worship Christ, Christian symbols started to appear openly on many objects. Until the Edict, Christians had worshipped in secret and displayed their symbols in the underground Catacombs.

Anchors resemble a cross. An anchor is “a heavy object attached to a rope or chain and used to moor a vessel to the sea bottom.”

CLICK HERE for article on Anchor As Christian Symbol

Paul cleverly uses the anchor simile as the Hope a Christian has in Christ:

“God did this so that, by two unchangeable things in which it is impossible for God to lie, we who have fled to take hold of the hope set before us may be greatly encouraged. We have this hope as an anchor for the soul, firm and secure.” Hebrews 6:18,19

On this marble plaque (above) there is the further reference to Christ as Ichthus, the Big Fish and the symbol of Him as the Fisherman of men.

CLICK HERE  for article on Ichthus, the Fish Symbol

A very early Anglo-Saxon grave (c. 650 AD) was found near Cambridge, England (see below). It contained the skeleton of a teenage girl lying on a wooden bed. On her chest was a gold and garnet cross to symbolize she was a Christian. 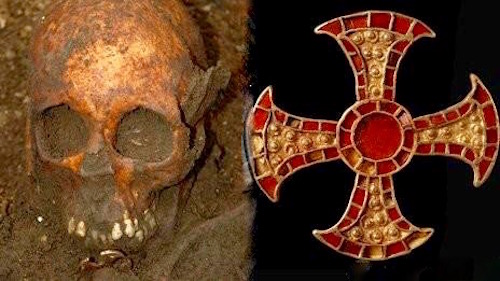 It is said in some ancient accounts and legends that Joseph of Arimathea (1st century AD) was the first person to bring the news of the Resurrected Christ to Britain. We know there were Christians in Scotland and Wales in the 500’s AD. Many claim England was Christianized by Augustine of Canterbury in 597. However, it could be that traders, merchants, soldiers had brought the Good News to Britain in the early centuries after the Resurrection.

The staurogram is a monogram: “a motif made by overlapping or combining two or more letters or other graphemes to form one symbol.” The staurogram on the left is composed of two Greek letters superimposed over each other: the tau (written t) and the rho (written p). This staurogram morphs the Tau (as a cross) and the Rho (written P).

From the Catacombs of Domitilla (below) this early 2nd century Christian symbol of the dove from Noah’s Ark returning to the Ark with an olive branch in its mouth symbolizes “that which was dead has returned to life again.” It is a symbol of the resurrection of the dead in Christ. The olive branch, also, symbolizes “victory over death.” 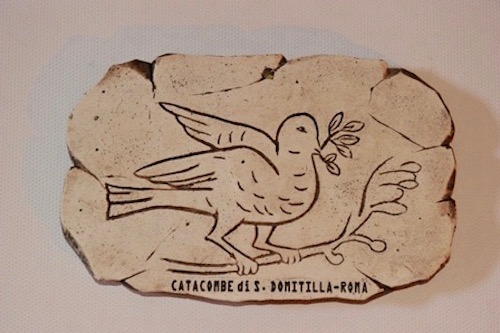 “When the dove returned to him in the evening, there in its beak was a freshly plucked olive leaf! Then Noah knew that the water had receded from the earth.” Genesis 8:11— Article by Sandra Sweeny Silver