Cornelius Tacitus (c. 56 AD – 117 AD) was considered one of the greatest historians of the ancient Roman Empire. In his book entitled Histories, Tacitus details the history of the Exodus as a factual event and of Moses as the leader of the Jews:

Tacitus begins: “Most authorities, however, agree on the following account. The whole of Egypt was once plagued by a wasting disease which caused bodily disfigurement. So pharaoh Bocchoris went to the oracle of Hammon (Ammon) to ask for a cure, and was told to purify his kingdom by expelling the victims to other lands, as they lay under a divine curse.”

Exodus 12:31,32 “During the night Pharaoh summoned Moses and Aaron and said, ‘Up! Leave my people, you and the Israelites! Go, worship the Lord as you have requested. Take your flocks and herds, as you have said, and go. And also bless me.’” 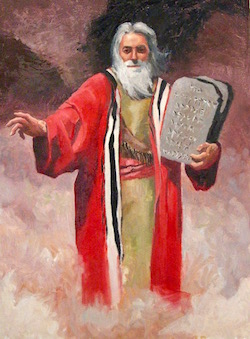 Tacitus continues: “Thus a multitude of sufferers was rounded up, herded together, and abandoned in the wilderness. Here the exiles tearfully resigned themselves to their fate. But one of them, who was called Moses, (Exodus 12) urged his companions not to wait passively for help from god or man, for both had deserted them: he said they should trust to their own initiative and to whatever guidance first helped them to extricate themselves from their present plight. They agreed, and started off at random into the unknown. But exhaustion set in, chiefly through lack of water, and the level plain was already strewn with the bodies of those who had collapsed and were at their last gasp when a herd of wild asses left their pasture and made for the spade of a wooded crag. Moses followed them and was able to bring to light a number of abundant channels of water whose presence he had deduced from a grassy patch of ground. This relieved their thirst.”

Exodus 17:5,6 “Then the LORD said to Moses, ‘Pass before the people and take with you some of the elders of Israel; and take in your hand your staff with which you struck the Nile, and go, Behold I will stand before you there on the rock at Horeb; and you shall strike the rock, and water will come out of it, that the people may drink.’ And Moses did so in the sight of the elders of Israel.”

Tacitus: “They traveled on for six days without a break, and on the seventh they expelled the previous inhabitants of Canaan (Joshua 6), took over their lands and in them built a holy city and temple.” 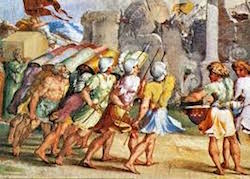 African-American slaves composed Joshua Fit The Battle Of Jericho in the 1800’s:

Tacitus continues: “In order to secure the allegiance of his people in the future, Moses prescribed for them a novel religion quite different from those of the rest of mankind (One God versus many gods). 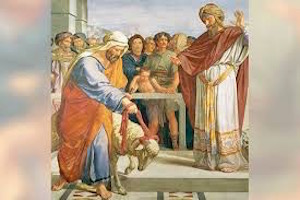 Among the Jews all things are profane that we hold sacred; on the other hand they regard as permissible what seems to us immoral. In the innermost part of the Temple, they consecrated an image of the animal which had delivered them from their wandering and thirst, choosing a ram as beast of sacrifice to demonstrate, so it seems, their contempt for Hammon (Egyptian god Ammon).

The bull is also offered up, because the Egyptians worship it as Apis. They avoid eating pork in memory of their tribulations (Deuteronomy 14:8), as they themselves were once infected with the disease to which this creature is subject. They still fast frequently as an admission of the hunger they once endured so long, and to symbolize their hurried meal the bread eaten by the Jews is unleavened.” 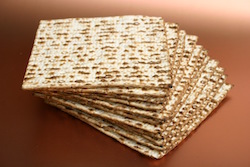 Exodus 12:39 “With the dough the Israelites had brought from Egypt, they baked loaves of unleavened bread. The dough was without yeast because they had been driven out of Egypt and did not have time to prepare food for themselves.”

“We are told that the seventh day was set aside for rest because this marked the end of their toils.”

Tacitus continues: “In course of time the seductions of idleness made them devote every seventh year to indolence as well. (Leviticus 20:8-11 allowing the land to rest) Others say that this is a mark of respect to Saturn, either because they owe the basic principles of their religion to the Idaei (corruption of word Israel? or the Idaei were primordial figures on Mt. Ida who nursed and brought up Jupiter) who, we are told, were expelled in the company of Saturn and became the founders of the Jewish race, or because, among the seven stars that rule mankind, the one that describes the highest orbit and exerts the greatest influence is Saturn. A further argument is that most of the heavenly bodies complete their path and revolutions in multiples of seven.

Whatever their origin, these observances are sanctioned by their antiquity. The other practices of the Jews are sinister and revolting, and have entrenched themselves by their very wickedness. Wretches of the most abandoned kind who had no use for the religion of their fathers took to contributing dues and free-will offerings to swell the Jewish exchequer; and other reasons for their increasing wealth may be found in their stubborn loyalty and ready benevolence towards brother Jews. But the rest of the world they confront with the hatred reserved for enemies. They will not feed or intermarry with gentiles. Though a most lascivious people, the Jews avoid sexual intercourse with women of alien race (Deuteronomy 7:3). Among themselves nothing is barred. They have introduced the practice of circumcision to show that they are different from others (Genesis 17:9-14).

CLICK HERE for Circumcision In The Ancient World article.

Proselytes to Jewry adopt the same practices, and the very first lesson they learn is to despise the (pagan) gods, shed all feelings of patriotism, and consider parents, children and brothers as readily expendable. However, the Jews see to it that their numbers increase. It is a deadly sin to kill an unwanted child, and they think that eternal life is granted to those who die in battle or execution – hence their eagerness to have children, and their contempt for death. Rather than cremate their dead, they prefer to bury them in imitation of the Egyptian fashion, and they have the same concern and beliefs about the world below.

Exodus 13:19 “Moses took the bones of Joseph with him (when they left Egypt) because Joseph had made the Israelites swear an oath. He had said, ‘God will surely come to your aid, and then you must carry my bones up with you from this place.’”

But their conception of heavenly things is quite different. The Egyptians worship a variety of animals and half-human, half-bestial forms, whereas the Jewish religion is a purely spiritual monotheism. They hold it to be impious to make idols of perishable materials in the likeness of man: for them, the Most High and Eternal cannot be portrayed by human hands and will never pass away. For this reason they erect no images in their cities, still less in their temples.”

Exodus 20:3-6 “You shall have no other gods before me. You shall not make for yourself a carved image, or any likeness of anything that is in heaven above, or that is in the earth beneath, or that is in the water under the earth. You shall not bow down to them or serve them, for I the Lord your God am a jealous God, visiting the iniquity of the fathers on the children to the third and the fourth generation of those who hate me, but showing steadfast love to thousands of those who love me and keep my commandments.” 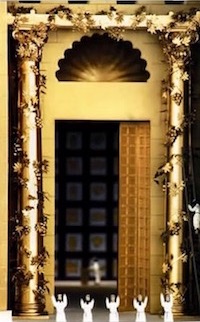 Tacitus continues: “Their kings are not so flattered, the Roman emperors not so honored (Jews allowed no images of their rulers or of Roman emperors in their Temple or city.). However, their priests used to perform their chants to the flute and drums, crowned with ivy, and a golden vine was discovered in the Temple (left).

And this has led some to imagine that the god thus worshipped was Prince Liber, the conqueror of the East. But the two cults are diametrically opposed. Liber founded a festive and happy cult: the Jewish belief is paradoxical and degraded.” Tacitus, Histories 5.2-5

Tacitus’ Histories does not always correspond with the history of Moses and the Exodus from Egypt given in the Bible. But he does report short sentences of the truth about the Jews, about a terrible plague that ousted them from Egypt (the Exodus), the wandering in the Wilderness under the leadership of a man named Moses and some of the beliefs and practices of the Jews—all of which are corroborated by Scripture. Tacitus is an important extra-Biblical witness for the authenticity of the Bible and of one of the pillars of the Old Testament, Moses. Tacitus was very prejudiced against the Jews as were most ancients who did not grasp their monotheism and were threatened by their separatism and the Jews’ zeal for their one God and their Temple.—Sandra Sweeny Silver