It must be explicitly stated that the habit of the ancient Greeks, Romans and Jews was to drink wine mingled with water, called “mingled wine.” Romans, following the Greek tradition, considered it barbaric and provincial to drink undiluted wine. Even though they had a profitable trade exchanging wine for slaves with Gaul (France and environs), the Romans looked down on the Gauls as a besotted people because they drank their wine undiluted. The Romans mixed one part wine to two parts water. The Greeks diluted their wine with three-four parts water.

Jewish rabbis would not bless wine that was not mingled with water. The earliest Christians were Jews so one can assume they drank mingled wine. Some rabbis thought the wine should be three parts water to one part wine. Other rabbis demanded ten parts water to one part wine. The Talmud (Shabbath 77a) says that wine that does not have at least three parts of water is not wine. The uninspired apocryphal II Maccabees 15:39 gives a reason for mingled wine. Wine by itself could lead to drunkenness and water by itself could be polluted so wine mingled into water could kill bacteria: “For as it is hurtful to drink wine or water alone; and as wine mingled with water is pleasant, and delighteth the taste: even so speech finely framed delighteth the ears of them that read the story.” When the earliest Christians participated in the Eucharist, they drank wine mingled with/diluted with water.

Did many ancients like the French drink undiluted wine? Of course they did. There are numerous prohibitions in the Bible and ancient secular literature against drunkenness. Ephesians 5:18 states: “Do not get drunk on wine, which leads to debauchery.” But wasn’t Jesus’ first recorded miracle the one where He turned water into wine at a wedding in Cana? (John 2:1-11) Yes, but did the water become undiluted wine or was it diluted-with-water wine? Only asking.

Wasn’t the charge leveled against Jesus that He was unrestrained in His eating habits and that He was a drunkard? Jesus said, “The Son of Man came eating and drinking and you say, ‘Here is a glutton and a drunkard, a friend of tax collectors and sinners.’” (Luke 7:34) The Greek word for “drunkard” in that passage is oinopotes meaning “wine drinker, wine-bibber.” So did Jesus ever drink undiluted wine. Perhaps. Perhaps not. One thing is for sure—Jesus was not a glutton, nor was He ever drunk.

Cyprian, Bishop of Carthage, was an early Christian writer whose works are still extant and studied. He was born c. 200 and was beheaded for Christ on September 14, 258.  An heretical splinter group at the time believed only water should be used at the Eucharist. Cyprian, a trial lawyer and teacher of rhetoric, wrote the following about wine used in Christian Communion:

“For because Christ bore us all, in that He also bore our sins, we see that in the water is understood the people, but in the wine is shown the blood of Christ. But when the water is mingled in the cup with wine, the people are made one with Christ, and the assembly of believers is associated and conjoined with Him on whom it believes; which association and conjunction of water and wine is so mingled in the Lord’s cup, that that mixture cannot any more be separated….Thus the cup of the Lord is not indeed water alone, nor wine alone, unless each be mingled with the other; just as, on the other hand, the body of the Lord cannot be flour alone or water alone, unless both should be united and joined together and compacted in the mass of one bread; in which very sacrament our people are shown to be made one, so that in like manner as many grains, collected, and ground, and mixed together into one mass, make one bread; so in Christ, who is the heavenly bread, we may know that there is one body, with which our number is joined and united” On the Sacrament of the Cup of the Lord No 13—Article by Sandra Sweeny Silver 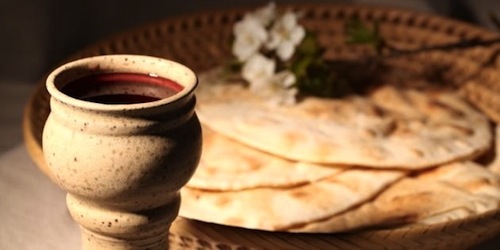