“The Duchess of Orleans (1644–1670) relates that the irreverent old calumniator, Marshal Villeroi (1644—1730), who in his youth had known St. Francis de Sales (1567—1622) said, on hearing him called saint: ‘I am delighted to hear that Monsieur de Sales is a saint. He was fond of saying indelicate things, and used to cheat at cards. In other respects he was a perfect gentleman, though a fool.’” (from Ambrose Bierce’s 1911 Devil’s Dictionary). What a sarcastic man was this Villeroi.

Paul, often called Saint Paul, could be a firebrand. He was just what God needed to ignite the Early Church. Paul wrote 14 of the New Testament’s 27 books. The 501,190 words Paul penned are some of the most cherished words in the world.

Some of the early Saint’s words, however, were biting and sarcastic— as were these words to the wayward, immoral and gullible church in Corinth who had been deceived from proper doctrine by others calling themselves “apostles of Christ” and were impugning Paul’s work:

“Let no one take me for a fool. But if you do, then tolerate me just as you would a fool, so that I may do a little boasting. In this self-confident boasting I am not talking as the Lord would, but as a fool. Since many (of the false apostles) are boasting in the way the world does, I too will boast. You gladly put up with fools since you are so wise! In fact, you even put up with anyone who enslaves you or exploits you or takes advantage of you or puts on airs or slaps you in the face. To my shame I admit that we were too weak for that! Whatever anyone else dares to boast about—I am speaking as a fool—I also dare to boast about. Are they Hebrews? So am I. Are they Israelites? So am I. Are they Abraham’s descendants? So am I. Are they servants of Christ? I am out of my mind to talk like this. I am more.” II Corinthians 11:16-23 (written c. 55 AD)

In this instance Paul was furious when he heard what was going on in Corinth. He was protective of his new converts. The supposed apostles who had entered Corinth had corrupted the Gospel Paul had preached to them and they even demanded to be paid. The Corinthians embraced the new ideas and had lapped up everything those “super-apostles ” had taught them. Paul was not happy, as one can see from his sarcasm.

The Oxford English Dictionary defines “sarcasm” as “a way of using words that are the opposite of what you mean in order to be unpleasant to somebody or to make fun of them.” Our English word “sarcasm” has its root in the Greek work sarkazein “to speak bitterly, sneer,” literally “to strip off the flesh.” Greek word sarx (genitive sarkos) “flesh,” properly “piece of meat.” Sarcasm is aimed to hurt.
Sarcasm is sometimes precipitated by anger and Paul was in full bloom with anger. He goes on in this second letter to the Corinthians:

“I have made a fool of myself, but you drove me to it. I ought to have been commended by you, for I am not in the least inferior to the ‘super-apostles,’ even though I am nothing. I persevered in demonstrating among you the marks of a true apostle, including signs, wonders and miracles. How were you inferior to the other churches, except that I was never a (financial) burden to you? Forgive me this wrong!” II Corinthians 12;11-13

Paul was using forceful and sarcastic words with the Corinthians. Apparently when he was among them, he was not a charismatic speaker: “…unimpressive and his speaking amounts to nothing.”

“I do not want to seem to be trying to frighten you with my letters. For some say, ‘His letters are weighty and forceful, but in person he is unimpressive and his speaking amounts to nothing.’ Such people should realize that what we are in our letters when we are absent, we will be in our actions when we are present.” II Corinthians 10:9-11

Paul warns them he will be more stern and and “weighty” when he returns to them if they don’t repent and return to the Gospel he preached to them. It seems from this passage that Paul’s pen was mightier than his personal presence.

Paul’s letter to the believers in Galatia, a region in what is now Turkey, is very passionate. Paul evangelized many cities in this region including Ancyra which endures as the modern capital of Turkey—Ankara (see below). 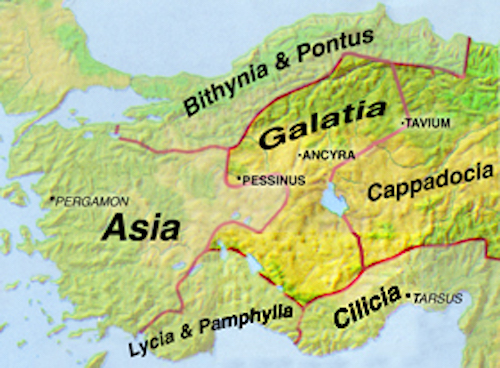 Paul wrote his letter to the Galatians sometime between c. 48 and c. 53. One of the main disagreements and questions in the early church was: should the Gentiles who were accepting Christ be forced to be circumcised and to obey all the laws in the Old Testament. The Jewish Christian men who believed they should are called Judaizers. In c. 50 AD, Paul forced the question before the Mother Church in Jerusalem (composed of the Apostles and James, the brother of Jesus, as their bishop).

They all agreed that it was not necessary for new converts to be circumcised. But the Judaizers persisted and that was the problem in Galatia. Paul confronts the churches in Galatia who are believing “those agitators”:

“It is for freedom that Christ has set us free. Stand firm, then, and do not let yourselves be burdened again by a yoke of slavery. Mark my words! I, Paul, tell you that if you let yourselves be circumcised, Christ will be of no value to you at all.….For through the Spirit we eagerly await by faith the righteousness for which we hope. For in Christ Jesus neither circumcision nor uncircumcision has any value. The only thing that counts is faith expressing itself through love. You were running a good race. Who cut in on you to keep you from obeying the truth? That kind of persuasion does not come from the one who calls you….The one who is throwing you into confusion, whoever that may be, will have to pay the penalty….As for those agitators (who preach need for circumcision), I wish they would go the whole way and emasculate themselves!” Galatians 5:1-12

Would Paul really want any man to castrate himself? The overwhelming opinion of translators says YES. (See the translations of Galatians 5:12 in: NIV, ESV, NASB, ISV, GOOD NEWS, etc.)

But you and I know Paul was just being sarcastic.