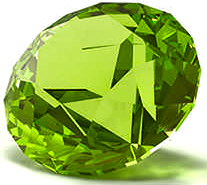 This writer was born in August. According to modern gemologists, I, as a zodiac Leo, should be wearing a peridot ring. I have never had the August birthstone peridot (left) nor have I ever wanted one.

If I had been born in May, I would love that deep emerald green. January has the pretty red garnet and July births can sport red, red Rubies. Were I born in April, a great sparkling diamond would be a nice Birth Day present. 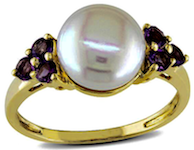 Who decided we all should have Birth Stones? Why did he/she/them give me, born in August, such a none-such birth stone and give themselves, their mothers, female siblings, wives all the really good stuff like sapphires and pearls and amethysts (right).

Our modern American birthstone list was formulated in 1912 by an organization known as “The Jewelers of America.” And “they” have been changing the list ever since. Some lists of modern Birth Stones even have 3 gems for August and usually more than 1 gem for all the 12 months. We in America are at the “mercy” of The Jewelers of America.

Let’s see if we can trace these “12 precious stones” way back in history. Twelve (12) is in numerology the “number of corporate completeness.” There are 12 months in a year; 12 signs of the zodiac; the Greeks had 12 Olympian gods and goddesses; the Jews had 12 tribes; there are 12 hours in a day and 12 hours in a night; In women’s lacrosse, each team has 12 players on the field at any given time; in an NBA game, a quarter lasts 12 minutes; the Twelve-bar Blues is one of the most prominent chord progressions in popular music; in a trial 12 jurors are picked… 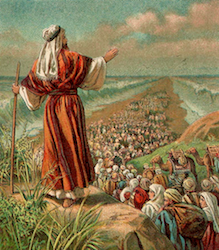 Where in our long history do we first see 12 precious stones which our long history has eventually chosen to designate “Birth Stones?” In the Old Testament in the Bible 12 precious gem stones were first described in the book of Exodus, written in c. 1,500 BC as one of the 5 books in the Torah/Pentateuch—the first 5 books of the Bible. In those very early years of the Bible, the Jews were wandering in the Wilderness under the leadership of Moses after they had been freed from Egyptian slavery. (Exodus12:31-39)

On Mt. Sinai God gave Moses the 12 Commandments (Exodus 20: 1-17). In Exodus 28 the Lord tells Moses to separate his brother Aaron from the rest of the Hebrews and appoint him High Priest. A garment was made to distinguish the High Priest from all the other Jews. The Lord inspired exactly the pattern of the breastpiece for Aaron’s garment and the materials and gems for decoration:

“Fashion a breastpiece for making decisions—the work of skilled hands. Make it like the ephod: of gold, and of blue, purple and scarlet yarn, and of finely twisted linen. It is to be square—a span long and a span wide (9” by 9”)—and folded double. Then mount four rows of precious stones on it. The first row shall be carnelian, chrysolite and beryl; the second row shall be turquoise, lapis lazuli and emerald; the third row shall be jacinth, agate and amethyst; the fourth row shall be topaz, onyx and jasper. Mount them in gold filigree settings. There are to be twelve stones, one for each of the names of the sons of Israel, each engraved like a seal with the name of one of the twelve tribes. Exodus 28:15-21 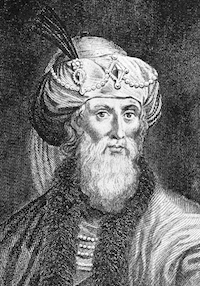 “Besides these, the High Priest put on a third garment, which was called the Ephod: which resembles the Epomis of the Greeks. Its make was after this manner. It was woven to the depth of a cubit, of several colours, with gold intermixed, and embroidered; but it left the middle of the breast uncovered. It was made with sleeves also. Nor did it appear to be at all differently made from a short coat. But in the void place of this garment there was inserted a piece of the bigness of a span, embroidered with gold, and the other colours of the Ephod. It is called Essen [the Breast-plate] which in the Greek language signifies the Oracle. This piece exactly filled up the void space in the Ephod.

It is united to it by golden rings at every corner, the like rings being connected to the Ephod; and a blue ribband was made use of to tie them together by those rings; and that the space between the rings might not appear empty, they contrived to fill it up with stitches of blue ribbands. There were also two Sardonyxes upon the Ephod; at the shoulders, to fasten it, in the nature of buttons, having each end running to the Sardonyxes of gold, that they might be buttoned by them. On these were engraven the names of the sons of Jacob, in our own country letters, and our own tongue: six on each of the stones, on either side: and the elder sons names were on the right.

Twelve stones also there were upon the breast-plate, extraordinary in largeness and beauty: and they were an ornament not to be purchased by men, because of their immense value. These stones however stood in three rows, by four in a row, and were inserted into the breast-plate it self, and they were set in ouches of gold, that were themselves inserted in the breast-plate: and were so made, that they might not fall out. Now the first three stones were, a sardonyx, a topaz, and an emerald. The second row contained a carbuncle, a jasper, and a sapphire. The first of the third row was a ligure, then an amethist, and the third an agate; being the ninth of the whole number. The first of the fourth row was a chrysolyte, the next was an onyx, and then a beryl, which was the last of all. Now the names of all those sons of Jacob were engraven in these stones, whom we esteem the heads of our tribes; each stone having the honour of a name, in the order according to which they were born.” 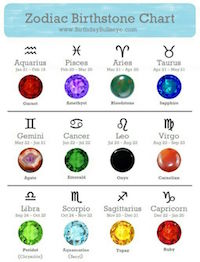 “…each stone having the honour of a name in the order according to which they were born.”

Here in Josephus’ Antiquities, 1,600 years after the Book of Exodus in the Bible, we seem to have the first hint that perhaps each of the 12 stones on Aaron’s Breast Plate gradually became the unique Birth Stone of people born in certain months.

This writer would, also, opine that the 12 stones represented the 12 signs of the zodiac long before they came to represent a personal birth day month. 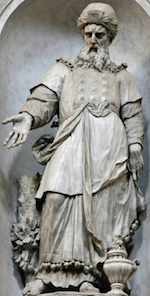 3,000 years after Aaron’s breastpiece was described and made, this sculpture in the Santa Maria del Rosario Church (1524) in Venice, Italy, depicts the same Chief Priest Aaron, brother of Moses, wearing the priestly breastplate with 12 precious stones arranged in four rows of three (left).

Pick your own favorite gem and wear it. All of them were once “holy.” Do you want to be “holy” or do you want to really like that ring? Given the trend of fluctuating birth stones, that’s not a binary choice.—Sandra Sweeny Silver