“Trimalchio’s Banquet” in Petronius’ Satyricon 28-41 (c. 75 AD) is the most complete description in ancient literature of the dinner parties of the super-rich. As the first century came to a close, there was an increasing number of people from the upper-socio-economic classes who had become and were becoming Christians. When they became Christians, they did not abandon the homes and foods and stuff they had just like wealthy Christians among us today all over the world do not give up their worldly wealth when they become Christians. But the wealthy Christians in ancient Rome and today become and became benefactors (from Latin words “bene+facere” meaning “to do well, a good deed”) of the poor and those brothers and sisters in Christ who were in need. The wealthy Christians then as the wealthy Christians now gave lavish dinner parties for their saved friends and their unsaved friends. No one, however, in the 21st century gives dinner parties like the one Trimalchio and other wealthy pagan Romans did.

The parvenu Trimalchio, ostentatious and crude, was not a saved slave but a freed slave, a liberti, who had become wealthy through trade and business deals. In spite of his wealth, Trimalchio was still ostracized from polite society and resorted to recruiting strangers on the streets for his banquets. Before going to his home for dinner, Trimalchio takes his lowlife, impromptu guests to a Bath. One of the reprobates describes the experience: 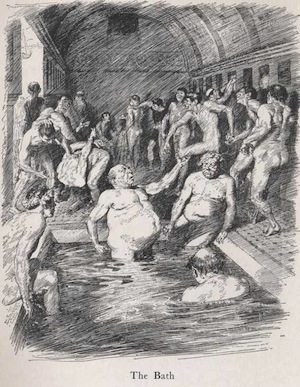 “…we entered the baths where we began sweating at once and we went immediately into the cold water. Trimalchio had been smothered in perfume and was already being rubbed down, not with linen towels, but with bathrobes of the finest wool….three masseurs sat drinking Falernian (an expensive wine) in front of him…(Later), wrapped in thick scarlet felt (Trimalchio) was put into a litter….We followed on, choking with amazement by now, and arrived at his doorway….as we were stepping forward, a slave with his back bare flung himself at our feet and began pleading with us to get him off a flogging. He was in trouble for nothing very serious…the steward’s clothes, hardly worth ten sesterces, had been stolen from him at the baths….Finally, we took our places (at 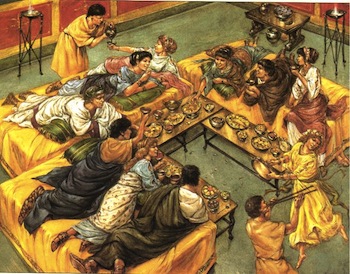 the dinner table). Boys from Alexandria poured iced water over our hands. Others followed them and attended to our feet, removing any hangnails with great skill….The dishes for the first course included an ass of Corinthian bronze with two panniers, white olives on one side and black on the other. Over the ass were two pieces of plate with Trimalchio’s name and the weight of the silver inscribed on the rims. There were…dormice (mice) sprinkled with honey and poppy seed…steaming hot sausages on a silver gridiron with damsons and pomegranate seeds underneath….

Trimalchio was carried in and set down on a pile of tightly stuffed  cushions….On the little finger he wore a heavy gilt ring and a smaller one on the last joint of the next finger…studded with little iron stars. And to show off even more of his jewelry, he had his right arm bare and set off by a gold armlet and an ivory circlet….a tray was brought in with a basket on it. There sat a wooden hen….Two slaves hurried up and as the orchestra played a tune, they began searching through the straw and dug out peahens’ eggs which they 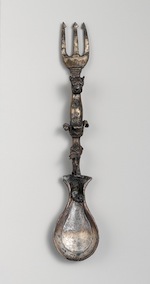 distributed to the guests….We took up our spoons and cracked the eggs which were made of rich pastry….I heard a guest who was an old hand say, ‘There should be something good here.’ So I searched the shell with my fingers and found the plumpest little figpecker (an Orphean warbler), all covered with yolk and seasoned with pepper….A young Egyptian slave carried around bread in a silver oven….four dancers hurtled forward in time to music and removed the upper part of (a) great dish, revealing underneath plump fowls, sows’ udders, and a hare with wings fixed to his middle to look like Pegasus….a peppery fish sauce (ran) over some fish which seemed to be swimming in a little channel (of sauce)….a man with a carving knife and, with his hands moving in time to the music of the orchestra, sliced up the victuals….Carefully sealed wine bottles were immediately brought, their necks labeled: FALERNIAN. CONSUL OPIMIUS. 100 YEARS….(Trimalchio) said with a sigh: ‘Wine has a longer life than us poor folks. So let’s wet our whistles. I’m giving you real Opimian’….the next course was brought in…

it was so novel that everyone stared. It was a deep circular tray with the twelve signs of the Zodiac arranged round the edge. Over each of them the chef had placed some appropriate dainty suggested by the sign. Over Aries the Ram, chickpeas; over Taurus the Bull, a beefsteak; over the Heavenly Twins, testicles and kidneys; over Cancer the Crab, a garland; over Leo the Lion, an African fig; over Virgo, a young sow’s udder; over Libra the Scales, a balance with a cheesecake in one pan and a pastry in the other; over Scorpio, a sea scorpion; over Sagittarius the Archer, a sea bream with eyespots; over Capricorn, a lobster; over Aquarius, a wild goose, over Pisces, two mullets….

Fresh servants entered and spread carpets before (our) couches, embroidered with pictures of fowling nets, (men) with their hunting spears and sporting gear of all kinds. We were still at a loss what to expect when a tremendous shout was raised outside the doors, and lo and behold, a pack of Laconian dogs came careening round and round the table. These were soon succeeded by a huge tray on which lay a wild boar of the largest size, with a cap on its        head, while from its tusks hung two little baskets of woven palm leaves, one full of Syrian dates, the other of Theban. Round (the boar) were little piglets of baked sweetmeat, as if at suck to show it was a sow we had before us and these (piglets) were gifts to be taken home with (us)….

To carve the (boar)…a great bearded fellow, wearing leggings and a shaggy jerkin (entered). Drawing his hunting knife, he made a furious lunge and gashed open the boar’s flank, from which there flew out a number of birds. Fowlers stood ready with their rods and immediately caught the birds as they fluttered about the table. Then Trimalchio directed each guest to be given his bird, and this done, he added, ‘Look, what elegant acorns this wildwood pig fed on.’ Instantly slaves ran to the baskets that were suspended from the animal’s tusks and divided the two kinds of dates in equal proportions among the diners.”

It would be almost 1,000 years after the fall of Rome before such sumptuous “Surprise Feasts” would again be given by the rich during the Middle Ages.—Sandra Sweeny Silver 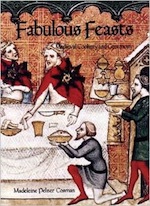