“It has been said that the lives of early Christians consisted of ‘persecutions above ground and prayers below ground.’ Their lives are expressed by the Colosseum and the catacombs.” John Foxe, Book Of Martyrs 2 (1563)

Above ground with the aqueducts and below ground with the catacombs Roman technical skill and pragmatic ingenuity would be the plumb line for 2,000 years after her fall. 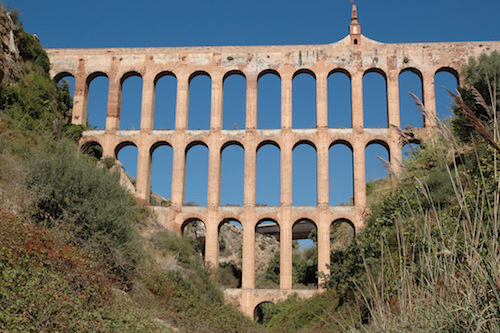 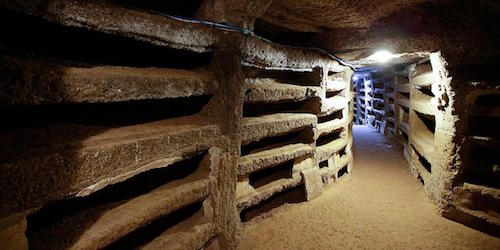 The soil under the city of Rome is of volcanic origin. The second layer of the earth contains a rock called tufa, a soft, malleable and porous rock made of compacted volcanic ash. Because of tufa’s softness, it was the perfect medium for fashioning an underground cemetery. When it is exposed to air, tufa hardens enough that these underground catacombs have survived for over two thousand years.

There are over 40,000 inscriptions in the catacombs. the great majority of the Christian inscriptions say “In Pace,” meaning “In Peace,” essentially “At Peace Because I Know Where I Am Going After I Die.” They will be with their Savior. 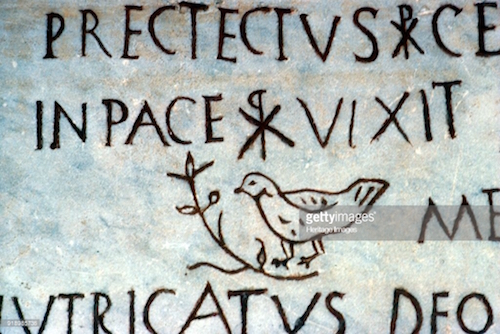 In addition to “In Pace,” the inscription above has two “Chi Rhos,” on it. The Chi Rho (prominent in the inscription below)) is one of the earliest Christian symbols. [CLICK HERE for article on the meaning of Chi Rho.] 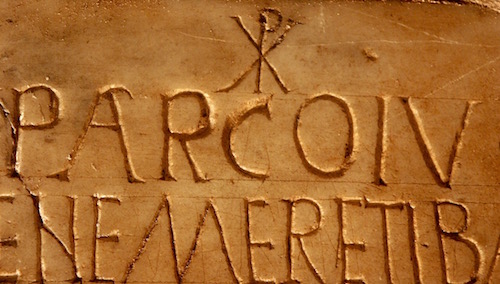 Other common Christian inscriptions say “Reborn” (Renatus) and “Born Again In Jesus.” The “Day of Birth” (Dies Natalis) into eternal life gives a fresh meaning to death on several Christian graves. “DM” meaning “Highest God” (Deo Maximo) is a prominent inscription, as is the Pace.

The ancient grave inscription below has at the left a crude image of Christ calling forth Lazarus from his grave in John 12:16-18: “At first His disciples did not understand these things, but after Jesus was glorified they remembered what had been done to Him, and they realized that these very things had also been written about Him. Meanwhile, many people continued to testify that they had been with Jesus when He called Lazarus from the tomb and raised him from the dead. That is also why the crowd went out to meet Him, because they heard that He had performed this sign.”

The “DATO PARENTES” (meaning “Parents Gave/Made“) made the above inscription for their 20-year-old child who “has well-deserved”  the eternal life represented by Lazarus’ resurrection. 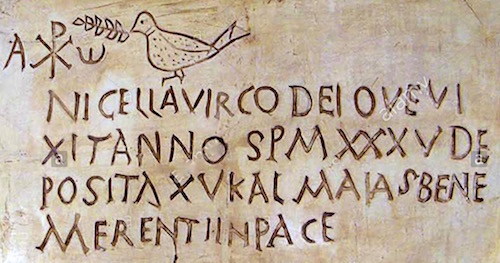 Many graves have Deposito inscribed on them. The particular inscription above has “deposita” on the 2nd and 3rd line. The person in this grave was 35 when he/she died and “well deserved/merited” the Christian promise of eternal life. The buried one is “In Pace.” The dove and olive branch represent both the Holy Spirit and the dove that returned to the Ark to let Noah know that the floods were receding and he and his family could come out and be safe.

Our word “deposit” comes directly from the Latin word used in this inscription. A deposit is something laid aside or given in trust. The dead body is the frail deposit given for the solid hope of life eternal as the New Testament indicated: 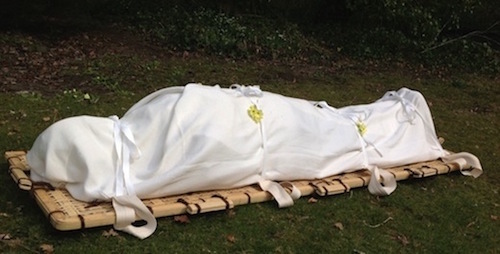 “Now we know that if the earthly tent we live in is destroyed, we have a building from God, an eternal house in heaven, not built by human hands. Meanwhile we groan, longing to be clothed with our heavenly dwelling….so that what is mortal may be swallowed up by life. Now it is God who has made us for this very purpose and has given us the Spirit as a deposit, guaranteeing what is to come. Therefore we are always confident and know that as long as we are at home in the body, we are away from the Lord. We live by faith, not by sight.” II Corinthians 5:1-7 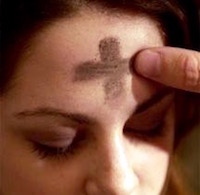 “…having believed, you were marked in him with a seal, the promised Holy Spirit who is a deposit guaranteeing our inheritance until the redemption of those who are God’s possession.” Ephesians 1: 13, 14

“He anointed us, set his seal of ownership on us, and put his Spirit in our hearts as a deposit, guaranteeing what is to come.” II Corinthians 1:22

The catacomb Christians believed their dead bodies were the necessary seed deposit for the resurrection of the spiritual body in the life to come. In mortal life they had been officially sealed by the Holy Spirit as a sure guarantee of their resurrection in the life to come. To early Christians’ Deposito on a tomb also meant—deposited in corruption, raised incorruptible. They believed the dead body had to be sown (deposited) in order to reap the spiritual body. Your dead body was your deposit on eternal life with God Who is spirit. John 4:24 Deposito shortens Paul’s words in I Corinthians 15:35-45: 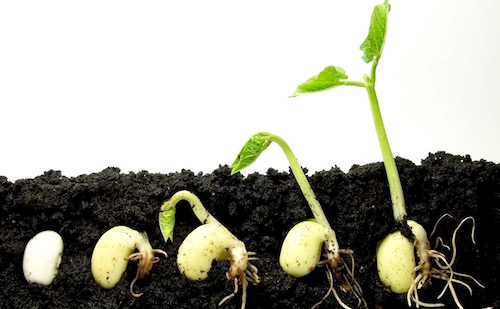 “But someone may ask, ‘How are the dead raised? With what kind of a body will they come?….What you sow does not come to life unless it dies. When you sow, you do not plant (deposit) the body that will be but just a seed perhaps of wheat….So will it be with the resurrection of the dead. The body that is sown is perishable…it is sown a natural body; it is raised a spiritual body.”

The physical body is like an acorn, perhaps, or a seed of corn. When it is planted in the earth, it must first rot and die. Only then can it become the huge oak tree or the graceful stalk of corn.

It must be emphasized that the catacomb Christians and all peoples living at that time were much more attuned to symbols and arcane meanings than people of the 21st century. They were steeped in myths and mysteries and metaphors and omens and divinations and allegories. Everything that happened meant something and every thing had a riot of meanings around it. To enter the world of catacomb inscriptions and of early Christian symbols is to enter a very rich, deeply intellectual and poetic world of meanings.—Article by Sandra Sweeny Silver